Zoom has become the de facto standard for online communications during the pandemic, but the company has found that it’s still a struggle for many employees to set up the equipment and the software to run a meeting effectively. The company’s answer is an all-in-one communications appliance with Zoom software ready to roll in a simple touch interface.

The device, dubbed the Zoom for Home – DTEN ME, is being produced by partner DTEN. It consists of a standalone 27-inch screen, essentially a large tablet equipped with three wide-angle cameras designed for high-resolution video and 8 microphones. Zoom software is pre-loaded on the device and the interface is designed to provide easy access to popular Zoom features. 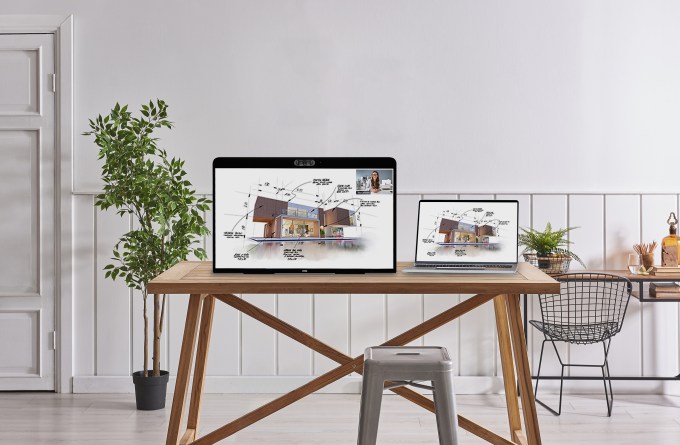 Zoom for Home – DTEN ME with screen sharing on. Image Credits: Zoom

Jeff Smith, head of Zoom Rooms, says that the idea is to offer an appliance that you can pull out of the box and it’s ready to use with minimal fuss. “Zoom for Home is an initiative from Zoom that allows any Zoom user to deploy a personal collaboration device for their video meetings, phone calls, interactive whiteboard annotation — all the good stuff that you want to do on Zoom, you can do with a dedicated purpose-built device,” Smith told TechCrunch.

He says this is designed with simplicity in mind, so that you pull it out of the box and launch the interface by entering a pairing code on a website on your laptop or mobile phone. Once the interface appears, you simply touch the function you want, such as making a phone call or starting a meeting, and it connects automatically. 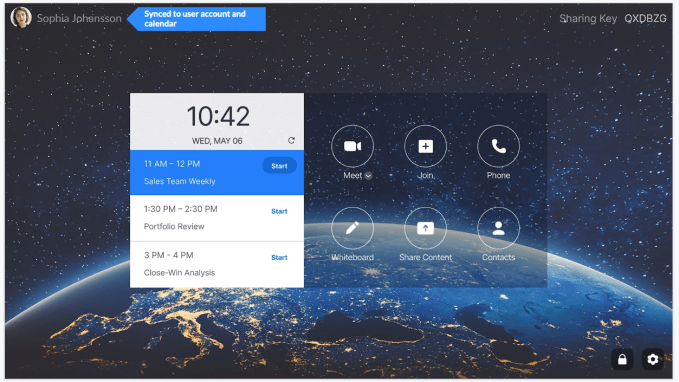 You can link it to your calendar so that all your meetings appear in a sidebar, and you just touch the next meeting to connect. If you need to share your screen it includes ultrasonic pairing between the appliance and your laptop or mobile phone. This works like Bluetooth, but instead of sending out a radio signal, it sends out a sound between 18 and 22 kHz, which most people can’t hear, to connect the two devices, Smith said.

Smith says Zoom will launch with two additional partners, including the Neat Bar and the Poly Studio X Series, and could add other partners in the future.

The DTEN appliance will cost $599 and works with an existing Zoom license. The company is taking pre-orders and the devices are expected to ship next month.