The next time Harold and Kumar go to a White Castle, there may be a robot making their French Fries.

In one of the first trials of a robotic fry cook at a national burger chain, White Castle said it would work with Pasadena, Calif.-based Miso Robotics to test that company’s robotic chef at a restaurant in the Chicago area. It’s a  trial run for potentially bringing the robot to other White Castle kitchens across the country, the company said.

White Castle first began talking about using the Miso Robotics robots in its kitchens about nine months ago according to White Castle’s vice president of shareholder relations, Jamie Richardson. For the company, it was a question of, “How can we start to make the kitchen of tomorrow today?”

Already a success on social media, where videos of Miso Robotics’ Flippy robot have racked up hundreds of thousands of views, White Castle was intrigued about the prospects of a burger flipping, chicken, onion, and french frying robot in its locations, Richardson said.

“I think automation is here to stay and this is the first example of a really large credible player starting down that journey,” said Miso Robotics chief executive Buck Jordan of the new collaboration with White Castle.

White Castle has a fairly interesting track record when it comes to working with startups. The company was the first fast food chain to embrace Impossible Foods for its sliders.

At an undisclosed restaurant in the Chicago area, Miso Robotics is already working to install the latest version of its Flippy robot. The robotic fry cook will be integrated with the company’s point of sale system so that the robot can begin preparation as soon as an order is taken at the register.

The robotic fry cook Flippy is getting a new look

That first robot will be coming online in September, according to Richardson.

And Richardson said that White Castle employees don’t need to worry about a robot coming for all of their jobs… yet.

“It’s going to save us money in food costs because there will be less waste,” said Richardson.  “The other savings will be in terms of output… that’s going to be helpful.. If you maintain speed of service that’s getting a little bit better and a little better you do see more visits… that’s where we see it having the biggest impact… we’re not looking at this as a way to reduce people power.”

A typical installation of a Miso Robotics system in a kitchen would cost a restaurant $30,000 upfront and then another $15,000 per year. However, with White Castle, the terms (which were undisclosed) were a little different.

Jordan said the goal is to bring the cost of the robotic system down to $15,000 for the entire system, obviating the need for any upfront costs, and convincing restaurants and franchisors that the robot can pay for itself right out of the gate.

“There’s a clear path to getting that down to 20K,” said Jordan. “I’m trying to chisel that down to 15K,… at that kind of price and these things have lifetimes of seven to ten years we can afford to take the loss upfront.”

The robots have taken on new significance in the post COVID-19 era as restaurants like White Castle become essential services even as they struggle to keep the lights on with fewer customers.

At White Castle that meant pay cuts for executives in order to retain staff. “We cut a lot of investment and we didn’t want to lose one job,” Richardson said. However, even with the strategic cuts, the implementation of at least this first robotic system remained a priority.

“There were things that we thought, COVID or no COVID were important,” Richardson said. “This project falls under that banner.”

White Castle’s decision to pilot Flippy in the kitchen creates an avenue for reduced human contact with food during the cooking process – reducing potential for transmission of food pathogens. The implementation also brings intelligence to cooking, tapping into sensors, intelligent monitoring and anticipated kitchen needs to keep food temperatures consistent, that ensure optimal quality and a perfect bite for customers. With Flippy in the kitchen automating repetitive, time consuming and dangerous tasks like frying, team members can be redeployed to more customer-experience driven tasks. 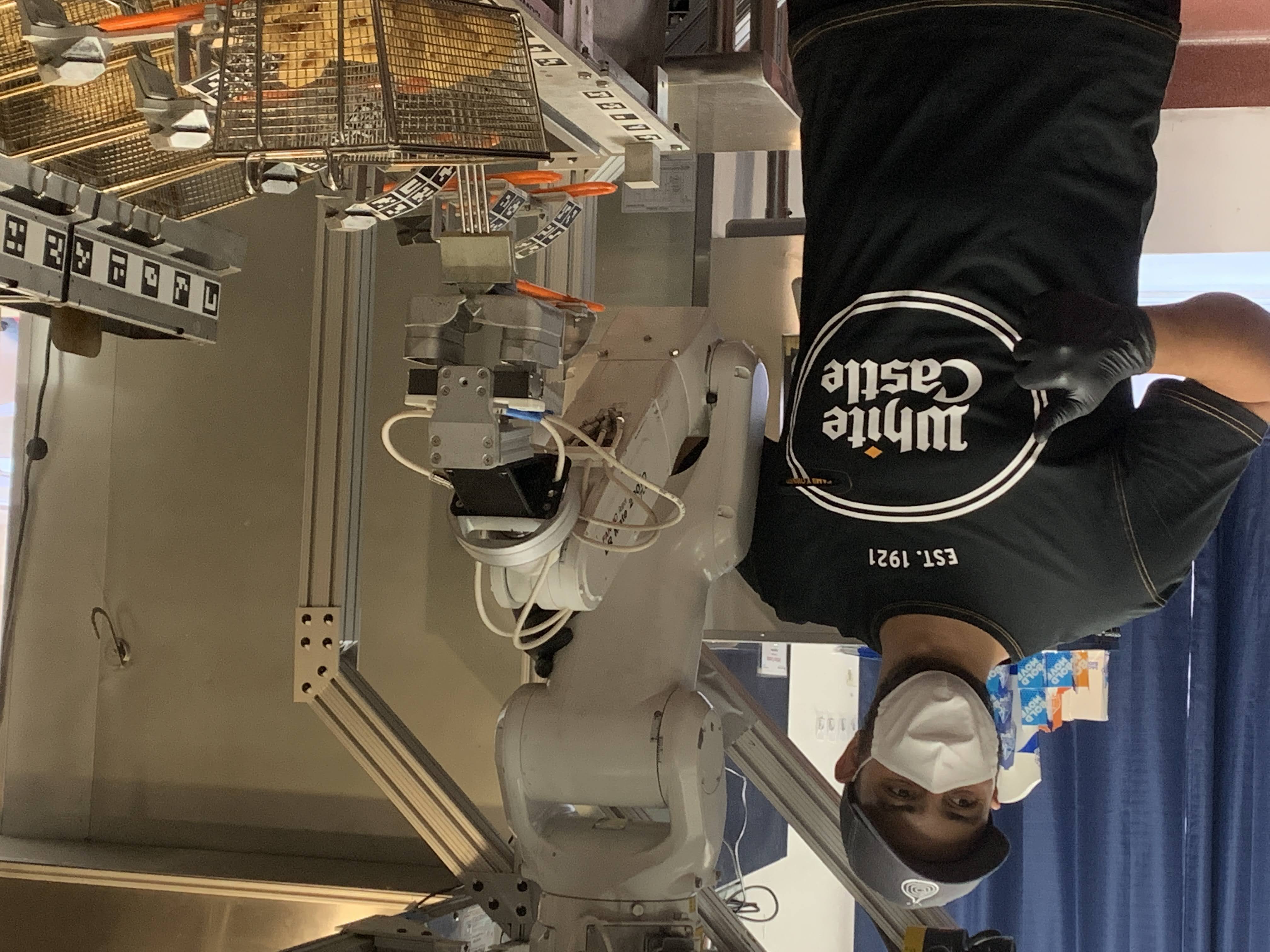