I have to admit, I was an e-bike virgin. Sure, I’d tried out Uber’s Jump bikes and similar e-bikes, but these are more like normal bikes “with a little extra help.” So when I was offered the chance to try out the new VanMoof S3, an e-bike that has literally been built from the ground up, I was excited at how different the experience might be.

Perhaps more significantly, I had a particular task in mind for it. In the current COVID-19 pandemic much has been made of cities being transformed into proverbial deserts, as traffic and pedestrians disappeared. Now, with many cities coming out of lockdown, governments have advised their citizens to go back to work, desperate to get their economies moving. And they are pushing cycling as a viable alternative to public transport, where the virus is more likely to be found. So what better time would there be to try out an e-bike as a viable alternative to commuting to and from the suburbs of a large city? 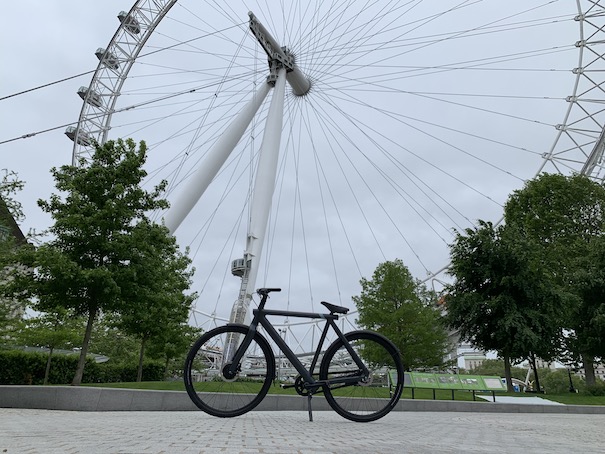 Indeed, the U.K. government has unleashed a £2 billion package to create a new era for cycling and walking.

In the U.S., New York City recently committed to adding protected bike lanes across Manhattan and Brooklyn. Berlin is extending some of its already extensive bike lanes. And Milan will introduce a five-mile cycle lane to cut car use after the lockdown. New York City has reported a 50% increase in cycling compared to this time last year, and cycling in Philadelphia has increased by more than 150% during the COVID-19 outbreak.

But much of the official advice is to avoid public transport where possible, due to the near-impossibility of social distancing.

So with cycling a viable option in many cities, but distance still the old adversary, many consumers are looking to e-bikes as a way to kill two birds with one stone. Not only can you socially distance, but you can also take the bikes on much longer commutes than is possible with traditional bikes and, dare I say it, traditional legs.

With London still on lockdown recently, I decided to try out the new VanMoof S3 on the deserted streets, cycling from the deep London suburbs right into the empty center of the city. 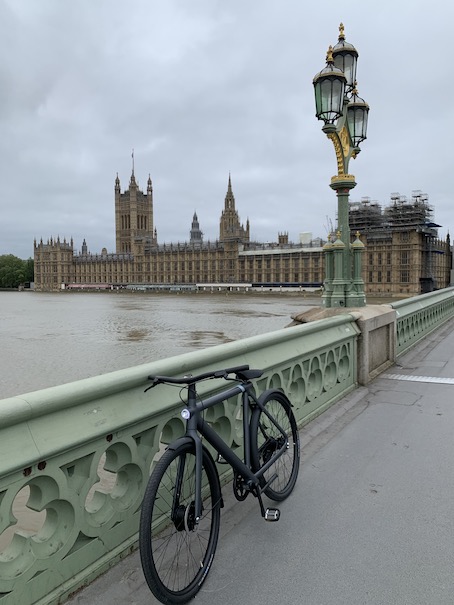 The bike
For starters, it’s worth saying that the VanMoof S3 is a handsome bike. As a significant upgrade to its previous version, it is similar in its good looks, but what’s “under the bonnet” is what counts.

The S3 is a full-size bike with 28-inch wheels. It has a 24-inch wheeled sister called the X3, which is more compact and it therefore technically “nippier” in the city; however, I found the S3 perfectly suited to London. In fact, its “chopper-like” handling felt very reassuring over London’s bumpy and often unkempt roads.

The S3 and X3 both cost $2,000. Both also come with four-speed automatic shifting and hydraulic brakes. They are cheaper than the previous S2 and X2 models, which only had two-speed automatic shifting and cable brakes. Although the frame construction is unchanged, VanMoof says it has achieved savings by making production more efficient. The bikes weigh about 41 pounds, which is very acceptable for an electric bike. You can get front and rear racks as accessories for pannier bags, cargo boxes or a child seat.

The range per charge varies somewhere between 37 and 93 miles, depending which power level you select on the smartphone app. Level 0 turns off the electric pedal assist, leaving the bike quite heavy to pedal, and level 4 boosts the bike continuously. For my jaunt around London I used Level 4 all the time and managed to get a full, and quick, 45 miles out of the bike without even breaking a sweat, showing that even the heaviest users would be well served by the S3. If you are concerned about your battery charge level, this is displayed on top of the cross-bar, which also shows you current speed. It takes four hours to charge the bike to 100%, but just under an hour and a half to get to 50%. 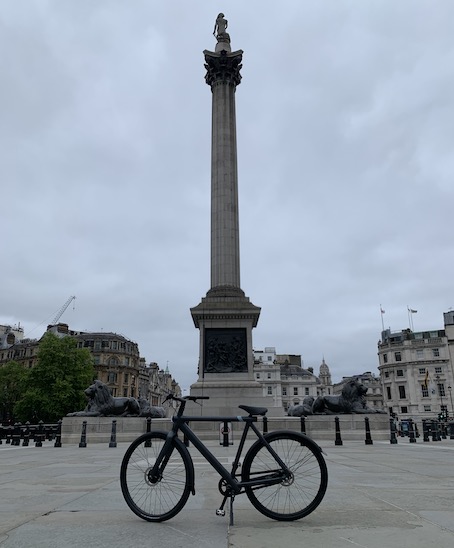 The VanMoof is driven by a front hub motor and in “European mode” gives a continuous power of 250 watts. But to get more speed you can select the U.S. setting, tick a disclaimer and get 350W of continuous power, with peak power-hitting 500W via the Boost button on the right handlebar. That means you can take off at the lights very easily and quickly get ahead of the traffic, while the normal pedal assist will suffice for most needs. The Boost is particularly useful when going up hills, which the S3 seemed to devour on my ride through London.

Thieves will find this bike frustrating. The rear brake locks when you tap the button near the rear hub. All parts apart from the handlebars and seat post require a special tool to undo. The headlight and taillight are integrated into the frame. The tires are large and puncture-resistant and covered by large metal fenders with integrated mud flaps.

If a thief tries to wheel away the bike when it’s locked it will immobilize the rear wheel and belt out a loud alarm. If the thief persists, a more shrill alarm will sound, the headlights and taillight will flash, a notification will appear on your phone and the bike will refuse to work at all. Only VanMoof can then re-enable the bike using the bike’s built-in cellular data connection and Bluetooth. The bike will sense the phone in your pocket as you approach, allowing you to unlock the rear wheel — and the app always shows the bike’s current location.

VanMoof’s three-year, $340 “Peace of Mind” plan means that it guarantees to find or replace your bike if it gets stolen (assuming it was locked). In the meantime, you will get a bike on loan, although this plan is only available in cities where VanMoof has a presence.

One possible drawback of having the battery welded inside the bike is the necessity of needing to be near a power outlet every time it needs charging. This drawback will be limited to those who are unable to take the bike up to an apartment, or fear for the bike’s safety if it has to charge outside a house. Yes, the hard-wired battery might well be a security “feature,” but this may well be a deal breaker for many, forcing them to look to other bikes which have removable batteries. That said, you are likely to pay more for the bike in the first place. 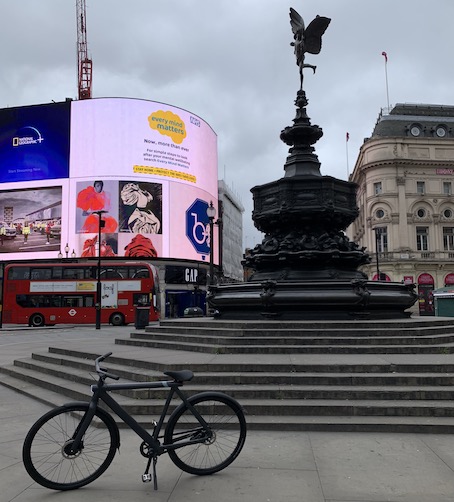 The journey
As for my test around London, to put the bike through its paces I cycled from the deep suburbs right into the heart of the West End. I’d like to say people asked me about the bike, but no one was around to impress! At the time of the test, London was in full lockdown and eerily quiet.

Hitting the Boost button felt like the “Punch it, Chewy” moment from Star Wars, as I pulled away from traffic. I unwittingly rode the bike at Level 4 all the way there and back, which meant that after about four hours and about 45 miles I ran out of charge on the last mile home. However, this was not a problem as I could cycle the last leg, despite it being a bit of a strain without any electrical assistance. Level 2 or 3 would probably have been a more ideal combination of power and range.

When you drive a Tesla you drive differently, zipping in and out of lanes. Similarly with this bike I realized I could overtake “normal” bikes effortlessly. Overall I’d say this is an excellent electric bike. 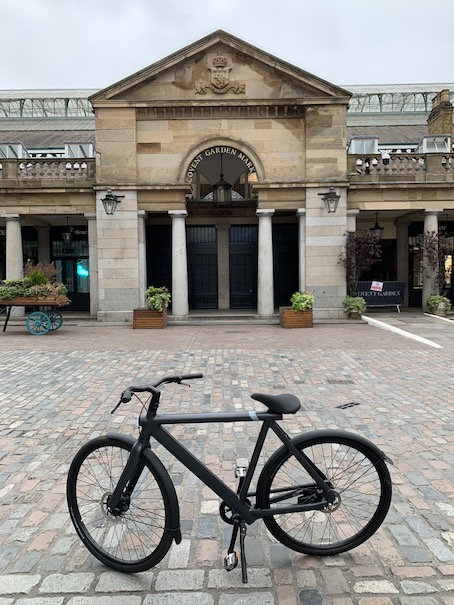 VanMoof, which was was founded in 2009 by Taco and Ties Carlier, two Dutch brothers, has now attracted a €12.5 million ($13.5 million) investment from London VC Balderton Capital and SINBON Electronics, the Taiwan-based electronics manufacturer which is VanMoof’s bike assembly partner. So expect to see this company ramp up its presence across Europe and the U.S.

Admittedly they are not the only VC-backed e-bike on the market. Brussels-based Cowboy is an e-bike startup which only appeared in 2017 but which has since raised $19.5 million from Tiger Global and London’s Index Ventures.

It looks like the e-bike wars have begun, they have.

[All pictures by Mike Butcher]