Amie, a new productivity app from ex-N26 product manager Dennis Müller, has picked up $1.3 million in pre-seed funding to “kickstart” development and hiring.

Backing 23-year-old Müller is Creandum — the European VC best known for being an early investor in Spotify — along with Tiny.VC and a plethora of angels. They include Laura Grimmelmann (Ex-Accel), Nicolas Kopp (CEO, N26 U.S.), Roland Grenke (Dubsmash co-founder) and Zachary Smith (SVP of product at U.S. challenger bank Chime).

Founded early this year and with a planned launch in early 2021, Berlin-based Amie is developing a productivity app that combines a person’s calendar and to-dos in one place. Previously called coco, it promises to work across all devices, with an interface that “works just like you think.”

“Back in the day, you had a calendar on your office wall, and a to-do list on a notepad,” Müller tells me. “You could take your list with you elsewhere, but not your calendar. Those were digitized instead of rethinking the flow. Most productivity apps solve very specific problems, creating a new one, [and] users need too many tools.” 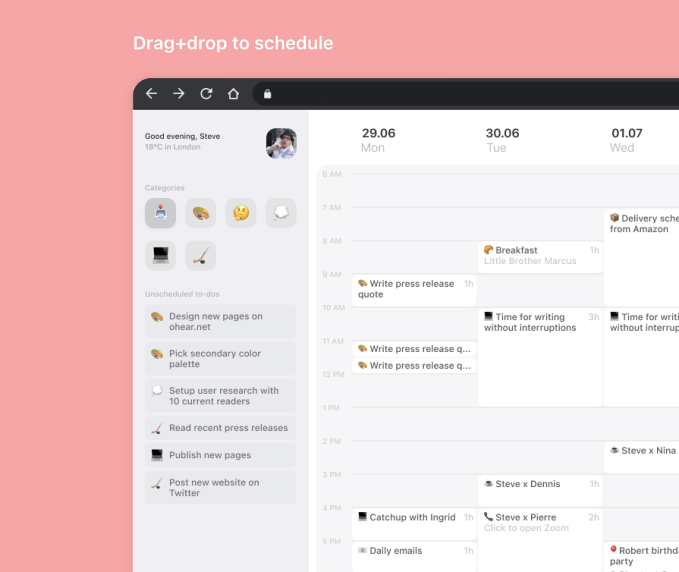 Müller says Amie is built on the principle that “to-dos, habits and events all take time, and all belong in the same place.” Many people already schedule to-dos and the startup wants to offer the fastest way to create to-dos, schedule events, check your calendar “and even jump into Zoom calls.”

As a glimpse of what’s to come, Amie promises to let you drag ‘n’ drop to-dos into your day, or turn links and screenshots into to-dos. “With Amie’s Alfred-like app, you can create an event and invite people in a different timezone, all while other apps are still loading,” says the young company.

More broadly, Amie wants to act as a central workspace, letting you also do things like join video calls, take notes and do email, without the need to open extra browser tabs and therefore avoid “context switching.”

“Amie will target professionals who are currently using Google Calendar, due to our integration,” adds Müller. “The waitlist already counts thousands of users, who are mostly professionals working in the tech industry (e.g., designers, developers, bizdevs, etc.”