Onna, the “knowledge integration platform” (KIP) that counts Dropbox and Slack as backers, has raised $27 million in Series B funding.

Leading the round is Atomico, with participation from Glynn Capital. Previous investors Dawn Capital, Nauta Capital and Slack Fund also followed on.

Founded in 2015, Barcelona and New York-based Onna integrates with a plethora of workplace apps, including Slack, Dropbox, G Suite, Microsoft 365 and Salesforce, to help unlock the proprietary knowledge stored in a company’s various cloud and on-premise software. Typical applications for a KIP include compliance, governance, archiving and “eDiscovery.”

From communication apps to cloud storage to HR platforms, the idea is to unify all of this data and make it searchable but in a way that is secure and protects existing permissions and privacy. In fact, another way to think of Onna is like Apple’s Spotlight functionality but for the enterprise. However, pitched as a platform not just a feature, Onna also offers an API of its own so that various use cases can be built on top of this “single source of truth.” 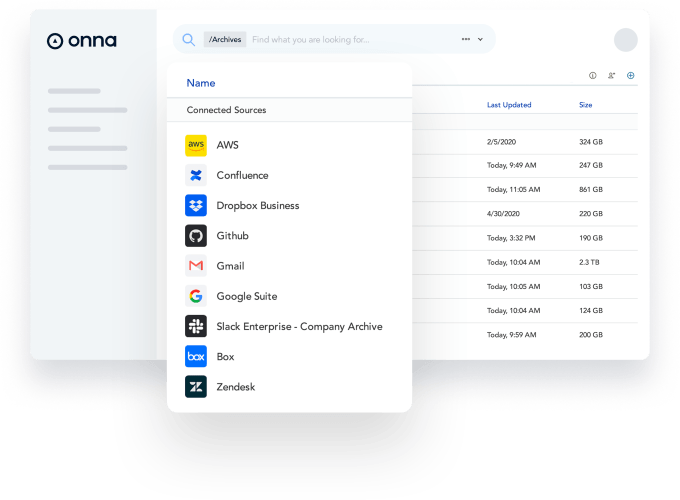 “Onna’s knowledge integration platform is a centralised, searchable and secure hub that connects company data wherever it resides and makes it easier and faster to make informed decisions,” Onna founder and CEO Salim Elkhou tells TechCrunch. “It is a productivity tool built for the way businesses work today… something that didn’t exist before, creating a new industry standard which benefits all companies within the ecosystem.”

Citing a report by single sign-in provider Okta, Elkhou notes that companies today use an average of 88 different apps across their workforce, a 21% increase from three years ago.

“The reason apps have become so popular is that they’re very effective for tackling specific challenges, or even a broad range of tasks. But the problem large organisations were coming up against is that their knowledge was spread across a wide range of apps that weren’t necessarily designed to work together.”

For example, a legal counsel could be looking to find contracts company-wide to assess a company’s exposure. The problem is that contracts may be saved in Salesforce, sent by email, shared over Slack or even saved on desktops. “Your company may have acquired another company, which has its own ways of saving information, so now the simple task of finding contracts can be a heavy lifting exercise, involving everyone’s time. With Onna, being the connective tissue across these applications, this search would take a split second,” claims Elkhou.

But the potential power of a KIP goes well beyond search alone. Elkhou says a more ambitious use case is unifying knowledge across apps and using Onna as infrastructure. “We believe that the next generation of workplace apps will be built on top of a knowledge integration platform like Onna,” he explains. “Due to our plug and play integrations with most enterprise apps and our open API, you can now build your own bespoke workflows on top of your company’s knowledge. More importantly, we handle all the heavy lifting on the back end when it comes to processing the right contextual information across multiple systems securely, which means you can get on with creatively building a more efficient workplace.”

“In Onna, we saw a product in a new and complementary category, providing a solution not at the data level but at the ‘knowledge level,’ ” adds Atomico’s Ben Blume, who has also joined the Onna board. “Onna’s core solution integrates with any tools in an organisation where knowledge resides, [and] ingests, indexes and classifies the knowledge inside, enabling it to power applications in many areas.”

Blume also points to the belief that some of the cloud tools vendors themselves have in Onna, with both Slack and Dropbox “investing, using and promoting” Onna’s solution. “As they look to grow their own penetration in organisations with a wider range of needs and demands, we saw partnering with Onna as a recognition of its best in class nature to their customers,” he says.

Meanwhile, I understand the new round of funding was done remotely due to lockdown, even though Atomico and Onna had already met and stayed in touch after the VC firm ended up not participating in the startup’s Series A.

Recalls Elkhou: “We had met with our investors in person over a year ago, and have had many video calls since and prior to the pandemic. However, soon after the lockdowns took effect, the need for remote collaboration tools skyrocketed which only accelerated the critical role Onna has in helping people within organisations access and share knowledge that was spread across an ever growing number of apps. If anything, it brought new urgency to the problem we were solving, because workplace serendipity no longer existed. You couldn’t answer questions over a coffee or by the water cooler, but these new remote workers still needed to access knowledge and share it securely.”