Finding somewhere in a Slack conversation, or stored in Box, Dropbox, Google Docs or Office 365, that one document you want to attach to an email is a huge challenge as we find ourselves spreading our content across a variety of cloud services. It’s one challenge that Cloudtenna has been trying to solve, and today the company announced a $2.5 million funding round along with the release of a new mobile search tool.

The funding comes from a variety of unnamed investors, along with Blazar Ventures, and brings the total raised to $6.5 million, according to the company.

Cloudtenna co-founder Aaron Ganek says that by using AI and document metadata, his company can find content wherever it lives. “What we’re really focused on is helping companies bring order to file chaos. Files are scattered everywhere across the cloud, and we have developed AI-powered applications that help users find files, no matter where they’re stored,” he said.

The company introduced a desktop search application in 2018 and today it’s announcing a mobile search tool called Workspace to go with it. Ganek says they built this app from the ground up to take advantage of the mobile context.

“Today, we’re bringing the search technology to smartphones and tablets. And just to be clear, this is not just a mobile version of our desktop product, but a complete case study in how people collaborate on the go,” he said. 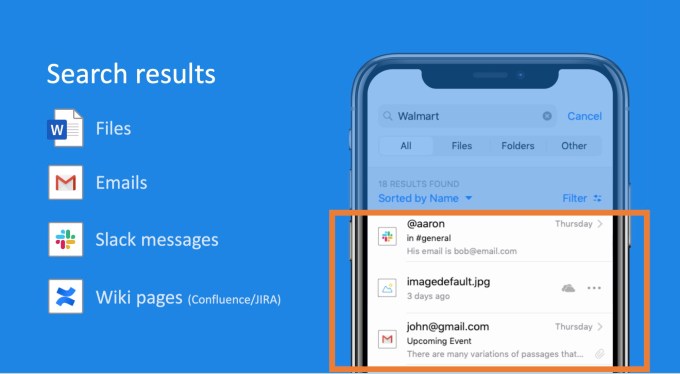 The AI component helps find files wherever they are based on your user history, who you tend to collaborate with and so forth. That helps the tool find the files that are most relevant to you, regardless of where they happen to be stored.

He says that raising money during a pandemic was certainly interesting, but the company has seen an uptick in usage due to the general increase in SaaS usage during this time, and investors saw that too, he said.

The company launched in 2016 and currently has nine employees, but Ganek said there aren’t any plans to expand on that number at this time, or at least any number he was ready to discuss.