When you think about startup hubs, Tulsa, Oklahoma is probably not the first city that comes to mind.

A coalition of business, education, government and philanthropists are working to foster a startup ecosystem in a city that’s better known for its aerospace and energy companies. These community leaders recognized that raising the standard of living for a wide cross-section of citizens required a new generation of companies and jobs — which takes commitment from a broad set of interested parties.

In Tulsa, that effort began with George Kaiser Family Foundation (GKFF), a philanthropic organization, and ended with the creation of Tulsa Innovation Labs (TIL), a partnership between GKFF, Israeli cybersecurity venture capitalists Team8 and several area colleges and local government.

Home to several universities and a slew of cultural attractions, the city has a lot to offer. To sweeten the deal, GKFF spun up “Tulsa Remote,” an initiative that offers $10,000 to remote workers who will relocate and make the city their home base. The goal: draw in new, high-tech workers who will help build a more vibrant economy. 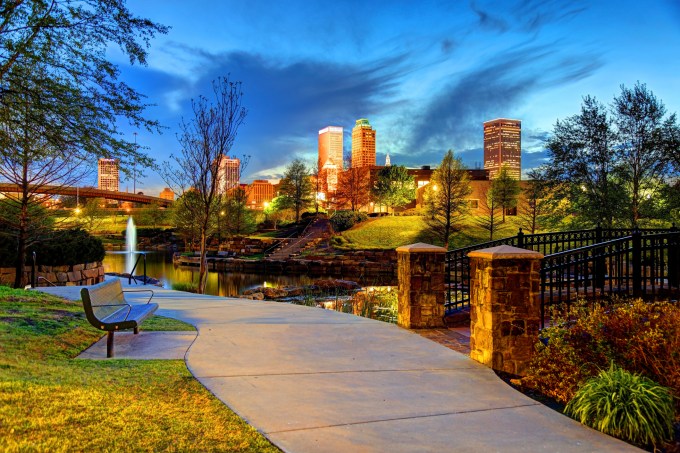 Tulsa is the second-largest city in the state of Oklahoma and 47th-most populous city in the United States. Photo Credit: DenisTangneyJr/Getty Images

Local colleges are educating the next generation of workers; Tulsa Innovation Labs is working with the University of Tulsa in partnership with Team8 through the university’s Cyber Fellows program. There are also ongoing discussions with Oklahoma State University-Tulsa and the University of Oklahoma-Tulsa about building a similar relationship.

These constituencies are trying to grow a startup ecosystem from the ground up. It takes a sense of cooperation and hard work and it will probably take some luck, but they are starting with $50 million, announced just this week from GKFF, for startup investments through TIL.