Hello and welcome back to TechCrunch’s China Roundup, a digest of recent events shaping the Chinese tech landscape and what those events mean to people in the rest of the world. This week, we are seeing the backlash Chinese tech companies face around the world as anti-China sentiment escalates. In China, one of the world’s largest trade fairs kicked off, virtually.

Chinese apps are facing major challenges in India after an app named Remove China Apps that made it easy for users to delete China-related services went viral. Though Google has pulled the app, anti-China sentiment will likely haunt Chinese apps in India as political tensions between the countries heighten. Several Indian celebrities in recent days have supported deleting Chinese apps. Yoga guru Baba Ramdev tweeted a video over the weekend that showed him deleting several apps with an affiliation with China.

Decoupling from Chinese tech might not be easy in practice. Four out of the top five smartphone brands in India are Chinese, according to Counterpoint data, three of which belong to the enigmatic BBK Electronics group based in Shenzhen. These Android phones normally come bundled with a suite of Chinese utility apps, so users would have to find alternatives were they to abandon the Chinese options. 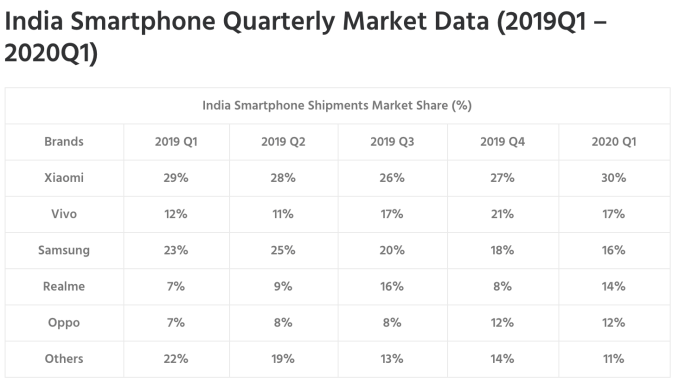 The coronavirus outbreak is prompting people to bring everything online — including mega-size trade shows. This week, Tencent announced that it will provide technological infrastructure to digitize China’s oldest and biggest trade fair Canto Fair, which was postponed due to the coronavirus and later rescheduled to run virtually from June 15 to 24.

The social networking and gaming giant, which has a growing cloud unit, will deploy more than 1,300 acceleration nodes across some 30 countries to handle the traffic of several hundred thousand exhibitors and buyers (1,100 of these acceleration nodes will be in China).

The virtual system will support essential trade show functionalities such as matchmaking between exhibitors and buyers, product demonstrations through videos and interactive live streaming.

The project will also acquire users for Tencent’s enterprise-facing services, which have become the giant’s new growth focus. For instance, Tencent Meeting, a Zoom equivalent, can host up to 300 participants per session. The app is currently the most downloaded iOS “business” app in China, according to App Annie.

Jushuitan, a six-year-old Shanghai-based startup focused on ERP (enterprise resources planning) tailored to e-commerce, announced completing a $100 million Series C round led by Goldman Sachs. While China’s consumer-facing internet companies are in many ways on par with their American counterparts, the country is still “5-10 years behind in the area of enterprise software,” stated Sun Mengxi, managing director at Goldman Sachs.

The firm’s software-as-a-service solutions have served more than 500,000 e-commerce clients in China, but it’s looking for overseas expansion — which will use some of the proceeds from this round of funding. The fresh capital will also help upgrade the Jushuitan’s products and services, work on its integration into supply chains, as well as allow it to invest in or acquire other companies.

Jushuitan is betting on the need for digitization in China’s massive online retail industry, which has seen exponential growth since the early 2010s. Chief executive and founder Luo Haidong contended in a previous interview that the “watershed” in Chinese e-commerce happened around 2013-2014.

“When e-commerce first emerged, stores were able to sell all their inventory as long as they managed their orders well. But as the number of stores increased and growth slowed after 2014, there was a greater need to improve management. I clearly felt that the market was calling for an integrated system to manage orders, warehouses and supply chains — that gave Jushuitan a great opportunity.”