Another troubling report for the smartphone industry this week. This time the numbers come from IDC, which puts shipments at an 11.9% year-over-year decline for 2020. The number reflects a steep drop off in Q1, followed by what what will likely be continued struggles for companies to regain footing.

In fact, the report goes on to note that the first quarter’s figures represent the sharpest y-o-y drop in the history of its reporting. That’s bad enough news, right? Well, things aren’t getting too much better for smartphone makers any time soon. The whole of H1 is on track for an 18.2% decline.

The slowed recovered comes courtesy of all of the factors we’ve come to expect at this point in the global pandemic. Supply chain issues have given away to demand problems, as recession has gripped the global economy. Here in the States, some 40 million people have applied for unemployment since the beginning of the crisis. It’s an understatement to say people simply don’t have the expendable income to spend $500-$1,000+ plus on an unnecessary upgrade. 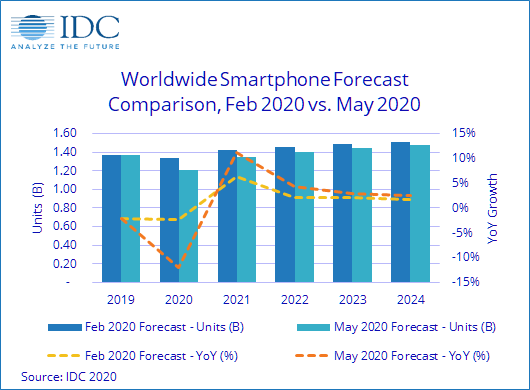 The widespread 5G adoption analysts were expecting would pull the industry out of the doldrums has likely been delayed until 2021. Likely the pandemic will also result in the lowering of 5G handset prices occurring much earlier than they would have otherwise. Meantime, a surprisingly robust market for remote working products like PCs will also continue to have an impact on consumer spending with regards to smartphones.

“There’s no question that challenges lie ahead for the smartphone industry and we believe the economic downturn is going to cause some fluctuation in the vendor and price-tier landscape,” IDC’s Ryan Reith says in a statement. “The surge in consumer spending around devices that are less mobile than smartphones (PCs, monitors, video game consoles, etc.) will undoubtedly take a share of the consumer wallet that would have been put towards smartphone upgrades and 5G.”