The acute pain of California’s housing crisis can be measured in the human toll it takes on the increasing numbers of families made homeless by rising rents and the billions of dollars the state loses to the high cost of living.

After wrestling with recalcitrant homeowners, husbanding their parcels of land to keep their property values high, the state’s leadership passed a law that increased the availability of new rental units and put more money into homeowners’ pockets in 2016. The passage of the law has unlocked a wave of entrepreneurial energy as startups look to build things that can make money and solve a real problem for the state — and eventually — the nation.

These are companies like the recent Y Combinator graduates Homestead and Rent the Backyard and United Dwelling, which has just raised $10 million in funding from investors including Lightspeed Venture Partners and Alpha Edison.

These companies aren’t building new gaming platforms or cryptocurrency applications, but instead are trying to find ways to bring low-cost housing at an affordable price to homeowners who could use the additional income and renters who are spending increasingly more money for increasingly smaller spaces — if they can afford those homes at all.

“What was important to me was creating affordable housing,” said United Dwelling founder and chief executive Steven Dietz. A former venture capitalist and the co-founder of the firm that would become Los Angeles’ largest, Upfront Ventures, Dietz decided to start his company as a response to what he sees as the largest problem that California faces.

The problem with other companies building pre-fabricated or modular homes for what are called accessory dwelling units on California properties is that they’re not being built for middle-class homeowners.

“Homeowners have this valuable property which is a detached two-car garage,” said Dietz. “We go to the homeowner and say you have this property here. You can put in a small home and rent it out and it will be a source of income to you.” 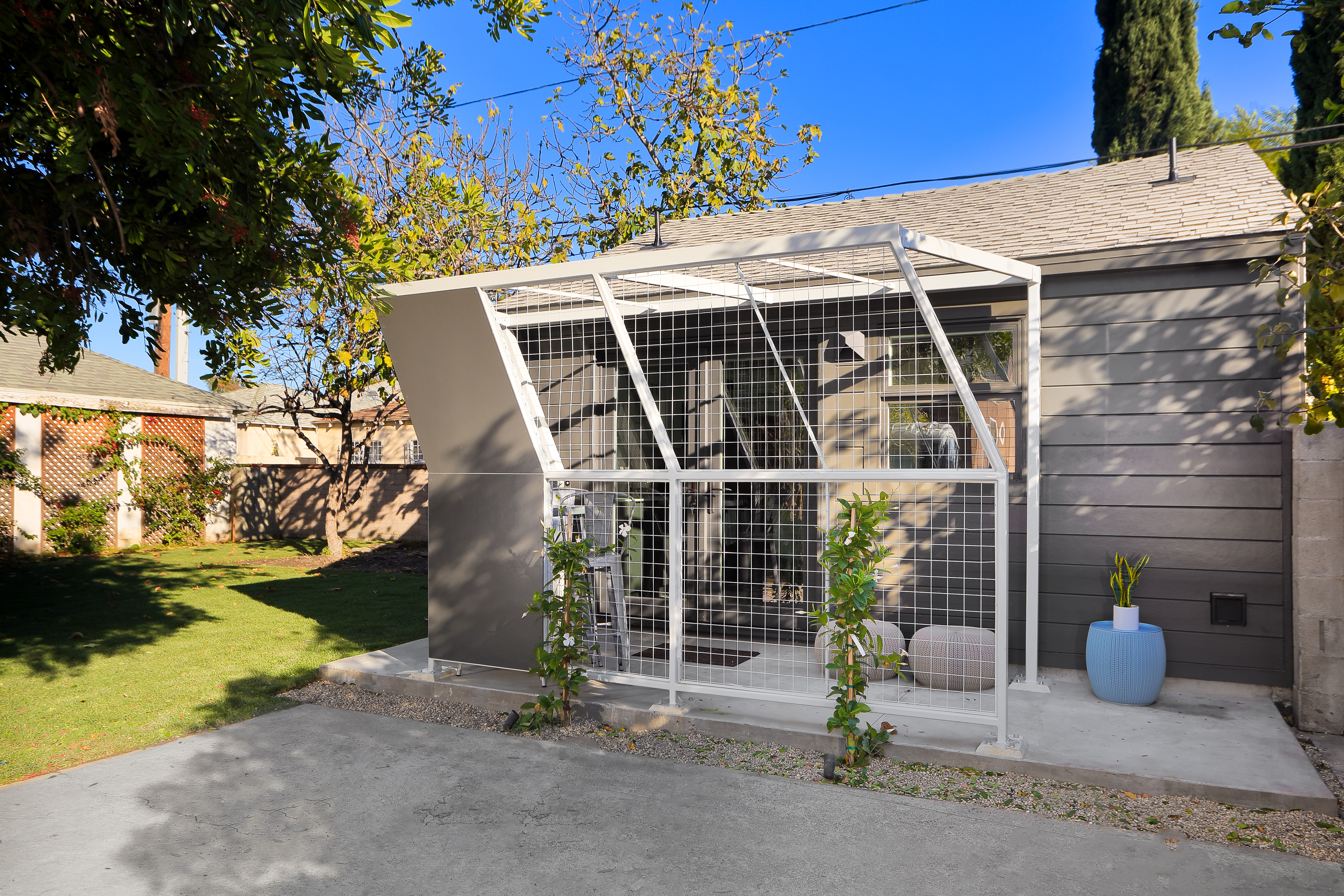 Homeowners can either lease the studio home to United Dwelling and receive a few hundred dollars a month for the property, or buy out the company for $87,900 and have United Dwelling manage the property. The Culver City, Calif.-based company makes money on the sale of the house, managing the rental and connecting homeowners to a lender that will give them money to acquire the rental property.

That bid was enough to convince Davita and Martin Macauley, a couple who own a home in Los Angeles’ Gramercy Park neighborhood and are two of United Dwelling’s first customers. “Garage conversions were a new concept for us,” Martin McCauley told Curbed Los Angeles. “But it made sense when you think about the amount of people who have garages, and if we got all of that junk out of our garage, we’d actually have about five things we actually need.”

There are over 831,000 homes in Los Angeles that meet the criteria for United Dwelling’s construction, which amounts to a 20 foot by 24 foot space.

“The original plan was to remodel existing garage,” Dietz said, “but after we did two of them and put a bunch more through the permitting process we realized remodeling a 70 year old structure built as a garage and turning it into a home was not scalable.”

Instead, Dietz and the architecture firm Modative collaborated on a new design for a pre-fabricated house. The United Dwelling houses are equipped with the latest appliances and their insulation and electrical ranges, washers, and dryers mean that the apartments have net zero energy consumption and a net zero carbon footprint, according to Dietz.

Modative isn’t the only partner from the Los Angeles community that United Dwelling has brought on board. The company uses a local nonprofit organization called Chrysalis to build its units. The nonprofit is designed to help low-income individuals find employment and get on the path to economic self-sufficiency, according to the company. 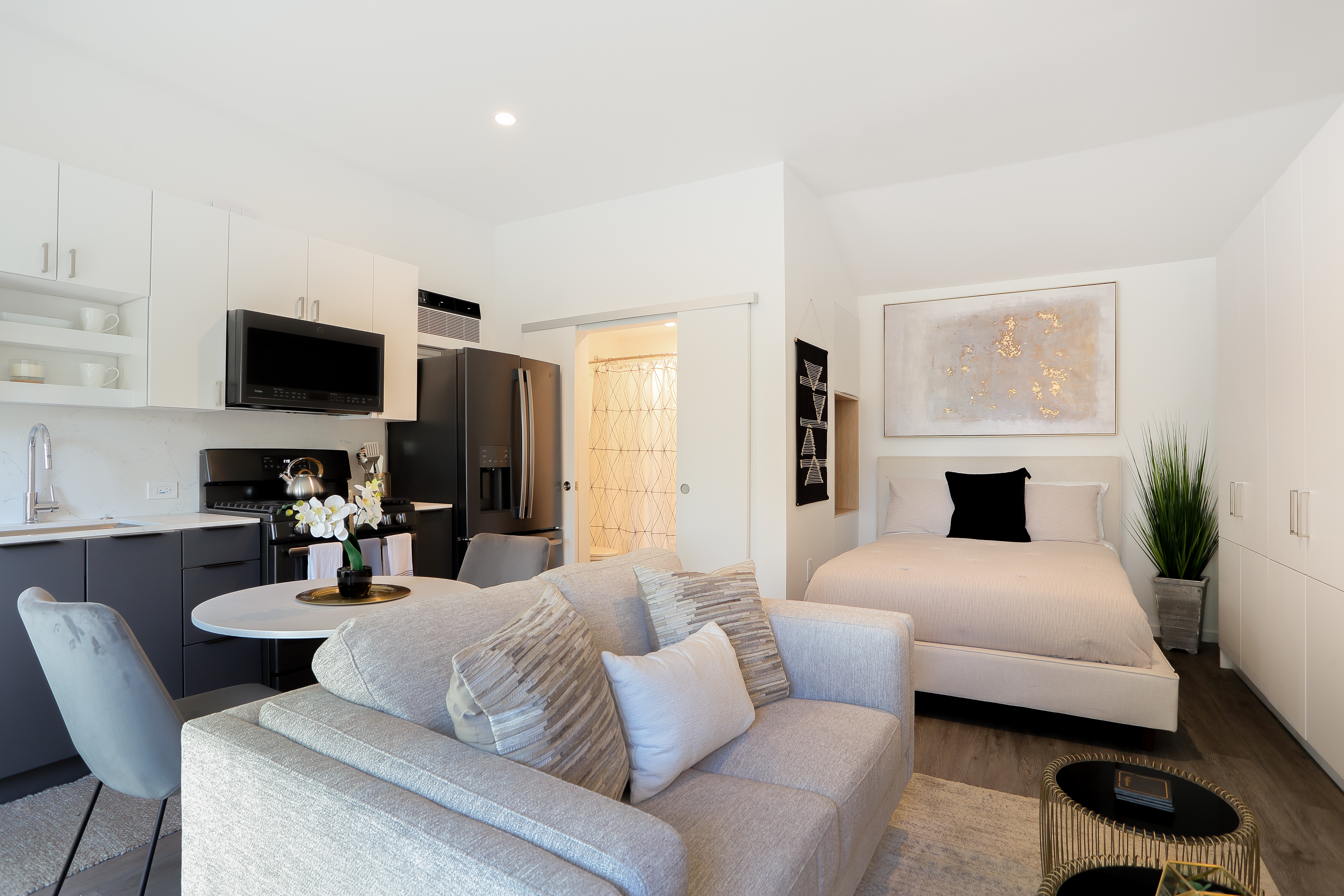 According to an October article in The New York Times, the rent for one of United Dwelling’s detached studio apartments around the University of Southern California’s campus would cost roughly $1400 per month. The prices will vary by neighborhood, but Dietz expects them to run 20 percent less than the average cost of an apartment in the same neighborhood, he said.

Since that article’s publication, the timing for Dietz’s planned roll out of several hundred homes stalled and the investor turned entrepreneur, who had previously financed the company himself, went out to raise cash from venture investors.

The term sheets for the round came in at the end of February, and then the pandemic hit. Rather than wait for his investors to call him, Dietz approached Lightspeed and Alpha Edison, which led the round, about changing the terms of the deal. “[I] changed the price by 11 percent and walked that through and continued to move forward,” Dietz said.

There are currently five homeowners who have agreed to be guinea pigs for the United Dwelling experiment in urban reconfiguration, but Dietz said that the company would have 150 buildings under management by the end of the year, and 1700 by the end of 2021.

For Nick Grouf, the founder of Alpha Edison, it was both Dietz’s experience as an investor and the company’s vision for the future that compelled the firm to commit capital.

“We’ve been spending a lot of time thinking about fundamental social challenges,” said Grouf. “And an area that has been causing an incredible amount of pain is affordable housing. [And] one of the areas where we have been spending a lot of time is trying to find a business that we felt had real scalability and that really represented innovation and where we had confidence that there would be durable growth.”

One of the lynchpins that sealed the deal was the as-yet-undisclosed partnership with a lender who could help move the needle on getting homeowners to build. “This is not an inexpensive decision although it is an economically compelling decision,” said Grouf. “From a cash flow perspective, it is not only creating a more valuable asset for the homeowner and creating revenue streams that they have historically not had… there is this latent supply of outbuildings that can be converted into usable housing. When you can match that latent supply with latent demand. Where people would love to live in some of these neighborhoods.. What Steven has done in unlock that supply and demand in a way that’s economically compelling.”