Tesla has not been given the “green light” to open its factory in Fremont, Calif., Alameda County Health Officer Dr. Erica Pan said in a videostreamed town hall meeting Friday.

Tesla made plans to open as early as Friday in defiance of the county’s extended stay-at-home order.

Tesla said in an internal email sent to employees Thursday, which TechCrunch has viewed, that it was planning to restart “limited operations” at the Fremont factory, which is located in Alameda County. Tesla’s decision is in direct conflict with a stay-at-home order in Alameda County.

Alameda health and county officials are working with Tesla and have reviewed their safety plans for reopening, Pan said. “We’ve asked them to wait,” she added.

Tesla did not respond to a request for comment.

Employees received two emails — one from CEO Elon Musk and another from Valerie Workman, the company’s human resources director — indicating that the factory would open as early as Friday. The decision to open was based on new guidance from Gov. Gavin Newsom, who said Thursday that manufacturers could resume operations. However, Newsom’s guidance included a warning that local governments could keep more restrictive rules in place.

Alameda County, along with several other Bay Area counties and cities, issued revised stay-at-home orders that will last through the end of May. Those revised orders did ease some of the restrictions. However, it did not lift the order for manufacturing.

Below is a screenshot of an email sent to TechCrunch from a Tesla employee. 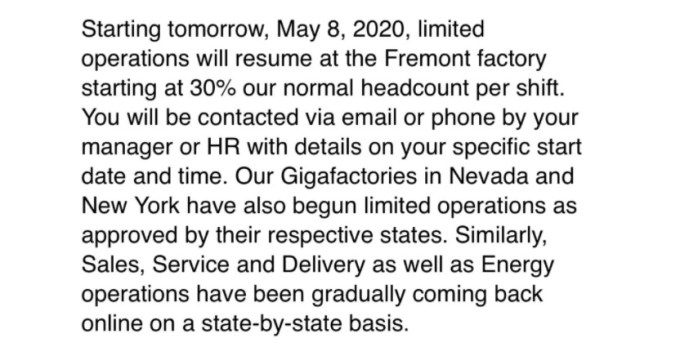 Pan and health officials from the other Bay Area counties want companies like Tesla to wait until they can be sure there isn’t an impact from the loosening restrictions. They also want to make sure that businesses have proper time to plan their reopening to ensure they’re following best practices.

“We are really asking our facilities within the county that our local health order still prevails and to wait until we have another week or so under our belt to see what has happened after we did that first round of lifting restrictions,” Pan said.

The Alameda County Health Department told TechCrunch that it has informed Tesla of “all of the conditions that must exist for phasing in the safe reopening of various sectors of the economy and the community.”

If a business does not meet the limited criteria described in the county’s order, it cannot reopen.

“Tesla has been informed that they do not meet those criteria and must not reopen,” a spokesperson for the county health department said in an email. “We welcome Tesla’s proactive work on a reopening plan so that once they fit the criteria to reopen, they can do so in a way that protects their employees and the community at large.”