Savings and investing apps are having a moment. While many startups are struggling in the wake of COVID-19 and its economic impacts, services that help regular folks save a bit more or invest their funds are seeing a demand boom.

Coming into 2020 on the back of a huge fundraising year for the fintech cohort, it’s a welcome result for investors and founders alike

Public, a startup whose app allows consumers to invest for free, is enjoying the updraft. So much so that it accelerated a feature release to help capitalize on changing consumer behavior. This morning let’s explore how quickly Public has grown in recent weeks, and why it’s doubling-down on the social side of its service, something that many of its peers lack.

But Public’s service is a different from other investing apps that you might be familiar with. Users can buy fractional shares, invest in ETFs, and invest in themes for free, as you’d expect in 2020. But it also has a social element that makes its application more than just a place to take stock of your portfolio’s performance.

Users can display their investments and stocks that they are interested in on a public page (here’s one). They can also explain their investment choices in a public feed (the company’s name is rather on-the-nose).

Those social tools became more than a neat feature when the markets began to gyrate earlier this year. According to Malling, users were coming to app to handle the market’s ups-and-downs alongside their investing peers. Public’s users “are going through [the turbulence] together,” Malling told TechCrunch, adding that he and his company believes that investing through a downturn with fellow investors is a “a much better way” than hacking it alone.

But Public wanted to provide more social tools to its users, and quickly, once the markets stopped merely going up and began to bounce up and down instead. So the startup accelerated the rollout of private and group messaging, which it launched this morning.

Public had messaging capabilities on the roadmap before COVID-19, but the changing world “made the need so much more apparent,” Malling said. “Times of great uncertainty [are] really when you do need community,” the co-CEO explained in an interview. “You need people that you can have dialogue with.” 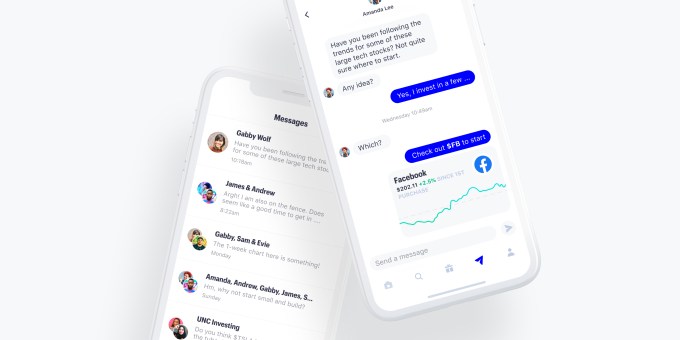 Screenshots of Public’s new messaging tool, via the company.

Community in trying times is welcome, and public-market investors are a famously chatty bunch, so messaging might prove to be a smart call for Public. From day trading chat rooms in the 1990s to today’s WallStreetBet denizens, folks putting money to work like to talk about where they are deploying capital and why. Public is not designed for day traders, mind, but that doesn’t mean its longer-term investing users won’t want to talk amongst themselves.

And there are more Public users than ever. Like its competitors (Robinhood, Wealthfront, M1 Finance, Betterment, it’s a list) Public has seen its userbase boom in recent weeks. According to the company, it saw “new customer growth” of +80% in April when compared to March’s results, along with a doubling (+100%) of trading activity and a tripling (+200%) of time spent in its app by users.

That recent growth has been organic, according to Malling. Noting that he views Public as a social network, Malling said that his company “predominantly” grows via organic channels, including user referrals, because it is an “app that gets better with friends on it.”

Looking ahead, TechCrunch asked the company if messaging would be followed up by other, socially focused features in the future. It will, according to Malling, who told TechCrunch the new messaging feature will be prominently featured in the app itself, which he felt was “indicative that [the new feature] is the start of something, and there will be many more exciting updates that we will roll out in the coming months.”

The social aspirations of Public are serious. Malling explained TechCrunch that folks today have Slack for work, for example, and Twitch and Discord for for gaming, but that “there isn’t really that social network for investing and that is ultimately what we think we can build with Public.”