JioMart, an e-commerce venture run by India’s most valued firm, is testing an “ordering system” on WhatsApp, teasing the first peek at the collaboration between Facebook and Indian telecom giant Reliance Jio Platforms.

They can initiate an order by texting “Hi” to +91-8850008000, which prompts a link that opens a mini store on the browser, allowing them to pick a range of grocery products including toothpaste, snacks, tea and coffee, rice, and cooking oil.

Once an order has been placed, which currently does not include a way to pay digitally, JioMart automatically assigns a neighborhood store to them and sends an invoice through WhatsApp.

More than 1,200 neighborhood stores are engaging in the pilot program. A Jio spokesperson declined to comment. 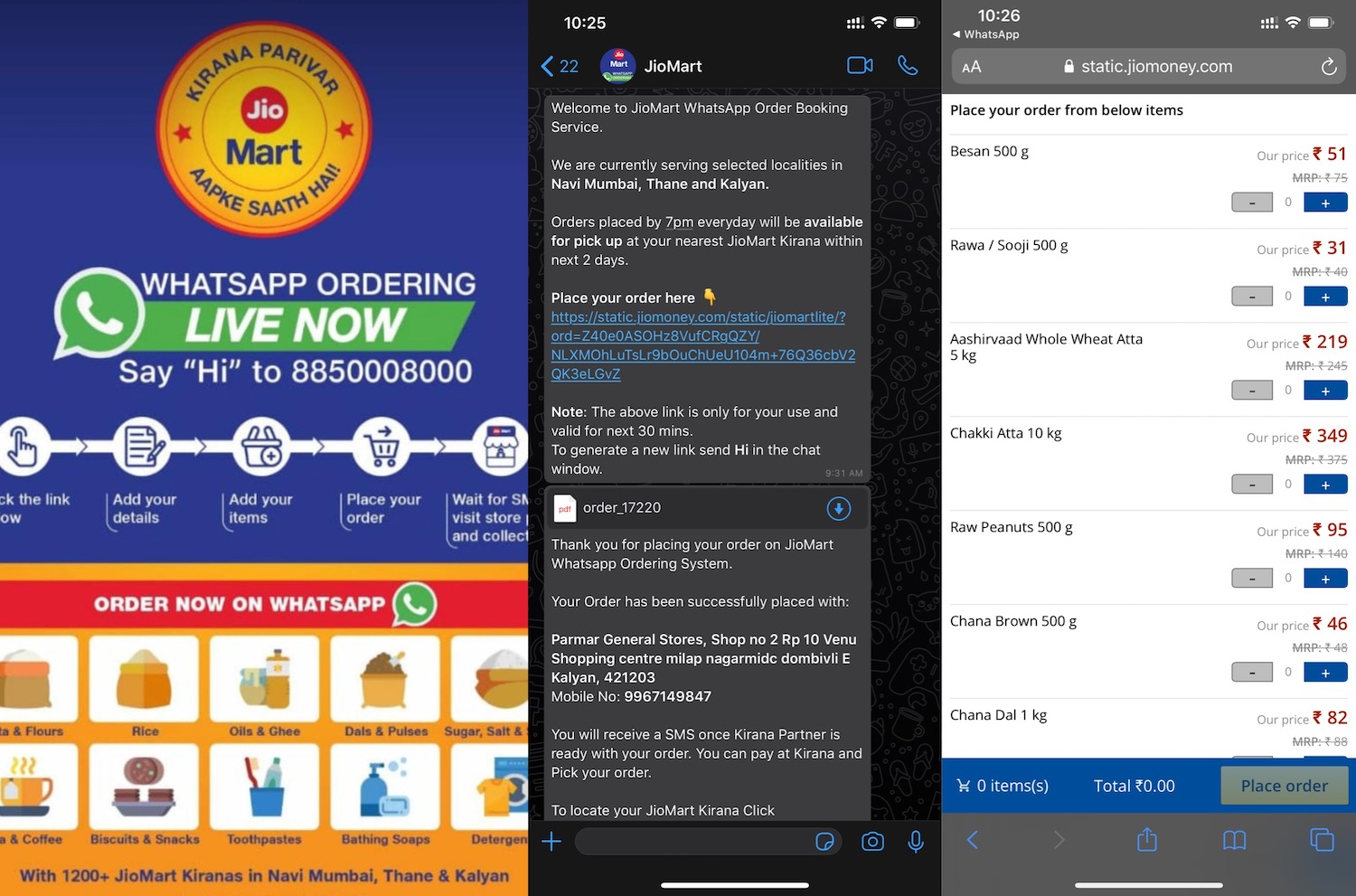 JioMart, a joint venture between Reliance Retail, India’s largest retail chain, and Reliance Jio Platform, the biggest telecom network in India with over 385 million subscribers, is ensuring “hygiene and safety of staff,” “fair prices”, round-the-clock operational warehouses, and “daily supplies to the store.”

The testing gives us an early peek at how Reliance Jio Platforms wants to leverage WhatsApp’s unparalleled reach in India, where the Facebook-owned service has amassed over 400 million users.

Last week, Facebook announced it was investing $5.7 billion in Reliance Jio Platforms to secure a 9.9% stake of the Indian firm, which like Reliance Retail, is a subsidiary of Reliance Industries, the most valued firm in India.

Ajit Mohan, a Facebook VP who oversees the company’s business in India, told TechCrunch in an interview that the two companies will explore ways to collaborate.

One of those collaborations may allow users to find local stores around them on WhatsApp, talk to store operators and place orders from within the Facebook-owned instant messaging service, he said last week.

“You can browse shops and talk to the shop owner. And ultimately, where we do want to take this flow is for you to be able to place your orders,” he said, adding that there is a possibility that users might not be required to pay through WhatsApp, which started to test its payments service in India two years ago.

WhatsApp has yet to receive approval from New Delhi for a nationwide rollout of Pay in India. Local media reports claimed earlier this year that WhatsApp had started to expand Pay’s reach in the country in various phases. Facebook’s Mohan said last week that only 1 million WhatsApp users in India, same as before, have access to its mobile payment service.