That’s what happened to Bubba Wallace on April 5 when he rage-quit a race in the eNASCAR iRacing Pro Invitational — a substitute for the series’ rubber-to-pavement action during the COVID-19 pandemic.

As live audience sports organizations have paused playoffs and closed stadiums, NASCAR has found traction in an esports alternative to keep racing and sponsorships going through the coronavirus crisis.

That’s what created the scenario for the latest driver/sponsor fracas. After a bump by Clint Bowyer spun Wallace out in Sunday’s virtual Bristol Motor Speedway contest, Wallace bailed with an expletive and a yell from his ‘net-connected simulator.

The gaming world has a term for abruptly exiting a competition — rage quitting — and one of Wallace’s backers was none too thrilled about him doing it. Blue EMU, a joint muscle-cream product, pulled their sponsorship of the driver.

The incident marks a first for a NASCAR driver to lose a sponsorship for conduct in e-competition, according to a NASCAR spokesperson. But the affair is a sub-plot in a bigger story — how NASCAR has transitioned its fan and advertiser base rapidly to another format during a national health pandemic.

The auto racing series — which is America’s most popular motorsport — has turned to tech to continue competition and audience engagement through the COVID-19 lockdown. When the coronavirus crisis restricted NASCAR’s ability to race, the fast-moving sport shifted to an esports alternative in short order.

The series postponed its regular schedule on March 16 and the next day NASCAR and iRacing announced the formation of the eNASCAR iRacing Pro Invitational Series.

This was accelerated by the two parties’ working relationship — iRacing is a Massachusetts-based online racing simulator company that has partnered with NASCAR on the eNASCAR Coca-Cola iRacing Series, a global gaming contest. 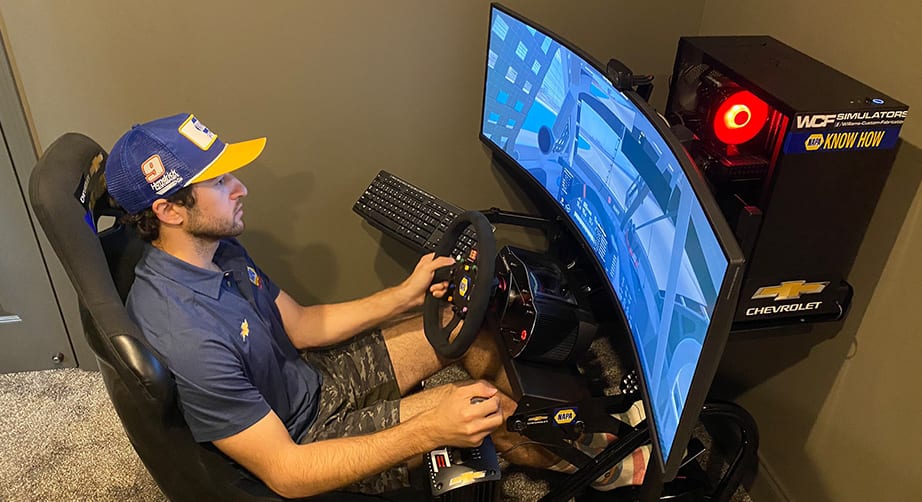 The two transferred much of that format — including the iRacing’s sim rigs — to connect NASCAR’s drivers to the new format.

“We ended up taking an entire apparatus…an industry that was built to promote real cars [racing] in real circles and pretty quickly migrated that over to the virtual world,” NASCAR’s managing director for Gaming Scott Warfield told TechCrunch.

As a result, Fox Sports agreed to simulcast the series — on its broadcast network, Fox Sports iRacing and the FOX Sports app — for as along to the coronavirus keeps the drivers at home and off real tracks.

An integral part of NASCAR — sponsors that run ads and adorn logos on team cars — is riding along with the virtual shift, according Warfield.

“Where we’ve been able to pull through some of our official sponsors we’ve done that,” he said. Those include NASCAR’s four premier partners Coca-Cola, xFinity, Geico and Anheuser-Busch, according to Warfield.

He credits the ability to keep key backers on board to the ratings the virtual races have pulled on Fox Sports and the audience engagement they’ve gotten on NASCAR’s cord-cutter platforms.

NASCAR teams are seeing fewer sponsors in esports competition, but Warfield believes that could pick up as the ratings for the eNASCAR Pro Invitational iRacing Series continue to rise.

“When you start talking 1.3 million viewers. That’s a pretty important metric to be able to say [to sponsors] ‘hey, you could be on the side of Denny Hamlin’s car in the virtual world,’ ” Warfield said.

NASCAR’s esports traction could become a case study for other live event sports that have shut down due to COVID-19.

Working with a tech partner — iRacing — the motosport series is continuing competition virtually through the health crisis.

And while Bubba Wallace may have lost a sponsor in this new esports arena, NASCAR has managed to carry over key backers in its digital conversion.