Chinese coffee chain super-brand Luckin Coffee has been in the spotlight the past week after the company revealed in an SEC filing that it has undertaken an internal investigation into an alleged $300 million fraud on the part of its former COO. That led the stock to drop nearly 80% on Thursday.

The bad news is continuing to multiply. The stock is down another 15% today as investors continue to comprehend the company’s disclosure and its positioning in the competitive Chinese coffee market, where the company displaced Starbucks as the retail and delivery leader in just a few short years. The company’s market cap is now just above $1 billion according to Yahoo Finance — a huge decline from its roughly $4 billion valuation immediately post-IPO.

That massive decline is putting massive pressure on banks that extended loans to buy the stock on margin. We learned this morning from Jing Yang at the Wall Street Journal that a structured loan to one of the company’s executives could lead to losses of upwards of $100 million:

On Monday, Goldman Sachs Group Inc. said a group of lenders is putting 76.3 million of Luckin’s American depositary shares up for sale, after an entity controlled by Luckin Chairman Charles Zhengyao Lu defaulted on the terms of a $518 million margin loan. Goldman is acting as a “disposal agent” for the lenders, meaning that it is helping to facilitate the sale in one or more transactions.

Yet, for all the bad news, there have been some silver linings.

Mobile intelligence service Apptopia, sent me this chart of downloads of the company’s iOS app, showing a huge bump in the wake of the alleged fraud news last week. 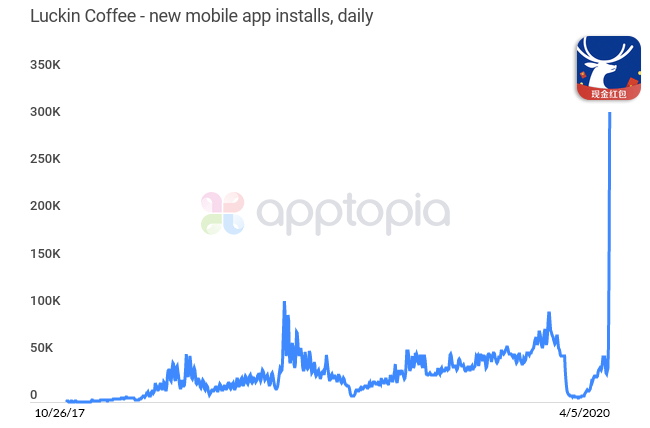 That massive splurge was driven by two competing forces, which together acts as a bit of a Rorschach test for China market observers. The more idealistic version had Chinese consumers rallying around the company as a form of Chinese nationalism against the American coffee chain Starbucks, in addition to supporting the company’s more accessible pricing. As Jiayun Feng at popular China news network SupChina reported:

On Chinese social media, most individuals — especially loyal customers of the coffee chain — were unfazed by the scandal, saying that they would appreciate every second of Luckin while it lasts. “As someone living on a limited budget, I don’t care about whether the company’s financial practices are illegal or not. I just don’t want to lose an affordable alternative to Starbucks,” a typical Weibo comment reads (in Chinese).

But the other more pecuniary force is that Luckin’s explosive growth the last few years was driven by heavy discounting and coupons along with pre-paid coffees — coffees that might be very hard to get if the company’s fraud is more expansive and it heads toward bankruptcy. Take these two example tweets:

Sent over from friends in China: People are rushing to Luckin Coffee to use their coupons. The app was down due to overloading. pic.twitter.com/7FtYxnoUjj

So that surge of downloads is a testament to the company’s support — and perhaps also a sign that few customers want to give up their freebies.

The bigger question as investors digest the news is how to process the sheer scale of the fraud for a stock that is listed on NASDAQ and follows American accounting rules as a publicly traded company. How could a stock that has been hugely popular among retail investors and day traders be built on such a base of sand? How could such a major fraud not be caught by auditors?