People seem to love the concept of the battle pass.

Largely popularized by Fortnite, battle passes reward players for playing well, and playing often. The better you do, the more XP you earn; the more XP you earn, the more stuff (new looks for your character, or victory dances to fire off at the end of a gunfight) you unlock. Willing to cough up a few bucks for an optional “premium” battle pass? That’ll open up a whole new set of rewards. The model has made its way into countless games over the last couple of years, from PUBG to Rocket League.

Zelos, an LA-based company out of Y Combinator’s Winter 2020 batch, is aiming to make that same concept work across multiple games. Tackle challenges in one game, earn rewards for another — or use your points to buy new games altogether.

Each day, Zelos offers up a handful of challenges across each of the games it supports, like dealing 10,000 damage in League of Legends or getting five kills with Wraith in Apex. Completing a challenge earns you “zips”; most challenges I’ve seen will earn the player somewhere between 15 and 150 zips, depending on how tough it is to pull off.

Once you’ve pooled up a pile of zips, they can be redeemed for all sorts of virtual goodies. The more something would cost otherwise, the more zips it’ll require. For example, 60,000 zips gets you a $5 Steam gift card — or 90,000 zips for $10 worth of Apex Coins. Once you get into the 50,000-200,000 zip range, you can redeem them for digital download codes for games like Rainbow Six Siege, Monster Hunter: World and Tabletop Simulator. Getting the good stuff can mean completing a lot of challenges, but remember: these are games people are playing anyway. 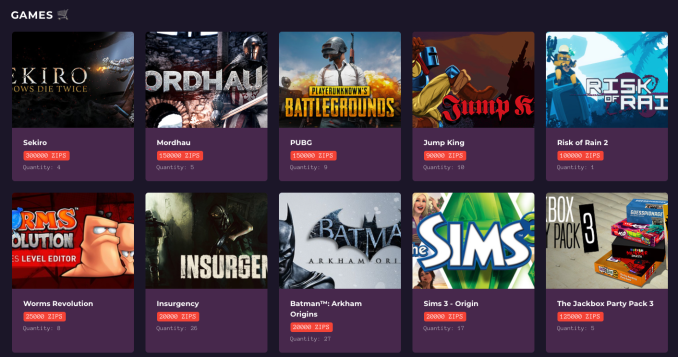 In addition to zips, each challenge earns the player a bit of EXP. EXP levels up your Zelos profile; with each level, you unlock a bundle of zips, additional challenges and items for your Zelos avatar.

Zelos is currently issuing challenges and tracking stats across seven games: Fortnite, Apex, League of Legends, Teamfight Tactics, DOTA 2, Counter Strike: GO and Clash Royale. Stat tracking works a bit better in some games than it does in others, depending on how open a game’s developers are with the data. With League of Legends, for example, they’re able to ping Riot Games’ dedicated API for a rich backlog of match data; with Apex, on the other hand, they’re limited to pulling stats based on a handful of unlockable trackers players can flip on between matches.

Zelos co-founder Jeffrey Tong tells me they’re focused on ensuring they stay above board with the data they pull, making sure they comply with each provider’s ToS. That makes sense, of course: Getting on a developer’s bad side could mean losing access to the data firehouse, in turn squashing Zelos’ ability to support a game. The more popular games Zelos can support, the better the whole idea works.

So if they’re giving stuff away based on challenges in games they themselves aren’t selling… how will they make money? The same way the aforementioned games do: a premium battle pass. Tong tells me that they’re currently testing a subscription-based battle pass that’ll unlock new challenges, award more prizes and increase the rate at which points are earned.

This isn’t Tong’s first foray into the gaming space; he previously built and sold OverStats, an analytics system for tracking a player’s esports stats over time. Co-founder Derek Chiang, meanwhile, was previously a senior software engineer at the decentralized computing company Dfinity.

Tong tells me they raised $2.8 million in the days after YC demo day, eyeing expansion of the platform, supported games and their team. The Zelos team is currently three people, with plans to hire another “six or seven” in the coming weeks. They’re currently seeing more than 50,000 weekly active users, with 55% of their users playing two or more games on the platform.