The massive surge of COVID-19-related layoffs has put tech in a unique position. While the startup world is facing layoffs itself, it is also trying to help get people back to work.

Back at the end of 2019, the SoftBank-backed belt-tightening period led to a flurry of crowdsourced spreadsheets with employee names from companies like Oyo, WeWork, Zume and more. The spreadsheets popped up as a bet on the network effect, with the ultimate goal of hoping the sheets land in the hands of a recruiter looking to hire one of hundreds laid off. Now, as COVID-19 cripples the economy, layoffs have surged dramatically past that one period.

On one end, we’ve reported on numbers of tech companies cutting staff, from Oyo, to ZipRecruiter, to TripActions. But on the other, brighter end, we’ve also seen the rise of platforms to connect those laid off and pledges from employers to not fire any employees during this trying time.

In a world where people are laid off on Zoom, tech’s efforts to give community, and a course of action, to those laid off is undeniably important.

So many start-ups have done or are planning layoffs that at this point it would be easier to list the ones that *haven't* cut staff.

So here are some places trying to help laid off employees:

The current climate of the pandemic, and the massive unemployment that has resulted, means that a spreadsheet with a long list of employee names and unverified contact information doesn’t cut it.

Shannon Anderson, the director of talent at Madrona Venture Group in Seattle, saw her firm’s portfolio companies struggling with layoffs and the changing economy. Two of the  portfolio companies, Textio and Rover, laid off staff, along with a number of other companies.

“We wanted to anticipate a reduction in force across the ecosystem,” said Anderson. “It’s a global problem.”

So, to help boost the network of those laid off, Anderson reached out to a number of HR leaders, including Chris Brownridge, the founder of Silver Lining, a job platform for those who have been laid off. He started Silver Lining after he shut down his startup last summer and had to lay off his staff of 20.

“I felt the pain [of layoffs] from the employer side, and it is painful for the employer, especially when you care about [your workers],” he said back in January. “I don’t want to keep seeing spreadsheets thrown around; I think that is not the right answer. We need a standardized way to deal with it, with a community behind it.”

Silver Lining is a platform that lets candidates submit profiles for recruiters from top companies to review. Job seekers on the site range from architects, UX designers, engineers, community managers and more. 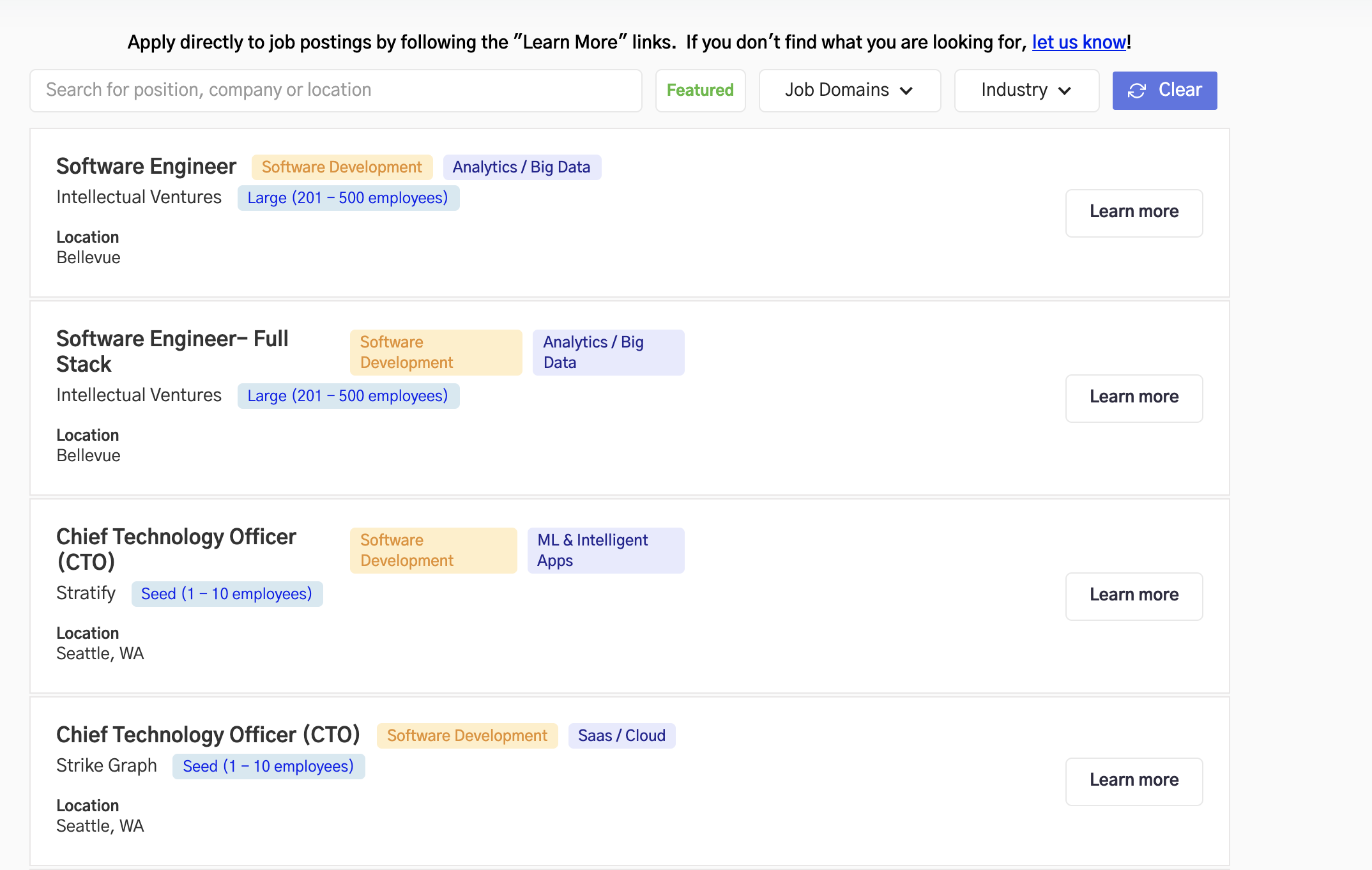 Then COVID-19 spread across the world, forcing people to stay home and spend less. The economy’s downturn unevenly impacted companies around the world: where layoffs exist for the travel sector, usage surges exist for the remote work companies. But as a whole, the labor force is struggling, with 6.6 million Americans filing for unemployment just last week alone.

Madrona said it is donating a portion of its budget to help Silver Lining offer more services to those laid off. The firm declined to share the total amount of the donation. 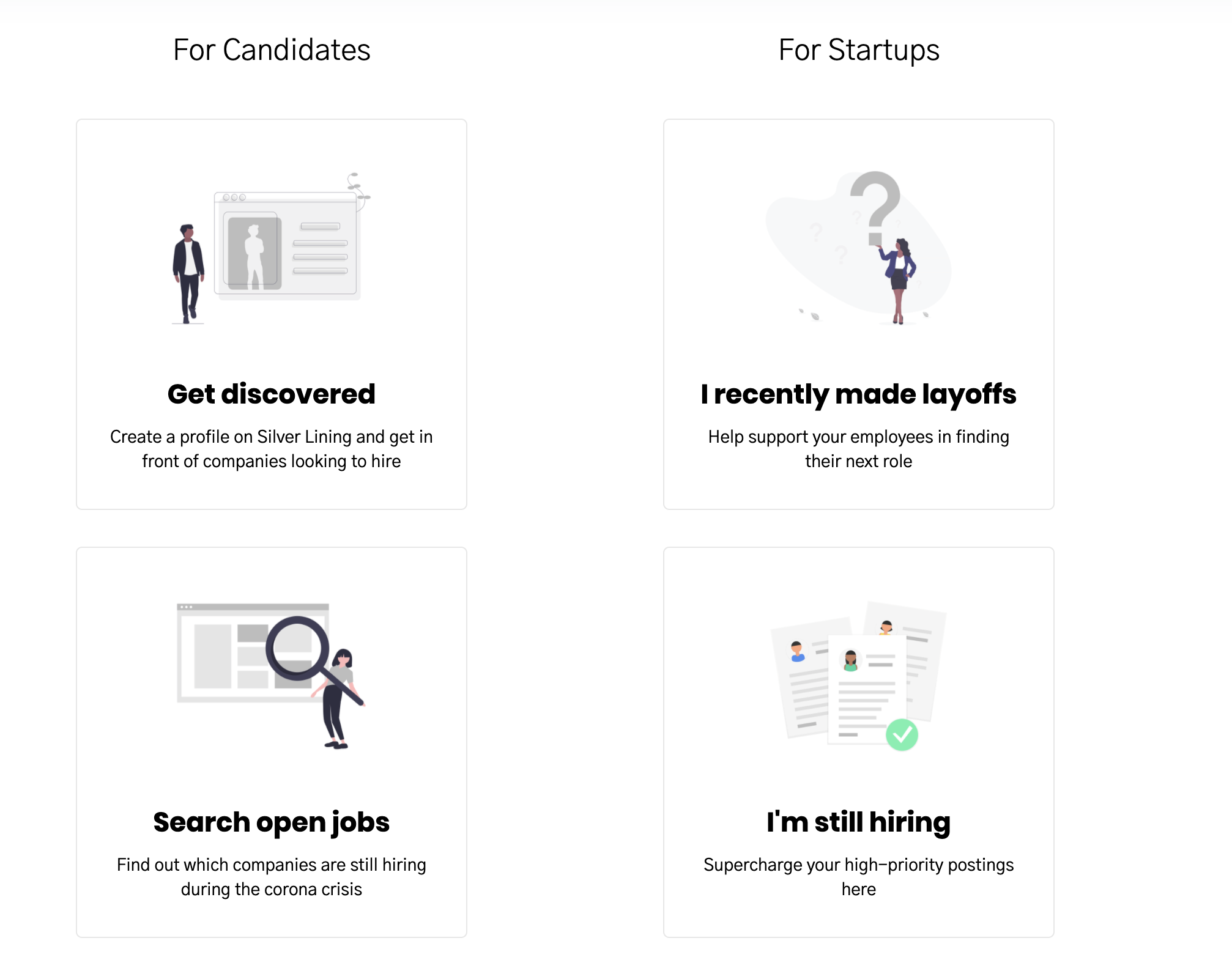 Silver Lining will also now offer coaching, resume writing and emotional support to folks on the platform, Brownridge says. Thanks to donations from Madrona, Skytap, Bandwidth, Voodle, Female Founders Alliance and more, the site is free to use.

The uptick in layoffs has led Boston-based Drafted, a referral startup, to launch a product called the Layoff Network to help those who have been laid off. The startup previously was sending out a newsletter, Layoff List, of weekly list of layoffs with spreadsheets hyperlinked. During the SoftBank layoffs, Olivia Clark, the creator of the newsletter, noticed a surge in traffic — more than 1,000 recruiters subscribed.

Now she says traffic is “up 2,000%” and, in just two weeks, Drafted’s engineering team has productized that newsletter into a job search network.

The Layoff Network connects with recruiters people who have been recommended by their colleagues and “endorsed” for their skills. If you’re laid off, you can sign up and create a profile and ask a previous employer or colleague to recommend you. Clark says this is similar to LinkedIn’s “endorse” feature to make sure the people are credible. 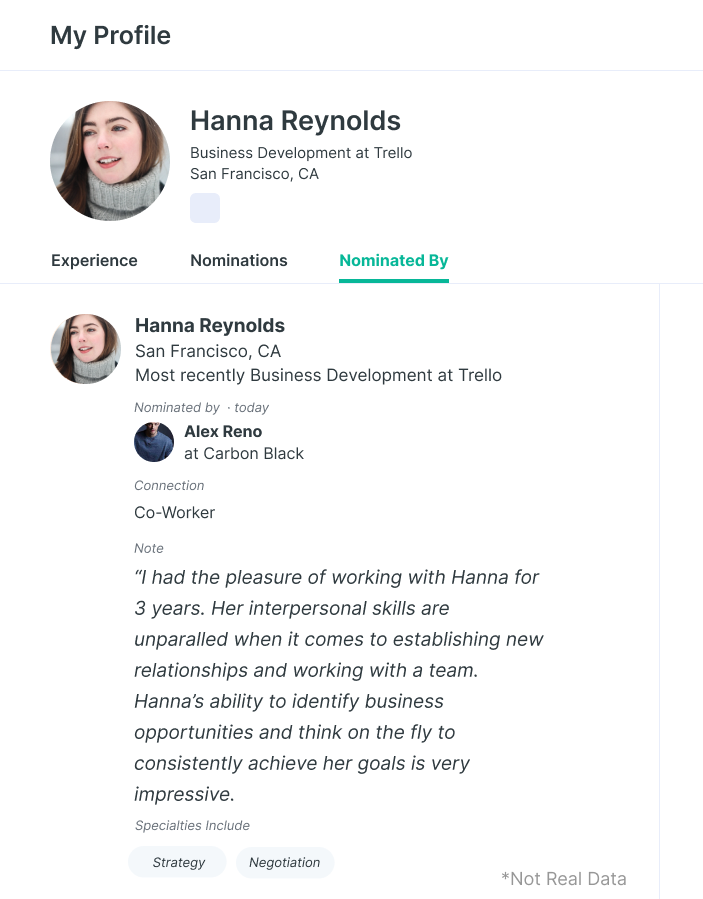 Once the person has been endorsed, they will be added to a talent feed. That is where recruiters can search for nominees, job titles, companies or locations. Unlike a spreadsheet, this is clearly easier to navigate and adds another layer of human touch. 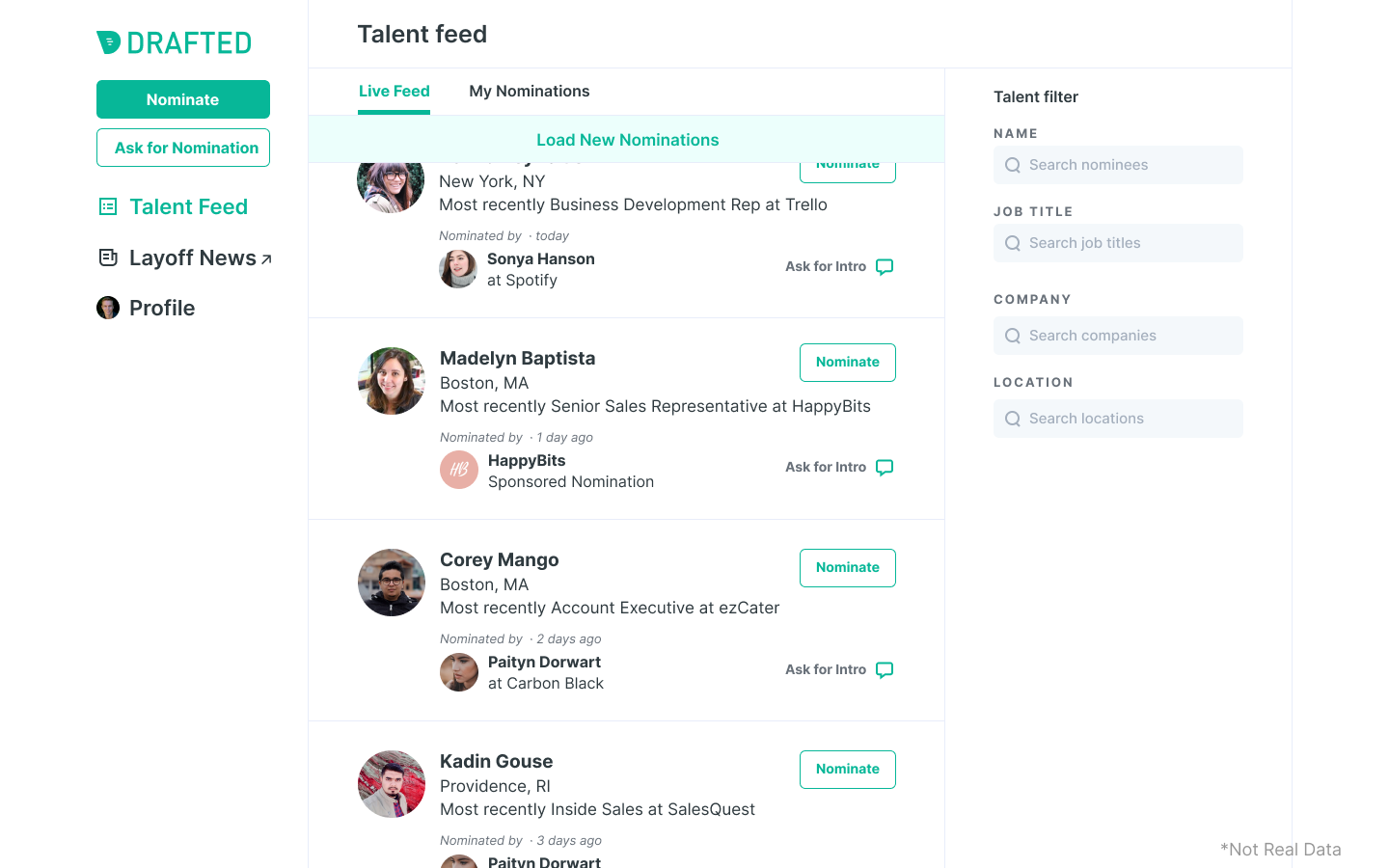 Clark says that the platform will be free for individuals who have been laid off, and who are recruiting or hiring. Drafted has a paid enterprise level that is for organizations that are conducting mass layoffs and want to provide support for former employees. 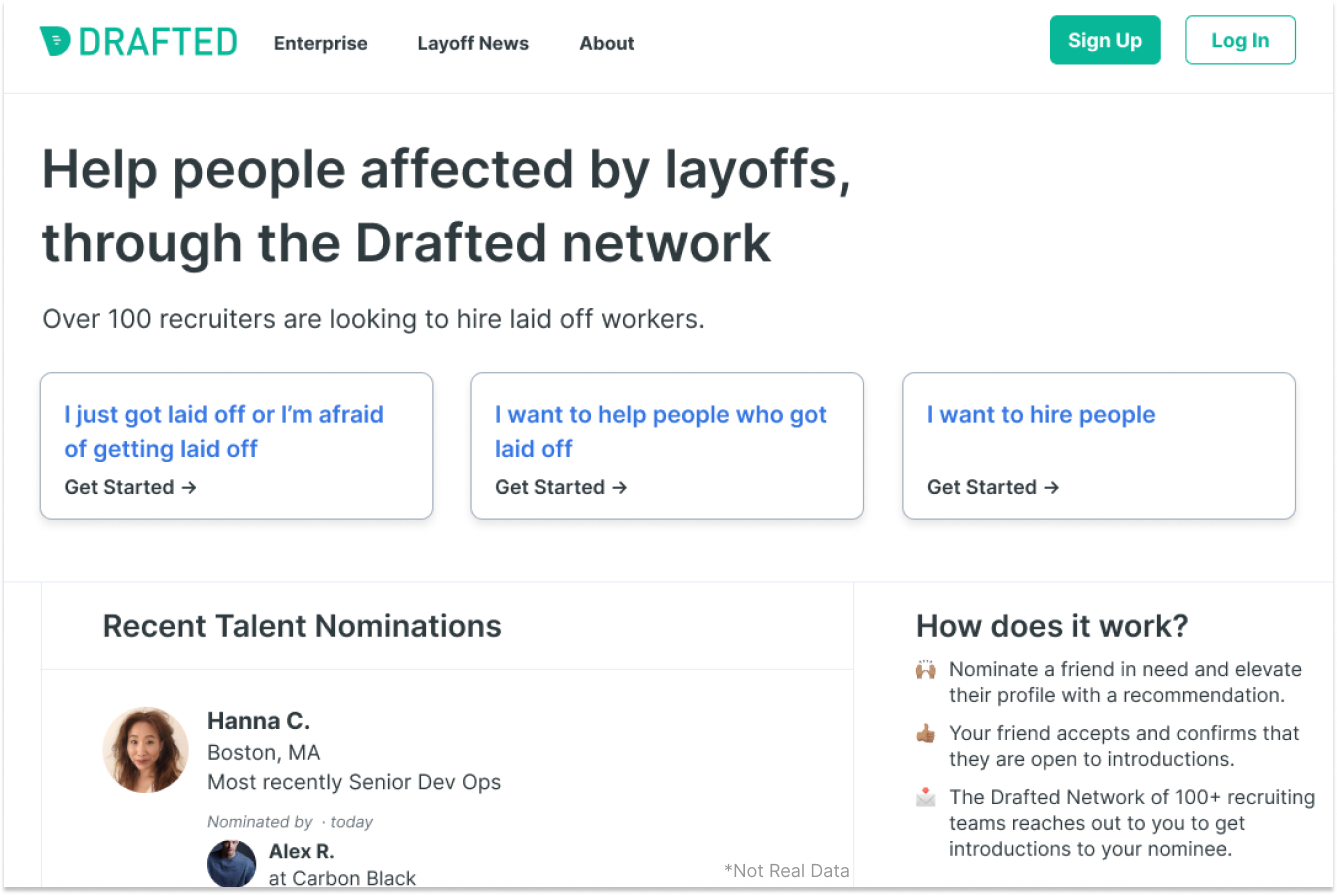 The grassroots efforts are vast and diverse. Here’s a list that posts companies that are actively hiring. Here’s a list for Canadian tech workers, and one for Colorado’s tech scene. And here’s a live tracker of startups that have issued layoffs, started by the team over at Human Interest, a startup that has nothing to do with layoffs.

Megan Murphy, who created Chicago Superstars for those laid off from the Chicago tech scene, has not received donations or support yet. As the number of unemployed people increases, Murphy says she’s noticing a lack of clarity on which companies are hiring, and which job postings are still active. If a company was hiring for a position in January, it might not be anymore (to help keep costs down).

“I can’t waste time crafting cover letters and custom resumes for jobs that won’t actually move forward,” she said. “There are tons of crowdsourced tools trying to flag who’s actually hiring still, while others are trying to flag who’s instituted a hiring freeze or laid people off, and in the meantime, company career pages aren’t up to date. We need one source of truth — and right now nobody’s really set up to do that.”

For now, Murphy says she’s getting creative in her own search, and asking for others to do the same. “Virtual communities and experiences are about to be more important than ever.” She notes guerrilla Slack channels and Reddit as an example of organic communication.

As for how she’s able to keep up with the demand of people needing help for their next job? Murphy, who is looking for a job herself after getting laid off, says she has fewer interviews from potential employers, so she’s been able to help those reaching out.

The work done by these entrepreneurs scratches at the same hope that lies within the hundreds of lines of contact information within a crowdsourced layoff spreadsheet: a need for a community in a trying time. And these days, more than most, remind us of the power of having a group of people together in the first place.