The Centers for Disease Control and Prevention (CDC) guidelines and the COVID-19 pandemic has surged event cancellations across the country. Tech workforces have found ways to stay productive: back-to-back Zoom calls, work-from-home happy hours and more Twitter threads than anyone asked for.

But Jason Craparo, the founder of events platform Hio, wants to put organic, face-to-face networking back on your calendar — in a socially distant, yet compliant, way.

Today, Hio launched a virtual lounge and a Network Now feature to replicate by-proximity networking. Using your iPhone, you can use Hio to see professionals nearby that are currently ready to, wait for it, hit it off. Then you can slide to their profile, ask if they want to do a 1:1 video chat and share information.

“Work from home doesn’t mean your results stop,” Craparo said. “People are being held accountable. We wanted to get this out so that the salespeople, entrepreneurs, small business owners and the like can basically get out to events virtually connected with people and meet their sales quotas and still do business.”

Network Now is a premium feature for which Hio usually charges $10 a month, but in light of all the canceled conferences, Craparo says it is free for the next three months.

How Hio wants you to network with other professionals nearby

The company also rolled out a virtual lounge. It’s similar to Network Now, except it is specific to events that have gone remote. Think a focused lounge produced by event organizers to help event participants meet each other. 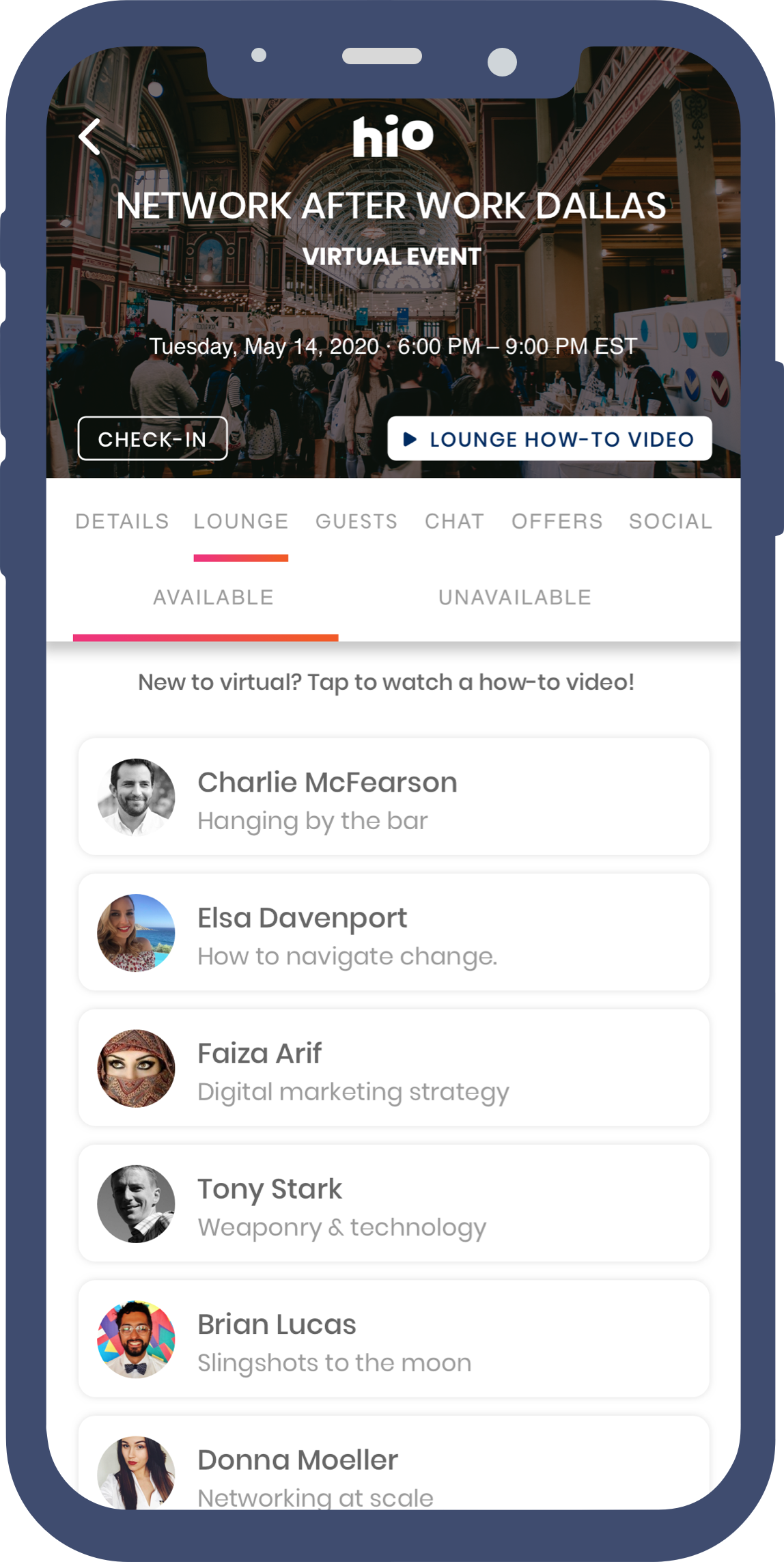 From diners and drive-ins to startupland

For Craparo, the intricacies of sales and small business ownership were a focus long before Hio.
The founder moved to San Diego to attend college, but he instead worked his way up to owner at Sonic Drive-Ins, a fast food chain. He then went to Juma Ventures, a company that employs inner city kids at concession stands at stadiums and did volunteer work across San Diego. He then earned his MBA from Babson, where he received a $275,000 check at a startup competition for his Hio prototype.

Hio initially launched as an app that allowed users to share their chosen social media handles with others. Today, it connects people to events and professionals nearby.

Users sign up and create a profile with their bio, interests and an elevator pitch in the form of a short video. The idea is that people can then attend a virtual event, and meet others through the app putting their profile foot forward. Beyond video chatting, users can send follow-up emails or direct messages. People also can set reminders to contact said individual once a week, month, quarter or never.

Craparo claims that Eventbrite isn’t a competitor, but instead a partner: Hio integrates with the ticket-selling and event registration company to provide independent organizers with a mobile app to go along with their events as an added networking tool.

Craparo also integrates with Meetup, which was acquired on Monday from WeWork by a group of investors, including AlleyCorp.

The novel coronavirus outbreak and health concerns have led to a rapid adoption of online-only groups. In fact, at the time of publication, Eventbrite’s front page touts online events.

Hio has the potential to serve Eventbrite and Meetup customers that are now in an online-only world and want an extra layer of communication between event participants. Of course, for now shelter in place and lockdowns are mandated by governments around the world. But, if Hio and other remote meetup services are seamless and friendly enough, virtual networking could stay part of our culture long after the pandemic is controlled.

Hio’s more direct competitors are services like Bumble for business, which is an offshoot of the popular dating app into a professional connection network. BumbleBizz lets you swipe through professionals near you. Hio wants to touch upon that same organic discovery process, but have control of more parts of the networking experience: from pre and post-communication to live networking opportunities and messaging.

Craparo says that dating isn’t a focus for Hio right now, but he noted that the lines between work and personal life feel blurry (especially these days). He won’t be surprised if some personal relationships develop.

Prior to this announcement, Hio already landed a few big clients, like New York Tech Meetup, a 200-person meetup that happens monthly.

Hio originally took seven months to hit 1,000 events. In the past three weeks alone, Hio has helped with 1,200 events. The rapid change illustrates that Hio is filling a gap for professionals that want to be connected during a time of isolation.