Cat Person is a new startup trying to change the way you think of cat people — and hoping to sell that new type of cat owner a whole range of cat products.

“We know what the stereotypes are, we just don’t think they’re true,” said CEO Jimmy Wu. “They’re incredibly outdated. We want to build a brand for who the modern cat persons are.”

When asked for more detail about these “modern cat persons” (not the kind dramatized by Kristen Roupenian’s famous short story), Wu said the company isn’t focusing on a specific demographic or geographic group — the words “hip,” “urban” and “millennial” were never uttered during our conversation.

Instead, he suggested that Cat Person recognizes that there are a wide variety of people who “genuinely care about cats.” He also suggested that their ranks could grow, given all the stress and anxiety around the COVID-19 pandemic.

“Obviously we’re in unprecedented times,” he said. “[But] this is a great time for this business. If anything, more than ever, people need cats. Cats provide relief.”

Wu co-founded the company with Lambert Wang, who previously worked in business development at razor startup Harry’s. In fact, Wang said he first took the idea to Harry’s co-founder Jeff Raider, and Cat Person is now spinning out as an independent startup from the company’s innovation group Harry’s Labs. 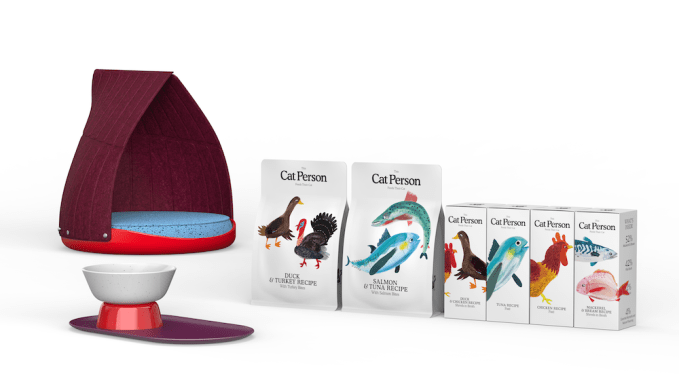 In Wu’s view, walking into a pet store today is like walking into “a dog store” with a single aisle reserved for cat products. Similarly, the pair suggested that when it comes to startups bringing the direct-to-consumer model to the pet world, most of the focus has been on dogs.

At the same time, Wu and Wang pointed to a survey of 1,000 U.S. cat owners that they commissioned from market research firm AYTM, which found that 71 percent of cat owners aren’t completely satisfied with the selection of cat furniture on the market, while 74 percent wish they had healthier food options.

Cat Person is supposed to deliver all of that, with an initial product lineup that includes high-protein cat food (wet food, dry food and treats), a modular cat bed ($80), a cat bowl ($40, designed to prevent whisker fatigue) and catnip toys ($7). Customers can also subscribe to a customizable recurring meal plan — Cat Person says that an average four-week shipment would cost $68.85.

The startup is launching at time of greater scrutiny and skepticism of the direct-to-consumer model, thanks to news like Outdoor Voices announcing layoffs and ousting its CEO and Casper revealing disappointing financials as part of its IPO.

It’s worth noting, however, that Harry’s exited successfully in a $1.37 billion acquisition by Edgewell Personal Care. (Update: Or it would have exited, except I totally forgot that the deal was blocked by the FTC.) Wu also suggested that even though Cat Person is starting out by selling directly to consumers via the Cat Person website, he isn’t wedded to a pure DTC model.

“We’re not building a direct-to-consumer company, we’re building a brand for cats and cat persons first and foremost,” he said. “I think DTC happens to be a channel through which we’re launching initially that allow us to build that direct relationship. But we want to be able to really quickly evolve.”