Who fact-checks the fact-checkers? Did Trump call coronavirus the Democrats’ “new hoax”?

Those are the big questions emerging from a controversial “false” label applied to Politico and NBC News stories by right-wing publisher The Daily Caller. Its Check Your Fact division is a Facebook fact-checking partner, giving it the power to flag links on the social network as false, demoting their ranking in the News Feed as well as the visibility of the entire outlet that posted it.

Critics railed against Facebook’s decision to admit The Daily Caller to the fact-checking program last April due to its history of publishing widely debunked articles. Now some believe their fears of politically biased fact-checks are coming true. 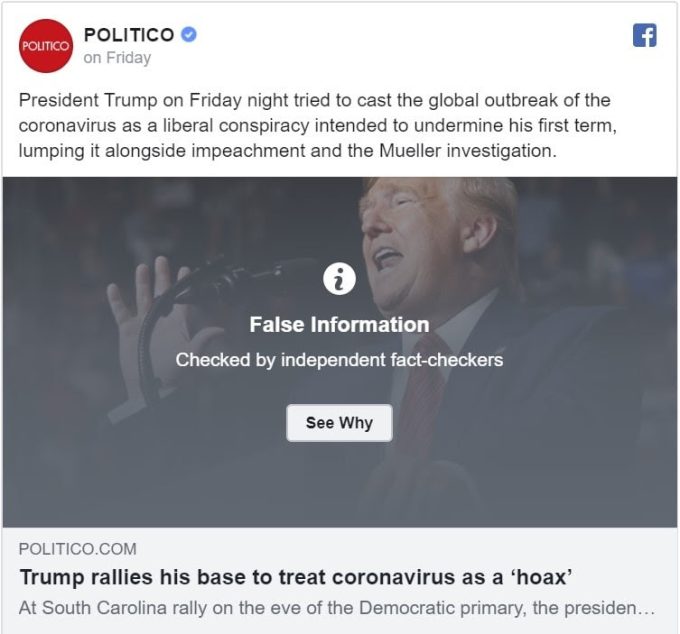 This week, Check Your Fact rated two stories as false. “Trump rallies his base to treat coronavirus as a ‘hoax’ ” from Politico, and “Trump calls coronavirus Democrats’ ‘new hoax’ ” from NBC News, as highlighted by Popular Information’s Judd Legum. The fact-check explanation states that “Trump actually described complaints about his handling of the virus threat as a ‘hoax’. ”

Trump had said at a rally (emphasis ours):

“Now the Democrats are politicizing the coronavirus. You know that, right? Coronavirus. They’re politicizing it. We did one of the great jobs . . . They tried the impeachment hoax. That was on a perfect conversation. They tried anything, they tried it over and over, they’ve been doing it since you got in. It’s all turning, they lost, it’s all turning. Think of it. Think of it. And this is their new hoax. But you know, we did something that’s been pretty amazing. We’re 15 people [cases of coronavirus infection] in this massive country. And because of the fact that we went early, we went early, we could have had a lot more than that . . . we’ve lost nobody, and you wonder, the press is in hysteria mode.“

It’s hard to tell exactly what Trump means here. He could be calling coronavirus a hoax, concerns about its severity a hoax or Democrats’ criticism of his response a hoax. Reputable fact-checking institution Snopes rated the claim that Trump called coronavirus a hoax as a mixture of true and false, noting, “Despite creating some confusion with his remarks, Trump did not call the coronavirus itself a hoax.” 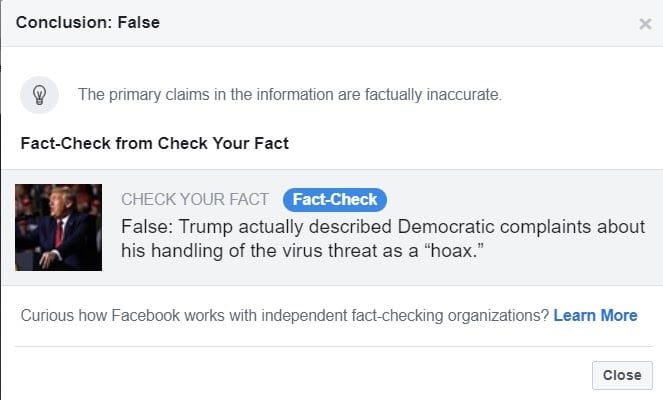 Perhaps Politico and NBC News’ headlines went too far, or perhaps the headlines fairly describe Trump’s characterization of the situation.

But the bigger concern is how Facebook has designed its fact-checking system to prevent other fact-checking partners from auditing the decision of The Daily Caller.

When asked about this, Facebook deflected responsibility, implying the audit process wouldn’t be necessary because all of its fact-checking partners have been certified through the non-partisan International Fact-Checking Network. This group publishes ethics guidelines that include an accuracy standard that requires checkers “maintain high standards of reporting, writing, and editing in order to produce work that is as error-free as possible.” Checkers are also supposed to follow criteria for determining story accuracy, and can apply mid-point labels like “Partly False” or “False Headline,” which The Daily Caller didn’t use here.

Facebook tells me that because it doesn’t think it’s appropriate for it to be the arbiter of truth, it relies on the IFCN to set guidelines. It also noted that there’s an appeals process where publishers can reach out directly to a fact-checker to dispute a rating. But when I followed up, Facebook clarified that publishers can only appeal the fact-checker that labeled them, and can’t appeal to other fact-checkers for a second decision or audit of the original label. 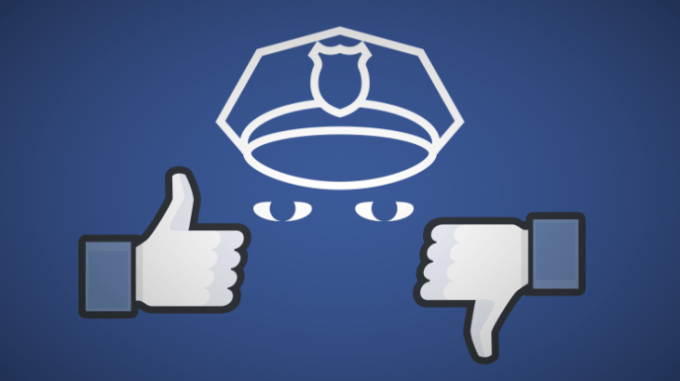 That leaves very little room for controversial or inaccurate labels to be rolled back. A fact-checker would have to be formally rejected by the IFCN for violating its guidelines to lose its status as a Facebook partner.

If Facebook doesn’t want to be the arbiter of truth, it should still establish a process for a quorum of its fact-checking partners to play that role. If consensus amongst other partners is that a label was inaccurate and a story might instead warrant a lesser label or none at all, that new decision should be applied. Otherwise, mistakes or malicious bias from a single fact-checker could suppress the work of entire news outlets and deprive the public of the truth.