Every day, there’s another event-related cancellation owing to concern around coronavirus. Just today Microsoft announced it will not have a presence at the Game Developers Conference in mid-March “out of an abundance of caution.” Facebook also said today that it is canceling its annual F8 conference scheduled for May over coronavirus-outbreak concerns.

The last is a particularly big deal. F8 is by far the largest event that Facebook hosts every year, so it’s little wonder that it plans to host part of the event online.

Likely, Facebook will use its own tech toward this end. But there is a new option for other companies that are right now second-guessing their event plans, and that’s Run The World, a year-old, 18-person company that’s based in Mountain View, Calif., and has small teams both in China and Taiwan.

What it’s doing: smooshing together every functionality that a conference organizer might need in a time of a pandemic. Think video conferencing, ticketing, interactivity and networking.

Who started Run The World: Xiaoyin Qu, who is CEO of the company and previously led products for both Facebook and Instagram (“basically anything to do with entertainment influencers and creators,” she says of part of her time at Facebook).

She dropped out Stanford’s MBA program after a year to start the company last year with Xuan Jiang, a former colleague who was a technical lead for Facebook events, ads and stories. (Jiang does have a master’s degree — one in computer science from the Georgia Institute of Technology.) 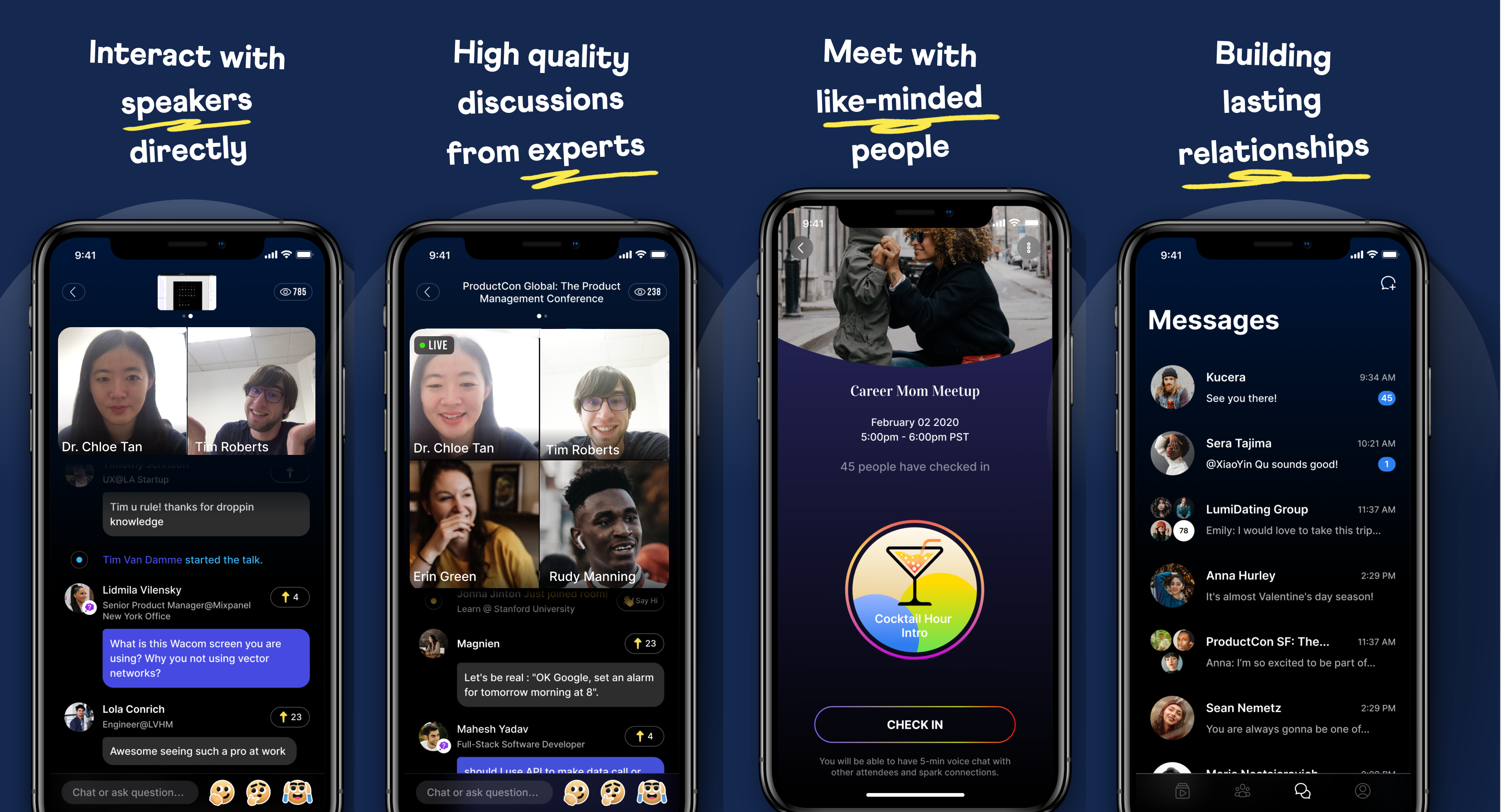 We talked with Qu yesterday after learning about the company from Connie Chan, the general partner who led the deal for a16z.

Qu says the impetus for the startup ties to her mother, a doctor in China who focuses on meningitis and traveled to a conference in Chicago in late 2018 where she made a connection with a Dubai-based physician who was able to share with her some rare, valuable insight into his own work around meningitis.

That might not seem so exceptional to those who travel regularly, but it was enough of an ordeal for Qu’s mother — who had to secure a visa; take off two weeks around the event, including for travel days; and spent a fortune on airfare and accommodations — that it was the first major trip she’d taken in 35 years.

As Qu half-joked, “It isn’t like at Stanford, where there are events held regularly that [local] doctors can even walk over to.”

Indeed, like a lot of founders who solve a pain point for themselves or someone they love, Qu wanted to create a platform where her mother could meet and have meaningful work connections with people regularly, and this would mean remotely, through digitized events.

Turns out, her timing is pretty good. Though numerous startups have launched live online events businesses in the past (many of them since shuttered), you can bet many more organizers are thinking about exactly the type of platform that Run The World is fine-tuning right now.

Though publicly launched just four months ago, it has already hosted dozens of events and has hundreds in the pipeline, says Qu. One of its customers is Wuhan2020, a large open-source community with more than 3,000 developers who will be using the platform as part of a long-distance hackathon that hopes to produce tech solutions for those affected by coronavirus in Wuhan.

Qu also points to an elephant conservation reserve in Laos that was recently able to raise $30,000 from donors in 15 countries across two weeks through a conference it organized on the platform. The reserve had a constrained budget, but being able to bring together a distributed audience (beyond just wealthy donors) for nearly zero overhead (no venue, no catering), turned it into a major success for the organization.

Smaller events are finding the platform, too. In just one instance, a dating coach who specializes in working with engineers recently held a workshop. Just 40 people showed up, says Qu, but this individual was able to make $1,300 from the event.

Run The World keeps the cost structure simple, taking 25% of ticket sales in exchange for what it provides organizers, from the templates they create, to ticket sales, to payment processing (via Stripe), streaming, enabling social interactions throughout the event, and helping organizers follow up with attendees afterward.

Indeed, beyond enabling organizers to reach a wider audience at perhaps a more accessible price point, a big advantage conferred by online events is the potential for more effective networking, insists Qu. For example, rather than walk into a physical space where it’s sometimes hard to know who to talk with about what, Run The World asks every event attendee to create a video profile akin to an Instagram story that can help inform other attendees about who they are.

It also organizes related “cocktail parties” where it can match attendees for several minutes at a time.

Naturally, there are also downsides to streamed live events as the world was reminded last year, when a gunman filmed his mass murder of dozens of people in Christchurch, New Zealand on Facebook Live.

One could also imagine that those video profiles could attract unwanted attention to some attendees who might rather just watch an event.

These are certainly facets of the business about which Qu and Jiang are well aware. While the plan is to keep adding new features (including, potentially, to use LinkedIn to validate attendees’ identities), Qu notes that another way to ensure the quality of the events on the platform remains high — and that attendees feel safe — is to steer clear of most free events.

“When organizers are recruiting their own people and curating a community” of paid attendees who they know or can ostensibly learn more about, it keeps things above the level, she suggests, noting that paid attendees also show up in far greater numbers.

As Run The World scales, she concedes, “we’ll need to figure out new ways.”

Certainly, the lessons learned at Facebook and Instagram should help as the business picks up momentum and creates more structure around its offerings. Besides, Qu adds, “The ideal event to me isn’t one with 2 million people. I’d rather we hosted 2 million events with 50 people.”