Monday.com, announced version 2.0 of its flexible workflow platform today, making it easier for customers to build custom apps on top of Monday.

Company co-founder and CEO Roy Mann says his product is a multi-purpose and highly flexible workflow tool, aimed mostly at medium-sized businesses. “It’s process management, portfolio management, project management, CRM management, hotel management, R&D management. It’s anything you want because we give you the building blocks to build whatever you want,” he said.

With the release of 2.0, the company is offering a code-free environment to take these building blocks and build custom applications to meet the needs of any organization or team. This can include workflow elements to set up a process inside Monday or integrate with other apps or services.

In fact, the new release includes over a hundred prebuilt automation recipes and code-free custom-automations along with more than 50 integrations with other apps, allowing project managers to build fairly sophisticated workflows without coding. 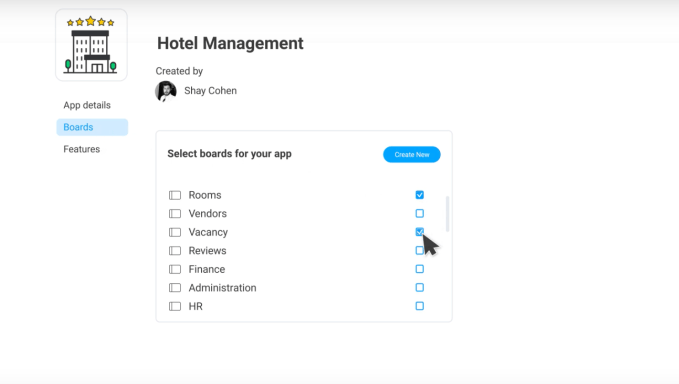 This example shows a company building a custom app to manage a hotel. Screenshot: Monday.com

The company is also opening up the Monday platform to developers who want to build applications on top of the platform. Mann says this is just the start, and the plan is to eventually add a marketplace for these apps.

“The first step will be we’re opening [the platform to developers] up in beta. [Initially], it will be for their own use and for their customers, and then we will open it up pretty soon for them to offer those apps [in a marketplace]. That’s obviously the direction,” Mann said.

With $120 million in ARR and 100,000 customers, the company has quietly gone about its business. It has 370 employees, mostly based in Israel, and has raised $273 million, according to Mann. Its most recent investment came last July — $150 million on a lofty $1.9 billion valuation.