Netflix grew by 8.8 million net subscribers in the fourth quarter of 2019, according to its latest earning report, putting its growth well ahead of its forecast of 7.6 million.

The company says it has 167 million paid memberships worldwide, with more than 100 million outside the United States. It also reported stronger-than-expected financials, with revenue of $5.47 billion and earnings per share of $1.30, compared to analyst estimates of $5.45 billion and EPS of 53 cents.

That’s all despite the launch of two major streaming services, Disney+ and Apple TV+, with more competition coming this year from WarnerMedia’s HBOMax and NBCUniversal’s Peacock.

Netflix addresses the competitive landscape in its letter to shareholders, arguing that there’s “ample room for many services to grow as linear TV wanes,” and noting that during Q4, “our viewing per membership grew both globally and in the US on a year over year basis, consistent with recent quarters.” 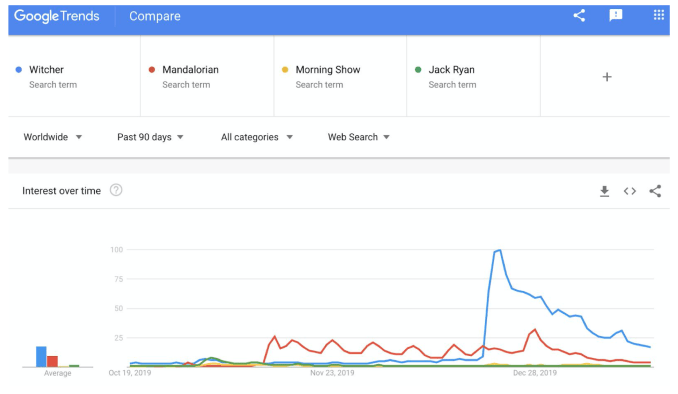 That might seem like an unfair comparison, especially since Disney+ is only available in a handful of countries so far, but Netflix argues, “If Disney+ were global we don’t think the picture would be much different, to judge from the ​NL results​ where Disney+ first launched.”

In fact, Netflix says “The Witcher” is on-track to become “our biggest season one TV series ever,” with 76 million member households choosing to watch the show. It also says 83 million households chose to watch the Michael Bay-directed action film “6 Underground.”

If you’re wondering about the slightly awkward “chose to watch” phrasing — yep, Netflix is switching up the (already controversial) way that it reports viewership. While it previously shared the number of accounts that watched at least 70% of an episode or film, it’s now looking at how many members chose to watch a show or movie, and then actually watched for at least two minutes (“long enough to indicate that the choice was intentional”).

The company says this increases viewer counts by an average of 35%.

“Our new methodology is similar to the BBC iPlayer in their rankings​ based on ‘requests’ for the title, ‘most popular’ articles on the New York Times which include those who opened the articles, and YouTube view counts,” Netflix says. “This way, short and long titles are treated equally, leveling the playing field for all types of our content including interactive content, which has no fixed length.”

One dark cloud in the earnings report is what appears to be slowing growth, with 7.0 million projected net additions in Q1 of this year, compared to 9.6 million net adds in the first quarter of 2019. Netflix attributes this to “the continued, slightly elevated churn levels we are seeing in the US,” as well as more balance between Q1 and Q2 growth this year, “due in part to the timing of last year’s price changes and a strong upcoming Q2 content slate.”