For the last few years, blockchain startup Kadena has been working on a vision of bringing blockchain to the enterprise. Today it announced the final piece of that vision with the launch of the Kadena public blockchain.

In earlier releases, the company offered the ability to build private blockchains on AWS or Azure. Company co-founder and CEO Will Martino says the public network brings together for the first time public and private chains in a hybrid vision.

“The big exciting thing is that the public chain is out, smart contracts are about to turn on, and that allows us to then go and hit the market with what we’re calling these hybrid applications. These are applications that run both on a private blockchain, but have public smart contracts that allow people on the public side to interact with the private chain,” Martino explained.

The smart contracts are a set of rules that must be met and validated for the private and public chains to interact. Only valid actors and actions as defined in the smart contract and will be allowed to move between the two chains.

One of the major challenges with building a chain like this has been scaling it to meet the needs of enterprise users. Martino says that his company has solved this problem and can scale from the 10 chains today to 10,000 or more in the future as the company grows. He further claims that his company is the only one with a tractable roadmap capable of achieving this.

Martino says this could help push companies who have been dabbling in blockchain technology in the last couple of years to take a bigger leap. “This is a watershed moment for enterprises. Up until now, they’ve never had a platform that they could go and use on a public blockchain platform and know that it’s going to have the throughput they need if the product they deployed on that blockchain has legs and starts to take off.” Martino says this blockchain has that. 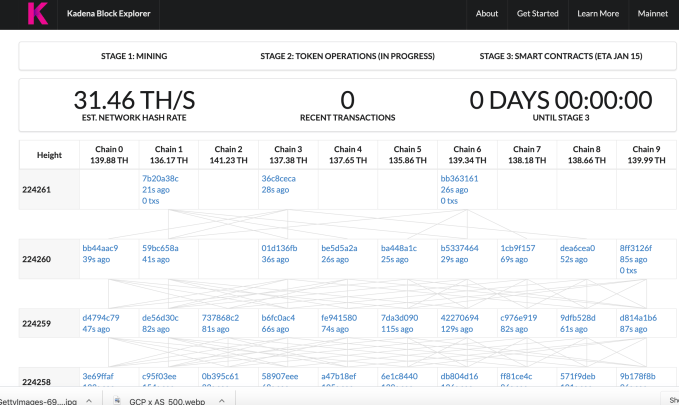 Kadena has also developed an open-source smart contract language called Pact that Martino says allows a lawyer with Excel-level programming understanding to write these contracts and place them on the chain.

“There are a lot of lawyers who are good with Excel, so you can actually hand the smart contracts to a lawyer and have them review them for compliance. And that’s a crazy idea, but we think it’s fundamental because when you’re representing core business workflows that are sensitive, you need to be absolutely certain they are compliant.”

The company is making all of the basic pieces available for free. That includes the private chain development tools on AWS and Azure, the public chain released today, along with the Pact smart contract language.

Martino says there are a couple of ways for the business to make money. For starters, it’s building partnerships where it helps companies in various sectors, from financial services to insurance and healthcare, build viable hybrid applications on the Kadena blockchain. When they make money, so will Kadena.

Secondly, they control a bushel of tokens on their public network, which have value, and if the vision comes to fruition, will have much more over time. They will be able to sell some of these tokens on the public market and make money. Right now he says the tokens have a value of between 20 cents and a dollar, but he expects that to increase as the network becomes more viable.

The blockchain has lost some of its luster as it has moved through the enterprise hype cycle in recent years, but if Kadena can succeed in building a fully decentralized, scalable blockchain, it could help push the technology deeper into the enterprise.

The blockchain begins finding its way in the enterprise