Previous investors in Midnite include London VC firm Venrex Investment Management, as well as unnamed “founders and executives” from leading gaming companies, including Betfair and GVC. The new round brings the total raised by the 2016-founded company to around $4.5 million.

“The esports market is seeing rapid year-on-year growth and we believe that betting represents the single biggest opportunity in this space,” Midnite co-fonder Nick Wright tells TechCrunch. “Wagering on esports is expected to exceed $12 billion by the end of 2020, making betting already one of the fastest growing verticals within esports.”

However, despite the size of opportunity, Wright says that for most big sports betting sites, esports is “just another tab” in their legacy sports betting offering, but that esports fans are not simply just another type of sports fan. “They are an entirely new customer category and deserve a platform tailored to them,” he says. “This is why Midnite exists.”

With that in mind, Wright pitches Midnite as an “entertainment platform” that provides an immersive experience for esports fans. He says fans get the thrill of watching, analysing and betting on their favorite teams and players as they face off in tournaments around the world.

“What makes esports differ from other sports is the constant action and its highly dynamic nature,” says the Midnite co-founder. “This is conducive to a variety of live betting opportunities that you can seldom find in real sports. Users can bet on your standard match winners and losers, but they can also bet on unique selections such as next kill or next objective achieved while matches are in-play.” 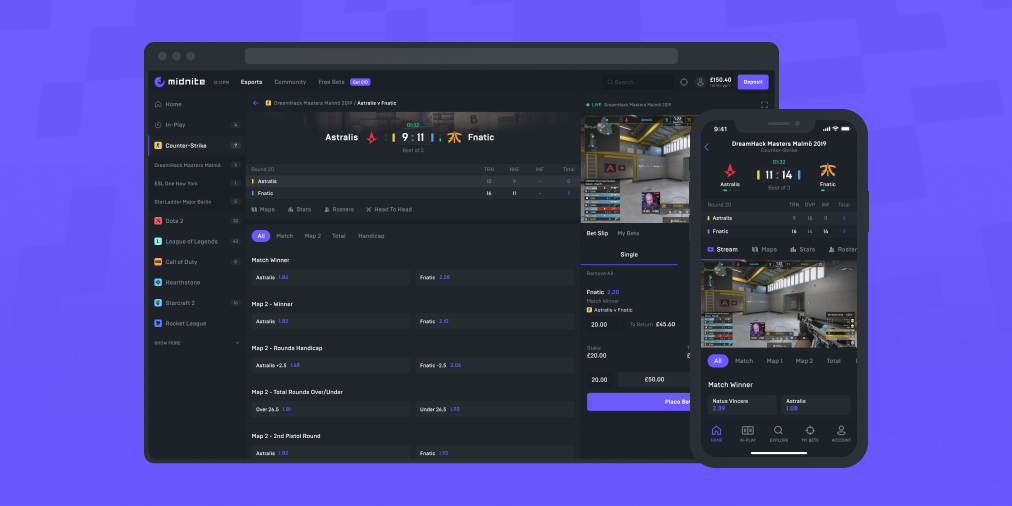 Noteworthy, although operating in an invite-only beta, the startup has already acquired a betting license in the U.K., which Wright points out is the biggest betting market in the world.

He says this makes Midnite the only dedicated esports betting platform that accepts customers in the U.K, and that the company is focused on operating globally in jurisdictions that can legally accept customers. “[We] are acquiring additional licenses to do so,” he adds.

“In the past, betting on esports has been carried out by unregulated operators, which meant that the unregulated market was several times bigger than the regulated market. Many operators offering esports betting would not be licensed, were not taking responsible gambling seriously or even performing age verification checks. This meant customers want to bet on esports were often placing themselves at risk.

“We are creating a safe and responsible environment for these fans. Customer safety is our top priority and we are taking it very seriously. We are doing everything by the book to ensure our community is safeguarded and are compliant with all the regulations in markets where we are operational.”