Back in February, we wrote that Postscript “wants to be the Mailchimp for SMS.” Now they’ve raised $4.5 million to help get it done.

Postscript is meant to help e-commerce companies — specifically Shopify shops, currently — connect with their existing customers over SMS. Their Shopify plugin lets store owners run SMS marketing campaigns with customers who’ve opted in, have two-way conversations with users who respond and analyze the data to figure out what’s working. 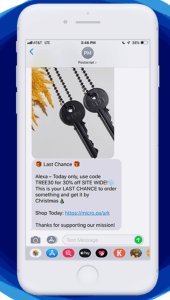 Got a new product hitting the shelves and want to let your most frequent customers know first? Plug the message into Postscript’s dashboard, tell it what segment of your customer base you want to receive it and send away. Their analytics backend will tell you how many people received it, how many actually clicked through and how much revenue you pulled in from those clicks.

If a customer types out a text and responds, it’ll pop up in the backend like a support ticket. Shop owners and employees can respond and have direct conversations, answer questions and close out the ticket through the dashboard — or they can automatically pipe them into services like Zendesk or Zapier.

But what about spam? Our text message inboxes tend to feel like the last refuge from the overwhelming onslaught of marketing messages that have ruined e-mail; do we really want shops pinging our phones directly every time they’ve got a new pair of pants?

It seems like Postscript is pretty mindful of this, and is building things in a way that limits just how “spammy” anyone on the platform can be — partly because (as we’ve seen with e-mail) flooding users with unwanted messages ensures that messages just don’t get opened, and partly because SMS is much more tightly regulated than many other messaging protocols. Under the Telephone Consumer Protection Act (TCPA) in the U.S., for example, SMSing marketing messages to someone without an explicit opt-in can get the company nailed with fines of thousands of dollars per text.

As Lucas Matney wrote in February:

The opt-in process for phone communications is already a bit more codified in the U.S., and as companies attempt to stay in the good graces of GDPR for fear of the EU god, it might be more likely they tread carefully.

As such, everything is opt-in, and easily opted out of if a user changes their mind. It also helps, of course, that sending SMS isn’t free for the companies. Each SMS you send to a customer who doesn’t care is money wasted — so there’s interest on all sides on limiting messages to just the folks who actually want them.

Postscript pricing varies depending on how many messages a shop is looking to send each month. Paid plans start at $50 a month for 1,500 SMS, climbing up to $2,000 per month for 83,000 messages — after that, they ask shops to reach out for a custom plan. Postscript co-founder Alex Beller tells me the company currently has around 530 paying customers, each spending anything from $50 per month to “the mid five figures.”