Accel, one of the world’s most influential venture capitalist firms, is getting more bullish on India.

The Silicon Valley-headquartered firm, which largely focuses on early-stage investments, said today it has closed $550 million for its sixth venture fund in India.

This is a significant amount of capital for Accel’s efforts in the country, where it began investing 15 years ago and has infused roughly $1 billion through all its previous funds.

Anand Daniel, a partner for Accel in India, told TechCrunch in an interview that the VC fund will continue to focus on identifying and investing in seed and early-stage startups.

But the fund realized it needed more money so it could actively participate in follow-on rounds (later-stage financing rounds) of its portfolio startups. The announcement today follows Accel’s similar recent push in Europe and Israel, where it closed a $575 million fund.

“We also selectively do growth investments for companies that are scaling well, such as Swiggy, UrbanClap, Blackbuck and Bounce. We have continued to back them through Series B and Series C rounds,” he said.

At the risk of being accused of bias, I'll say this: Accel India is a rare Indian fund that had credible exits and more promising exits in the pipeline. They're also some of the nicest people to work with. https://t.co/aZGjDgSQKe

Like in many other markets, Accel’s track record in India is quite impressive. It participated in the seed financing round of e-commerce firm Flipkart, which was then valued at $4 million post-money. Walmart bought a majority stake in Flipkart last year for $16 billion. (This helped Accel net more than $1 billion in return from Flipkart.)

Accel, which has nine partners and more than 50 members in total in India, also invested in the seed round of SaaS giant Freshworks, which is now valued at more than $3 billion, food delivery startup Swiggy, also valued at north of $3 billion, and recently turned unicorn Blackbuck. Accel has been the first institutional investor for 85% of startups in its portfolio.

The VC firm says 44 of the 100-odd startups in its India portfolio today are valued at over $100 million each. In total, including Flipkart’s $21 billion market value, Accel’s portfolio firms have created $44 billion in market value. 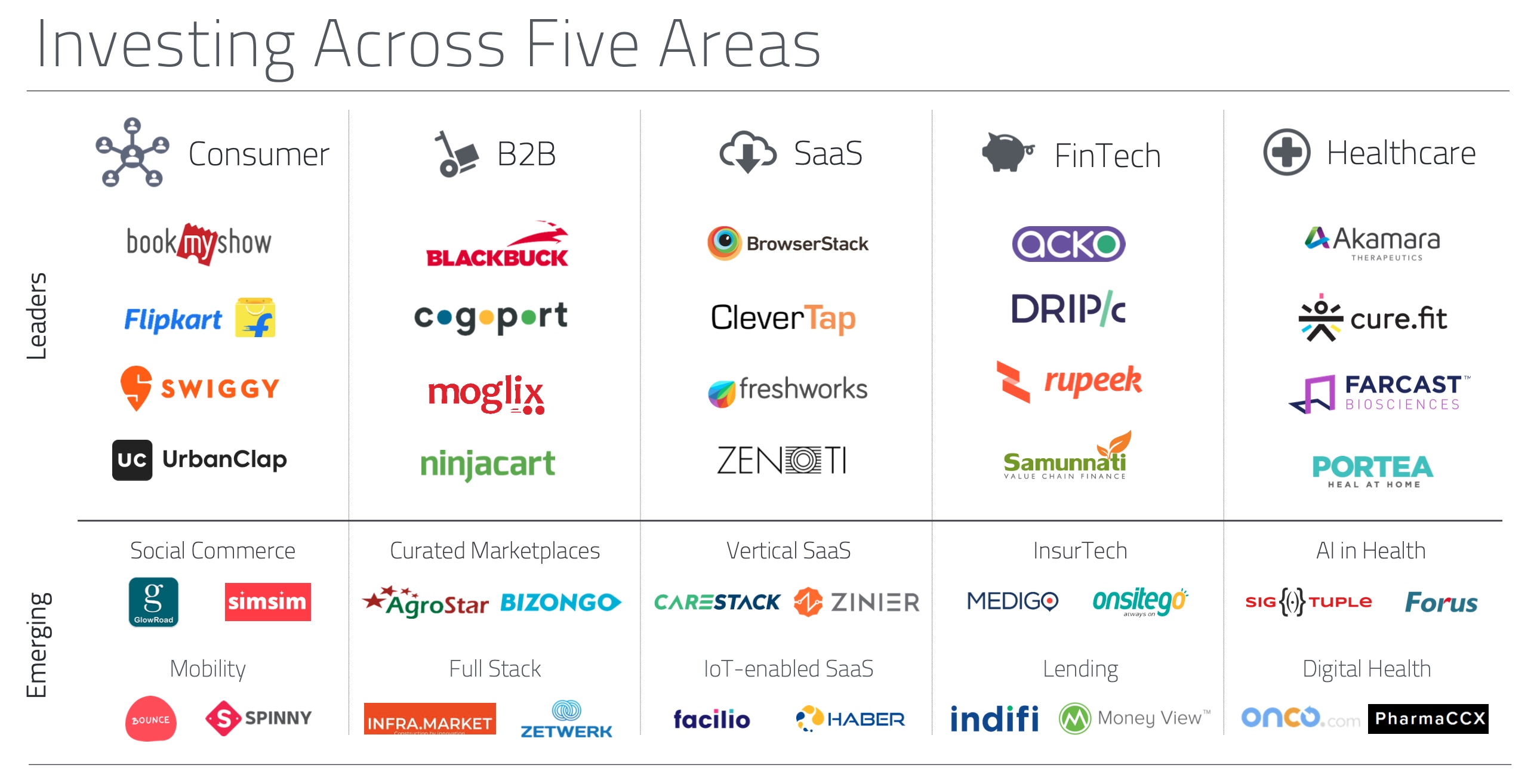 Some of the investments Accel has made in India

“When we started our first fund in India in 2005, the world was a very different place. Just 1 in 50 Indians had access to the internet and mobile phone ownership was nascent. ​Yet we firmly believed that India was on the cusp of a big change,” the firm said in a statement.

“Today, the opportunity ahead is significantly bigger than when we started in 2005: India can now digitally identify 1.3 billion people, has 600 million internet users and 150 million online transacting customers with a national payments platform that processes $20 billion a month.”

Daniel said moving forward Accel will continue to focus on consumer, business-to-business, fintech, healthcare and global SaaS categories. “We have nine partners with their own areas of interest. They invest from their own conviction and finance seed rounds. If we see a particular sector evolving, then we do a deeper thesis work,” he said.

“We then develop deeper confidence for the space. For example, back in the day we invested in mobility startup TaxiForSure, long before Uber had arrived in India. That helped us understand mobility well. We have used those learnings to invest in several more mobility startups.”

Accel’s growing interest in India comes at a time when several other giants, including SoftBank and Prosus Ventures, have also become more active in the nation — though they tend to finance later-stage rounds.

For Indian startups that are already having their best year, this can only be good news.