Paytm said on Monday it has raised $1 billion in a new financing round as the Noida-headquartered firm, which once dominated the local mobile payments market, attempts to fight back giants Google, Walmart’s PhonePe, and Facebook.

The company said the new financing round, dubbed Series G, was led by U.S. asset manager T. Rowe Price. Existing investors Ant Financial (contributed $400 million), SoftBank Vision Fund (contributed $200 million), and Discovery Capital also participated in the round, which valued the company at about $16 billion — higher than any other local startup and some of the high-profile Asian startups such as Grab and Gojek.

Paytm mobile wallet enables users to transfer money to each other, pay for food delivery and clear utility bills, buy train and movie tickets as well as secure small loans. One97 Communications, which operates Paytm, has raised more than $3.3 billion to date.

Paytm founder and chief executive Vijay Shekhar Sharma (pictured above) said the firm will use the fresh capital to court merchants as the company looks to expand its presence among small and medium-sized businesses. The company will also work on expanding its financial offerings such as lending and insurance. Paytm, which also offers its mobile wallet service in Japan, has amassed 15 million merchants, most of whom have come online in recent years, in India, he said.

“This new investment by our current and new investors is a reaffirmation of our commitment to serve Indians with new-age financial services,” he said.

The big buck comes as India turns into the newest payments battleground for major global giants Google, Walmart, and Facebook. According to Credit Suisse, the digital payments market in India will be worth $1 trillion in the next four years, up from about $200 billion currently.

According to industry estimates, more than 100 million people in India today use mobile payments services. Paytm, which led the local market in peer-to-peer mobile payments two years ago, saw its daily usage skyrocket after New Delhi invalidated much of the cash in circulation in the country in late 2016. (Other local mobile wallet services such MobiKwik and Freecharge also reported growth during the period.)

At a company party in late 2016, Sharma told ecstatic employees that “nobody can beat Paytm. India finally has its own technology giant.” But in the following months, a score of companies including Amazon, Google, and Samsung entered the payments market in India, leveraging an open payments infrastructure called UPI (Unified Payments Interface) built by a coalition of banks — and backed by the government.

National Payments Corporation of India, which oversees UPI infrastructure, revealed earlier this month that UPI had surpassed a 100 million users. In October alone this year, UPI topped a billion transactions. 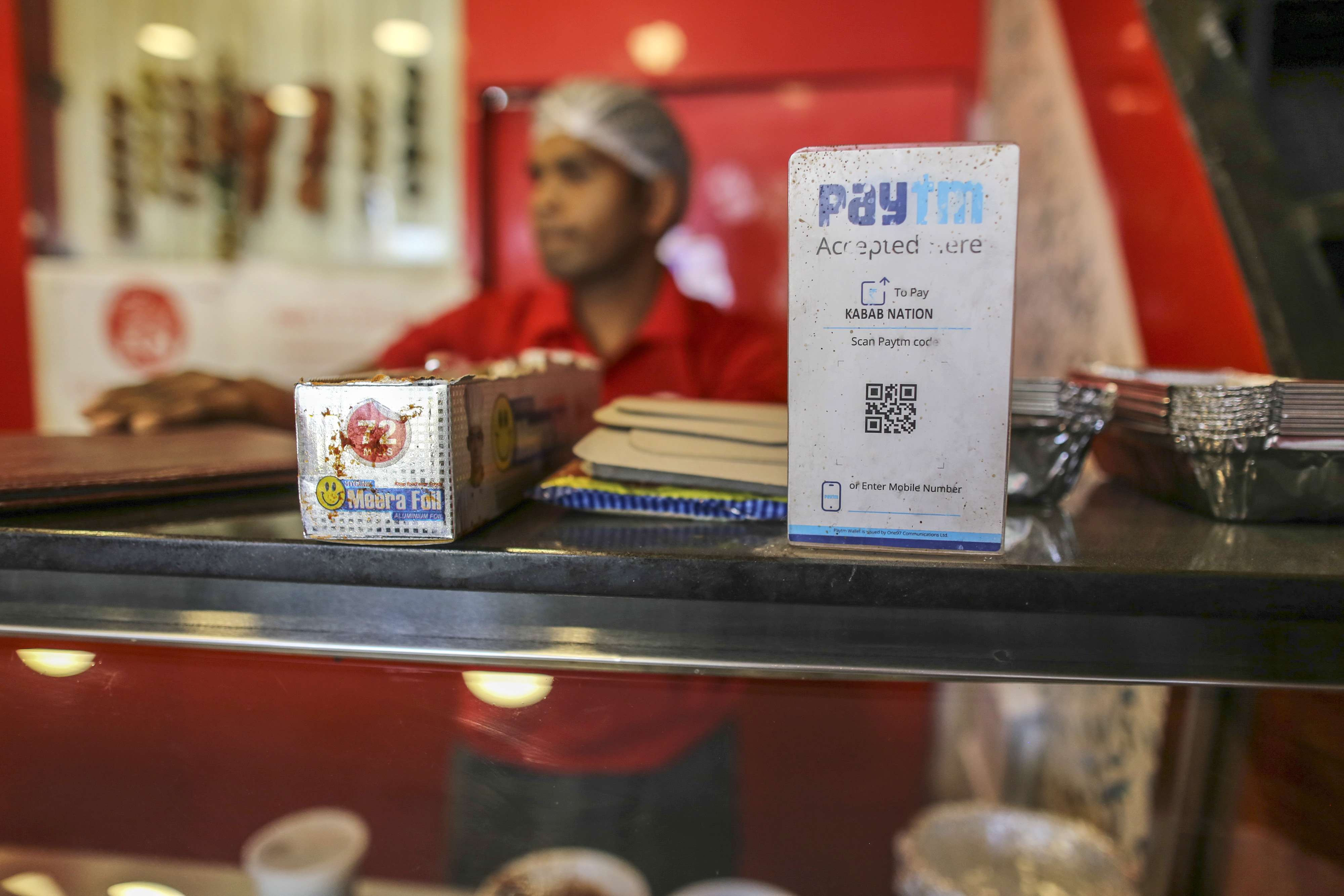 An employee stands at a counter as a sign for PayTM online payment method, operated by One97 Communications Ltd., is displayed at a fast food restaurant in Bengaluru, India. Photographer: Dhiraj Singh/Bloomberg via Getty Images

Paytm, in the meantime, has focused on expanding to other categories such as e-commerce platform, games, and ticketing business. The company is also aggressively trying to sign up merchants across small cities and towns in India. The company, which is serving merchants in over 2,000 towns and cities in the country, leads the peer-to-merchant market, according to internal slides seen by TechCrunch.

In September, Paytm said that over the next two years it would invest another $2.7 billion in the business. Sharma told TechCrunch in an interview earlier that the company plans to consider filing for its IPO after two to three years. In last six months, he claimed the company has cut its “burn” by more than a third.

Today, we open next chapter in Paytm’s journey of India’s financial inclusion. We commit to invest additional ₹10,000 crore to serve financially unserved / underserved.
Thank you for your guidance and support.
Dedicating it with my school time favorite Jai Shankar Prasad poem:

Engaging with merchants is one of the few ways a payments firm in the country can currently make profits. At a fintech conference in Bangalore last week, hosted by firm Razorpay, Sajith Sivanandan, Managing Director and Business Head of Google Pay and Next Billion User Initiatives, said current local rules have forced Google Pay to operate without a clear business model.

Answering a question from the audience, he urged the local payments bodies to “find ways for payment players to make money” to ensure every stakeholder had incentives to operate.

If those challenges weren’t enough, WhatsApp, which has amassed more users than any other service in India, is expected to roll out its payments service to all of its 400 million users in the country in the coming weeks.

At the same conference, Abhijit Bose, head of WhatsApp in India, said the Facebook-owned firm believes that India has just begun its payments revolution. At another conference earlier this month, Bose said the company sees massive opportunities in India and hopes to offer a range of financial services to people in the nation over the coming years.