Hello and welcome back to TechCrunch’s China Roundup, a digest of recent events shaping the Chinese tech landscape and what they mean to people in the rest of the world. Last week, we looked at how Alibaba and Tencent fared in the last quarter; the talk in Silicon Valley and Beijing this week is on Y Combinator’s sudden retreat from China. We will also discuss the enduring food delivery war in the country later.

Brief adventure in the East

The storied Silicon Valley accelerator Y Combinator announced the closure of its China unit just a little over a year after it entered the country. In a vague statement posted on its official blog, the organization said the decision came amid a change in leadership. Sam Altman, its former president who hired legendary artificial intelligence scientist Lu Qi to initiate the China operation, recently left his high-profile role to join research outfit OpenAI. With that, YC has since refocused its energy to support “local and international startups from our headquarters in Silicon Valley.”

What was untold is the insurmountable challenge that multinationals face in their attempt to win in a wildly different market. Lu Qi, who wore management hats at Baidu and Microsoft before joining YC, was clearly aware of the obstacles when he said in an interview (in Chinese) in May that “multinational corporations in China have almost been wiped out. They almost never successfully land in China.” The prescription, he believes, is to build a local team that’s given full autonomy to make decisions around products, operations, and the business.

A former executive at an American company’s China branch, who asked to remain anonymous, argued that Lu Qi’s one-man effort can’t be enough to beat the curse of multinationals’ path in China. “All I can say is: Lu has taken a detour. Going independent is the best decision. When it comes to whether Chinese startups are suited for mentorship, or whether incubators bring value to China, these are separate questions.”

What’s curious is that YC China seemed to have been given a meaningful level of freedom before the split. “Thanks to Sam Altman and the U.S. team, who agreed with my view and supported with much preparation, YC China is not only able to enjoy key resources from YC U.S. but can also operate at a completely independent capacity,” Lu said in the May interview.

Moving on, the old YC China team will join Lu Qi to fund new companies under a newly minted program, MiraclePlus, announced YC China via a Wechat post (in Chinese). The initiative has set up its own fund, team, entity and operational team. The deep ties that Lu has fostered with YC will continue to benefit his new portfolio, which will receive “support” from the YC headquarters, though neither party elaborated on what that means.

The food delivery war in China is still dragging on two years after the major consolidation that left the market with two major players. Meituan, the local services company backed by Tencent, has managed to attain an expanding share against Alibaba-owned Ele.me. According to third-party data (in Chinese) provided by Trustdata, Meituan accounted for 65.1% of China’s overall food delivery orders during the second quarter, steadily rising from just under 60% a year ago. Ele.me, on the other hand, has lost nearly 10% of the market, slumping to 27.4% from 36% a year ago.

In terms of monetization, Meituan generated 15.6 billion yuan ($2.2 billion) in revenue from its food delivery segment in the quarter ended September 30. That dwarfs Ele.me, which racked up 6.8 billion yuan ($970 million) during the same period. Both are growing north of 30% year-over-year. 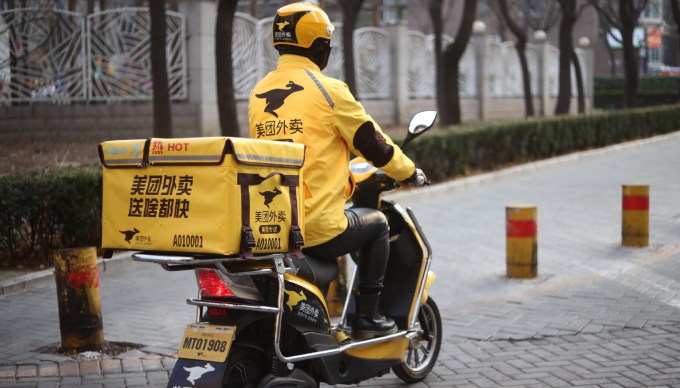 This may not be all that surprising given Alibaba has arguably more imminent battles to fight. The e-commerce leader has been consumed by the rise of Pinduoduo, which has launched an assault on China’s low-tier cities with its ultra-cheap products and social-driven online shopping experience. Meituan, on the other hand, is fixated on beefing up its main turf of on-demand neighborhood services after divesting its costly bike-sharing endeavor.

When both contestants have the capital to burn through — as they have demonstrated through heavily subsidizing customers and restaurants — the race comes down to which has greater control of user traffic. Meituan holds a competitive edge thanks to its merger with Dianping, a leading restaurant review app akin to Yelp, back in 2015. Dianping today operates as a standalone brand but its food app is deeply integrated with Meituan’s delivery services. For example, hundreds of millions of users are able to place Meituan-powered food delivery orders straight from Dianping.

Alibaba and Meituan used to be on more friendly terms just a few years ago. In 2011, the e-commerce giant participated in Meituan’s $50 million Series B financing. Before long, the two clashed over control of the company. Alibaba is known to impose a heavy hand on its portfolio companies by taking up majority stakes and reshuffling the company with new executives. That’s because Alibaba believes that “only when you operate can you generate synergies and really create exponential value,” said vice chairman Joe Tsai in an interview. “Whereas if you just make a financial investment, you’re counting an internal rate of return. You’re not creating real value.”

Ele.me lived through that transformation. As of September, Alibaba has reportedly (in Chinese) completed replacing Ele.me’s management with its pool of appointed personnel. Ele.me’s founder Zhang Xuhao left the company with billions of yuan in cash and joined a venture capital firm (in Chinese).

Meituan’s founder Wang Xing had more unfettered pursuits. In a later financing round, he refused to accept Alibaba’s condition for portfolio companies to eschew Tencent investments, a strategy of the giant to hobble its archrival. That botched the partnership and Alibaba has since been gradually offloading its Meituan shares but still held onto small amounts, according to Wang in 2017, “to create trouble” for Meituan going forward.