Adobe has taken quite a bit of heat for its release of Photoshop on the iPad, mostly because it’s not as feature-complete as a lot of users were hoping, given that this is meant to be a full version of Photoshop on par with the desktop edition on Apple’s tablet OS for the first time. Adobe has long cautioned that it would essentially be releasing an in-development version of Photoshop for iPad, and adding features as it goes, but now it’s adding some more clarity and specificity to its product roadmap, which might help allay customer criticism.

In the time remaining in 2019, which is not much, Adobe is planning to ship a couple of features that should improve the everyday experience of working with Photoshop on iPad. First, it’s going to offer “Select Subject,” which will hopefully go a long way to address the omission of the so-called “Magic Wand” selection tool. Demoed at Adobe MAX just a few weeks ago, the “Select Subject” feature works with Adobe’s Sensei AI tech to automatically pick out the subject from a selection box. It’s live now in the desktop version of Photoshop and works surprisingly well, and allows you to quickly pick out objects and mask them or move them for manipulation in creating compositions. This single feature, provided it works well on iPad, would go a long way to making it a much more effective tool for creative pros. 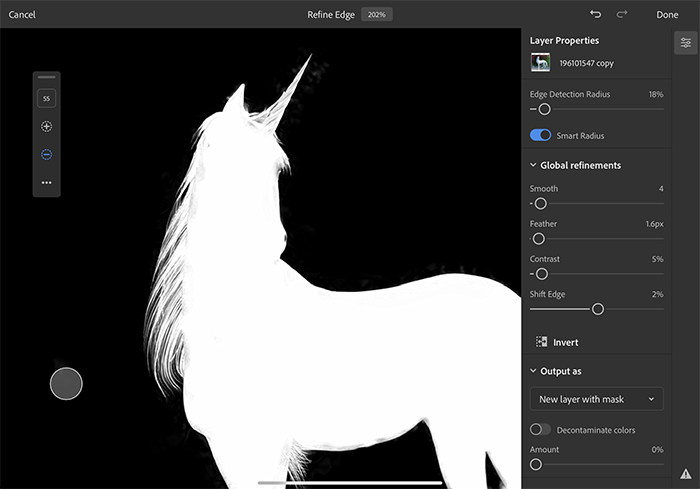 The other feature the team is aiming to ship this year is introducing a speedier, optimized version of the cloud documents system it introduced for Adobe Creative Cloud alongside Photoshop for iPad. These improvements will make upload and download fast for all PSD flies stored as cloud documents, which should make working across platforms even better.

Looking ahead to 2020, the list of features coming to the iPad grows longer, and includes key elements like the “Refine Edge” brush that helped to improve selection of fine detailed textural elements like hair or fur. That’s another key feature for anyone looking to do the same kind of creative composition work on the iPad that they currently do on desktop. Also coming in 2020 are Curves for making tonal adjustments, as well as more features for layer-based, non-destructive adjustment tools. Photoshop on iPad will also gain brush sensitivity and canvas rotation, both currently on offer form the company on its Fresco digital painting app.

Another feature that is planned for 2020 that will bring better parity with Adobe’s desktop software is Lightroom integration for Photoshop. That will allow you to edit RAW files in Lightroom and then directly switch over to Photoshop to do further edits within the same workflow.

This probably isn’t an exhaustive list of everything Adobe plans to do with Photoshop on the iPad in the next year, and in fact the company is calling for users to provide feedback about feature additions and improvements via its official user feedback tool.