Karma Automotive took the wraps off Tuesday of a new electric concept car called the SC2 that produces a heart-thumping 1,100 horsepower and can travel from 0 to 60 miles per hour in 1.9 seconds.

The concept is a showpiece and an integral part of the Chinese-backed California-based startup’s new strategy to become a technology and design incubator that supplies other automakers.

Karma Automotive also unveiled Tuesday at Automobility LA, the press and trade days of the LA Auto Show, a performance variant of its Revero GT. The new Revero GTS is similar to the Revero GT, but boasts more performance and several other new interior and tech touches.

Meanwhile, the SC2 — with its eye-popping looks and performance specs — is meant to be show what Karma can do, not necessarily what it will do.

“Our open platform serves as a test bed for new technologies and partnerships, where we are to provide engineering, design, technology and customization resources others,” Zhao said.

The nuts and bolts

The battery-electric concept has front and rear mounted twin electric motors that deliver 800 kW peak power, with 10,500 pound-feet wheel torque and 350 miles of pure electric range. The I-shaped 120 kilowatt-hour battery is housed in the center tunnel beneath the dashboard and seats.

The hinge-winged doors aren’t the only flashy or tech-forward features. The concept has long-range radars, cameras, and FMCW lidar sensors in a nod towards an autonomous driving future. 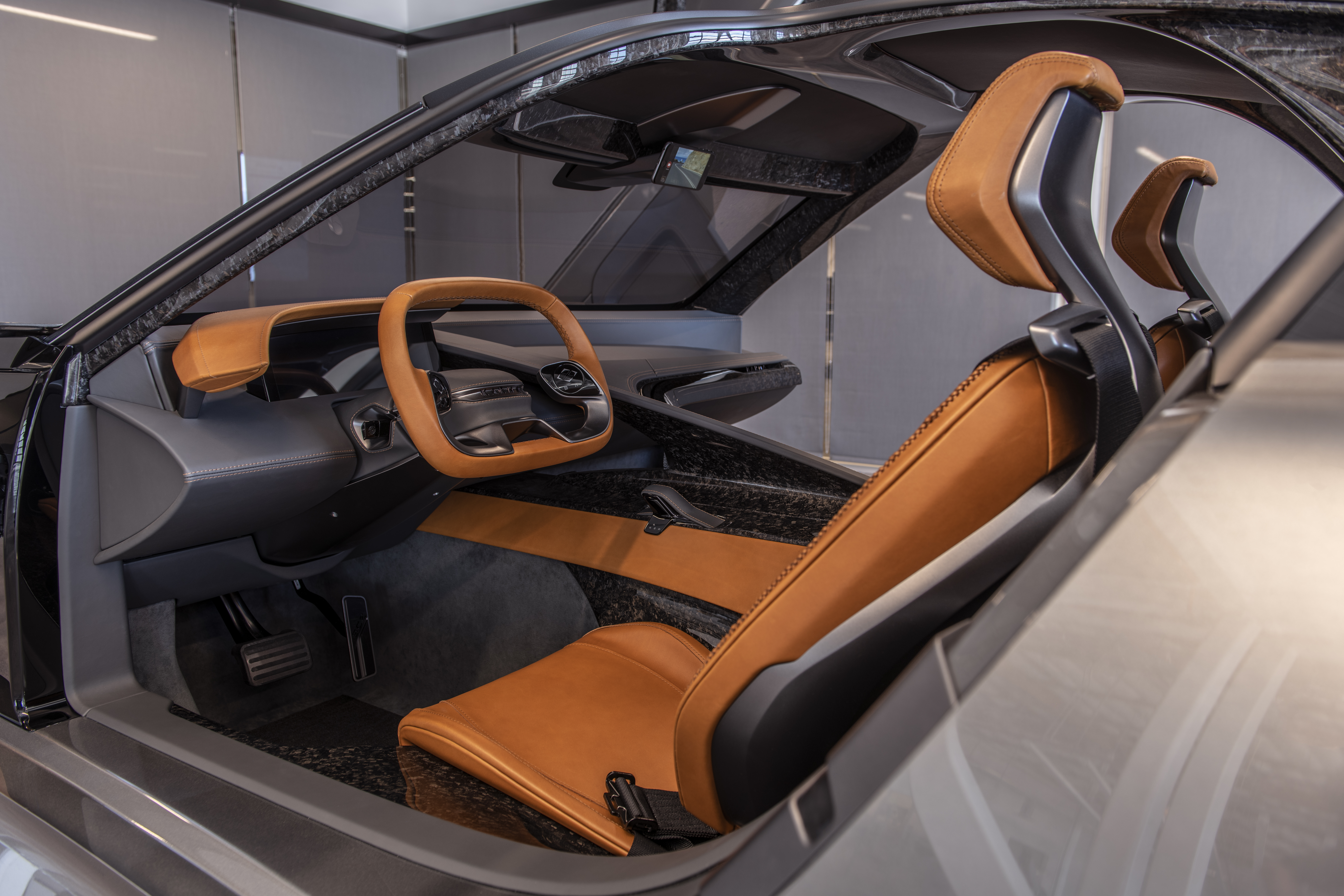 Drivers will theoretically (this is a concept after all) enter the vehicle through fingerprint and facial recognition sensors. Inside the vehicle, there are biometric seats and 3D audio to create individual sound zones for driver and passenger. Electro chromatic glass shifts from clear to opaque for privacy and light sensitivity.

Karma also showed a feature that lets drivers re-live their street-racing adventures through a simulation. A triple high definition camera under the windshield and frequency-modulated
continuous wave lidar sensors capture of the car in motion. At the same time, software captures in real-time all of the turns, braking and acceleration of driving.

After the drive, an adaptive laser projector replays the journey while the vehicle is parked. A mounted smartphone acts as the cabin’s rear-view mirror and turns it into a driving simulator where the user can re-experience their drive and fine-tune their skills.

And of course, drivers can then share that experience with others or stream drivers’ routes from
around the world within their own vehicles.

SC2’s technology can be integrated into a variety of future vehicles, according to Andreas Thurner, Karma’s vp of global design and architecture.

And that’s the whole point of this exercise. It’s unlikely that the SC2 will ever be made as a production vehicle. But the tech and design features in it could live on.

Karma Automotive’s roots began with Fisker Automotive, the startup led by Henrik Fisker that ended in bankruptcy in 2013. China’s Wanxiang Group purchased what was left of Fisker in 2014 and Karma Automotive was born.

Karma hasn’t had the smoothest of resurrections. The company’s first effort, known as the Revero, wasn’t received warmly. The Revero GT has been an improved effort. However, that hasn’t relieved the pressure.

The company laid off about 200 workers this month from its Irvine, Calif. headquarters following a restructuring that will focus on licensing its technology to other carmakers. The company’s assembly plant is in Moreno Valley, Calif.

This new incubator effort is an effort to bring some stability to the company and help it offset the capitally intensive business of designing and producing its own cars.