Karma Automotive’s second act is a gasoline-electric luxury vehicle that aims to deliver more performance and tech inside a sleek and sporty $149,950 package.

The 2020 Revero GTS unveiled Tuesday during AutoMobility LA, the press and trade days of LA Auto Show, shares some of the same bits as its sibling Revero GT. Both vehicles use a gasoline-electric powertrain — a BMW engine powers a generator that charges the 28 kilowatt-hour nickel manganese cobalt lithium-ion battery. Like the GT, the battery supplies the GTS with 80 miles of electric driving. Both vehicles have a total 360-mile range when they’re fully charged and fueled with gas.

And both have some of the same operational features, including three driving modes and launch control that allows drivers to unlock all the power and torque inside and “launch” the vehicle down the road. The three drive modes are “stealth,” for pure-electric driving, a range extender mode called “sustain,” and sport, which combines the output from the battery pack and the generator for maximum driving performance.

The GTS does have a lot of extra though and costs about $15,000 more than the GT. The GTS has a new body, including a redesigned hood, doors, deck lid, body sides and side mirrors. It’s also faster off the line and can travel from 0 to 60 miles per hour in an estimated 3.9 seconds compared to the 4.5 seconds in the GT. The GTS comes with electronic torque vectoring, refined power steering. It also has a higher electronically-limited top speed of 130 miles per hour versus the GT’s 125 mph.

The GTS’ twin electric motors and all-electric powertrain produce 536 horsepower and 635 pound-feet of torque, which should deliver a responsive and exciting enough drive. Although we’ll have to wait and experience it for ourselves. 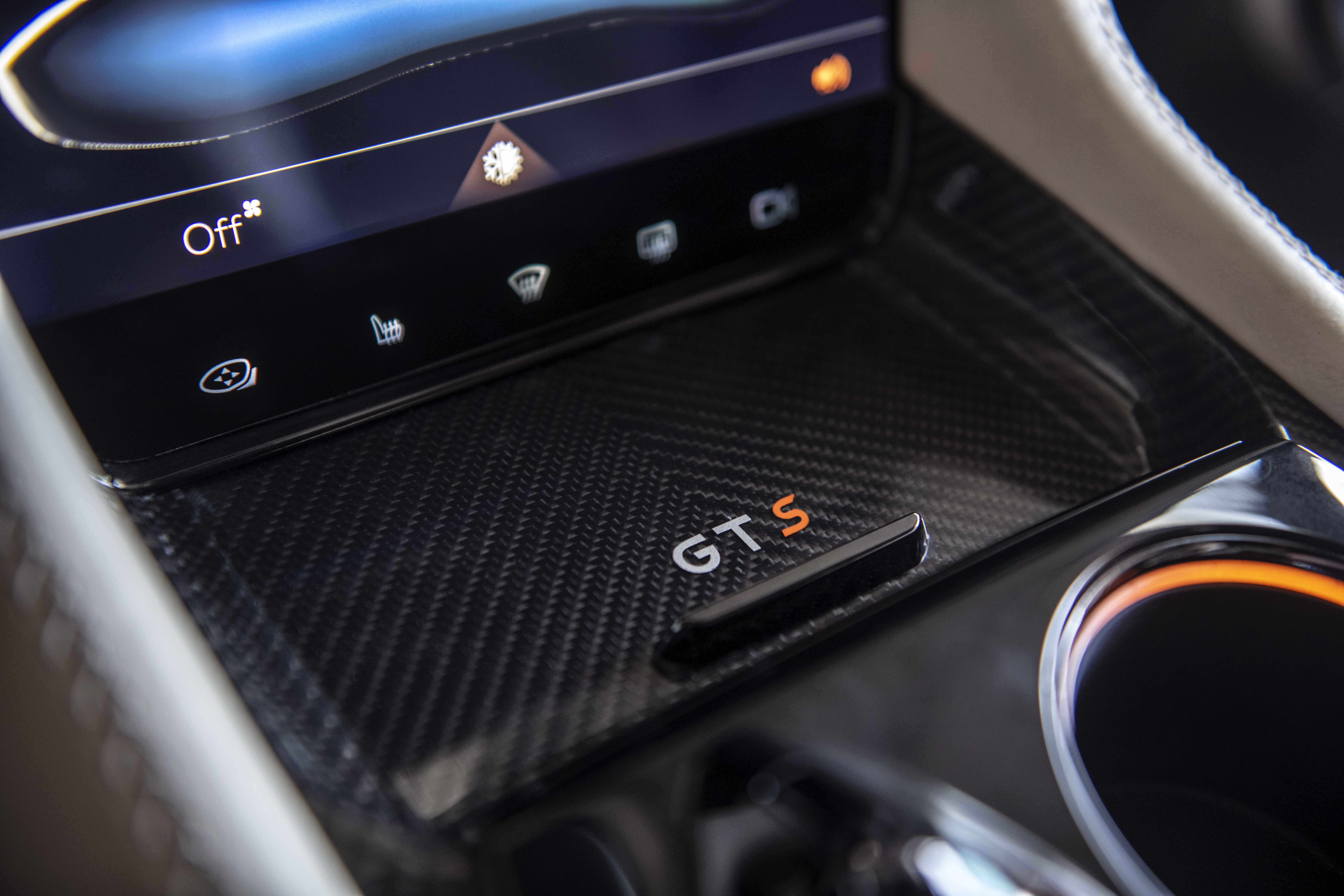 The new vehicle has advanced driver assistance features like blind spot and cross traffic detection as well as audio technology developed in house and active noise cancelling. The infotainment system has also been improved on the GTS and includes haptic tactile switches a new touchscreen and user interface processor as well as a center console with improved storage.

Karma Automotive says it will begin production of the GTS in first quarter of 2020. First deliveries of the Revero GT expected during the fourth quarter of 2019.

The Karma Revero GT was the first fully conceived product to come out of a company that launched from the remnants of Fisker Automotive, the startup led by Henrik Fisker that ended in bankruptcy in 2013. China’s Wanxiang Group purchased what was left of Fisker in 2014 and Karma Automotive was born.

It hasn’t been all smooth sailing though. The company’s first effort, known as the Revero, wasn’t received warmly. The Revero GT has been an improved effort. However, that hasn’t relieved the pressure.

The company laid off about 200 workers this month from its Irvine, Calif. headquarters following a restructuring that will focus on licensing its technology to other carmakers. The company’s assembly plant is in Moreno Valley, Calif.

Karma’s efforts to pack more tech and performance in the GTS makes sense considering the company’s new business strategy to open its engineering, design, customization and manufacturing resources to other companies. It also explains Karma’s other reveal Tuesday, an all-electric concept vehicle called the SC2 that delivers a stunning 1,100 horsepower and 10,500 lb.-ft. of torque and can achieve 0 to 60 mph in less than 1.9 seconds.

In other words, the GTS is a model of what Karma can do. And it explains some of Karma’s decisions to design and produce more of the vehicle’s components in house. Karma has developed its own inverters to maximize and maintain full software control for fast over-the-air updates as well as a proprietary 7.1-channel 570-watt Soloscape audio system, according to Todd George, the company’s VP of Engineering. The inverters convert DC current from the battery  pack to power the AC drive motors, and to also capture AC power from the regenerative braking system to recharge the battery pack.

It’s a business angle that Karma hopes will give it the immediate and long-term capital it needs to stay afloat. Karma is backed and owned by Wanxiang, the massive Chinese auto parts supplier. But it will eventually need to stand on its own.