Cyan Banister is an American success story. A homeless teenager who originally supported herself by making hemp necklaces, then silk-screen T-shirts, she went on to become a self-taught engineer and to later hold several management roles at the security startup IronPort. It was a life-changing experience for her. She made an early fortune when it sold to Cisco for $830 million in 2007. She also met her husband, Scott Banister, who co-founded the company, and the two together and separately began writing seed-stage checks, including to SpaceX, Uber and a long list of companies that are now household names.

When seed-stage valuations began soaring to levels that gave them both pause, they hit the brakes, and Banister, a self-described workaholic, headed over to AngelList as an “ev-angel-list” to help recruit people like herself to its platform. Soon after, Peter Thiel’s Founders Fund reached out to her and invited her to become a partner.

In a wide-ranging conversation at a San Francisco event on Wednesday, we talked with Banister about that path, along with her investing style, which still sees her make angel investments of $1.5 million or less in companies that are often ambitiously futuristic or boringly practical and very much needed. (She kidded that they balance out one another.)

We also chatted about Founders Fund, which has changed considerably since its 2005 founding yet maintained its reputation as a top fund — and we discussed why she thinks many of its original partners no longer live in San Francisco.

Among the things we learned: that Founders Fund doesn’t have Monday morning partner meetings, as do many firms. It doesn’t even have weekly meetings, with Banister instead describing a highly decentralized operation. “We have very few meetings, actually,” she said. “We have a brunch every two or three weeks that’s an hour, hour-and-a-half long. We submit the agenda over Slack; sometimes, we have nothing to talk about and it’s very short. You literally get a plate of food, talk about the one or two items, and you’re done.”

Founders Fund also has quarterly off-sites, typically at a partner’s house, and these are “all day affairs,” she said, adding that the team “doesn’t talk about specific deals. We talk about the future, about what’s exciting to all of us, what our different strategies might be.”

As for how decisions get made, Banister explained that the voting structure is dependent on the size of the check. “So you’d meet with one or two or three or four partners, depending on your [investing] stage,” she told attendees. Because she’s looking at very early-stage startups, for example, she doesn’t have to meet with many people to make a decision. As “dollar amounts gets larger,” she continued, “you’re looking at full GP oversight,” including the involvement of senior members like Brian Singerman and Keith Rabois, and “that can a little more difficult.”

Asked how involved Thiel himself is in these decisions, Banister said that there’s a certain threshold above which he is always involved. Pressed on what that number is, Banister smiled, adding, “Let’s just say it’s a lot.” 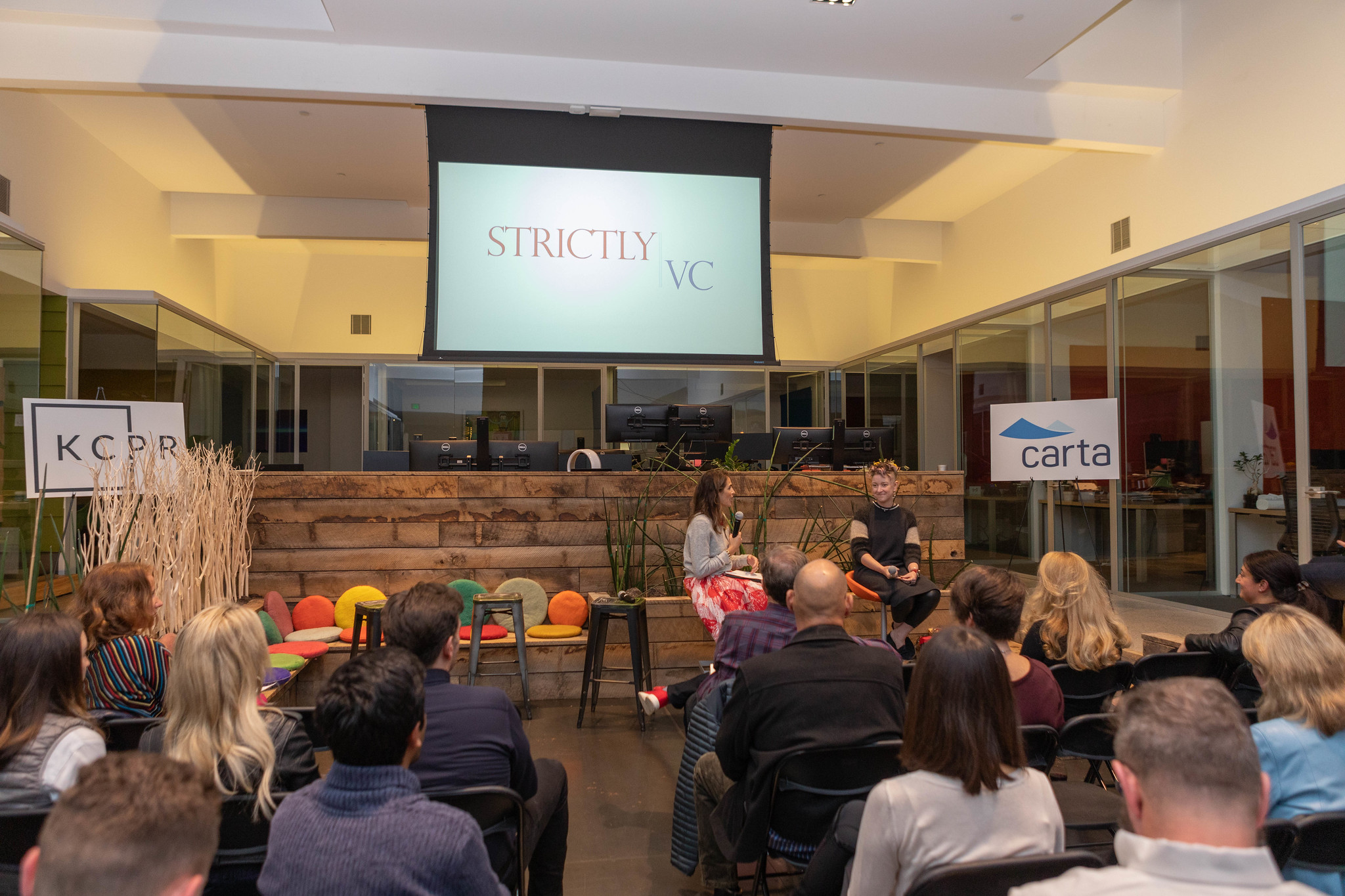 Pointing to the other senior members of the team, she offered that the partnership doesn’t “need Peter’s advice all the time, but there’s a certain point where he has to get involved and meet the founders. Ideally, it’s a company that we brought in at its early stages and has grown with us and he has already developed a relationship with [its founders]. We also do an off-site once a year, which is a great opportunity for him” to see everyone involved in the firm’s portfolio. “But he’s pretty involved,” she said. “He comes to these brunches and [quarterly] off-sites. We see him more now [since he called it quits in San Francisco and moved to LA] than we did when he lived next door because he’s stuck. If he comes to San Francisco, where’s he going to go? He has to stay in his office,” she joked.

Banister declined to confirm or comment on a recent WSJ report that Founders Fund is in the process of closing on $3 billion in capital commitments across two funds — a flagship fund and an opportunity type of fund to support its companies as they remain private ever longer.

But before we let her go, we asked Banister about turnover at the firm. Specifically, we noted, while Founders Fund was formed by Thiel, along with co-founders Ken Howery, Luke Nosek and Sean Parker, Howery is now the U.S. ambassador to Sweden, Nosek runs a separate fund in Austin called Gigafund and Parker is off doing a variety of other things, many of them also in LA.

She explained that everyone is encouraged to do what they want. For instance, she said, “Ken was encouraged to pursue his political aspirations; that’s something he has always wanted to do.”

But she also acknowledged that San Francisco itself might be a common thread. “It’s too expensive here. That’s the problem. We need to build more housing. We can’t afford people to even serve us in this town, they come in from other cities, they can’t even live here. And that’s a huge problem when you’re investing and your thesis is to invest only in Silicon Valley and the surrounding area.” In fact, Founders Fund is “already starting to look elsewhere [for startups], including in the Midwest,” she said.

As for whether San Francisco is doing enough for founders — or founders enough for San Francisco — Banister suggested both are coming up far short, saying of the city that “it should be the most technologically advanced” in the world. “There’s no reason we shouldn’t be like Tokyo . . . when we gave birth to Airbnb and Uber, and yet our city looks the way it does and operates the way it does and it’s a disaster.”

Tech founders and employees are in a particularly “weird situation” where on the one side a “large part of this city hates technology and hates all of us,” and on the other are people like Salesforce founder Marc Benioff who are funneling money into the city but whose efforts don’t appear to her to be making a difference. “I’ve yet to see a dent” in homelessness, she said as an example. In the meantime, “crime is going up and we now have a district attorney who won’t prosecute crimes that have to do with any sort of quality-of-life [issue]. [San Francisco is] going to start something instead where if your [car] window is broken, they’ll replace it with some kind of window Uber app at a discounted rate.”

The crowd laughed. Some attendees thought she was joking about the window replacement service. She wasn’t. “This is a really bad direction [we’re headed in],” she said. “We need diversity of thinking here, and we don’t have it on the political level, and we all need to get more involved.”