Tesla gained ground and moved up four spots in the latest Annual Auto Reliability Survey from Consumer Reports, thanks largely to improvements with the Model 3.

Reliability has improved in the Model 3 and Model S enough that Consumer Reports can now recommend the two models.

Consumer Reports announced Thursday the results of its Annual Auto Reliability Survey, which is based on data collected from the organization’s members about their experiences with more than 400,000 vehicles. The survey covers more than 300 models.

CR does not recommend the Model X. The Model X continues to rank among the least reliable models in the survey.

The reversal is good news for Tesla. In February, Consumer Reports said it could no longer recommend the Model 3 because issues with the paint, trim and body hardware raised reliability questions.

Lexus took the top spot, followed by Mazda, Toyota, Porsche and Genesis. Tesla is still ranked in the bottom third of the survey. It now is ranked 23 out of 30 brands reviewed in the annual survey.

“The Tesla Model 3 struggled last year as the company made frequent design changes and ramped up production to meet demand,” Jake Fisher, senior director of auto testing at CR, said in a statement. “But as the production stabilized, we have seen improvements to the reliability of the Model 3 and S that now allow us to recommend both models.”

While Tesla has improved, Fisher said he expects Tesla’s reliability rankings will fluctuate, given its track record to date.

Cadillac came in last place. Audi, Acura and Volkswagen are among the brands that saw sharp drops, following the introduction of troublesome redesigned vehicles. Volkswagen, which is ranked 27th, dropped nine spots from last year due to reliability issues with the Atlas and Tiguan. The Consumer Reports survey noted that the two SUVs had problems with power equipment, in-car electronics and the emissions/fuel system. 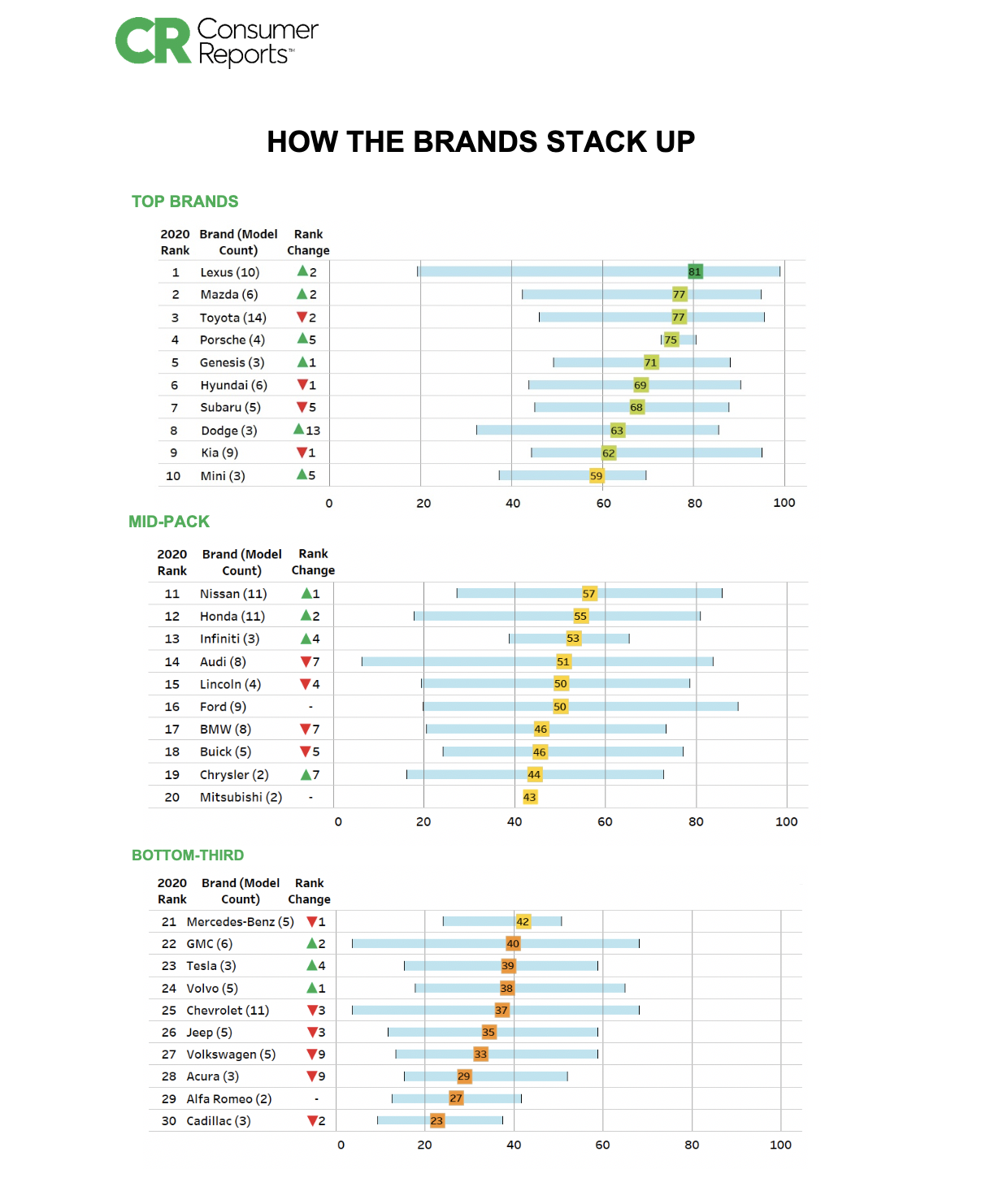 Dodge posted one of the most improved reliability scores in the annual survey, gaining 13 places to round out the top 10 after years as a lower-ranked brand.

Audi also fell seven spots in its ranking. CR said the number of new or redesigned 2019 models that shared similar powertrains and the new infotainment system caused the fall in ranking. The A6 and Q8 had well-below-average reliability, CR said.