As Slack has grown in popularity, one of the company’s key differentiators has been the ability to integrate with other enterprise tools. But as customers use Slack as a central work hub, it has created its own set of problems. In particular, users have trouble understanding which apps they have access to and how to make best use of them. Slack announced several ways to ease those issues at its Spec developer conference today.

Andy Pflaum, director of Slack platform, points out there are 1,800 app integrations available out of the box in Slack, and developers have created 500,000 additional custom apps. That’s obviously far too many for any user to keep track of, so Slack has created a home page for apps. Called App Launcher, it acts a bit like the Mac Launchpad — a centralized place where you can see your installed apps. 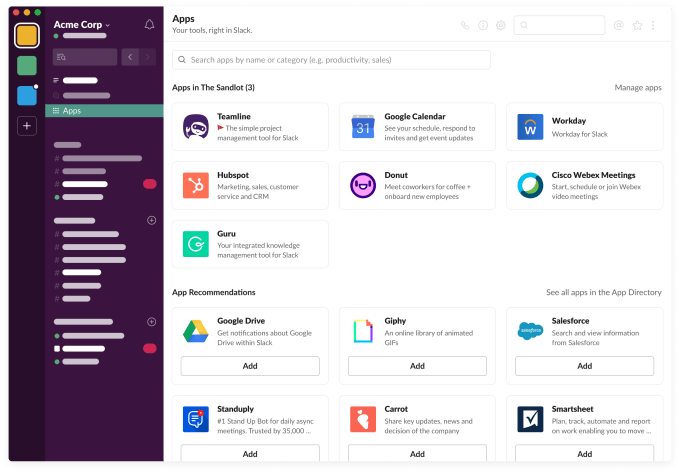 You access App Launcher from the Slack sidebar by clicking Apps. It opens App Launcher with the apps that make sense for you. When you select an app, Pflaum says it takes you to that app’s home screen where it will be ready to enter or display relevant information.

For example, if you selected Google Calendar, you would see your daily schedule along with meeting requests, which you can accept or reject. You also can launch meeting software directly from this page. All of this happens within Slack, without having to change focus. App Home will be available in beta in the next few months, according to Pflaum.

Another way Slack is helping ease the app burden is with a new concept called Actions from Anywhere. The company actually launched Actions last year, enabling users to take an action from a message like attaching a Slack message to a pull request in Jira, as an example. Pflaum said that people liked these actions so much they were requesting the ability to take actions from anywhere in Slack.

“At Spec, we are previewing this new kind of action — Actions from Anywhere — which gives users the ability to take an action from anywhere they are in Slack,” Pflaum said. To really take advantage of this capability, the company is adding a feature to select the five most recent actions from a quick-access menu. These actions fill in automatically based on your most recent activities, and could be a real time-saver for people working inside Slack all day.

Finally, the company is enabling developers to open an external window inside Slack, what they call Modal windows, which open when users have to fill out a form, take a survey, enter expenses or provide additional information outside the flow of Slack itself.

All of these and other announcements at Spec are part of the maturation process of Slack as it moves to solve some of the pain points of growing so quickly. When you grow past the point of understanding what a complex piece of software can do, it’s up to the vendor to provide ways to surface all of the benefits and features, and that’s what Slack is attempting to do with these new tools.