LabGenius, a London-based startup applying AI and “robotic automation” to protein drug discovery, has raised $10 million in Series A funding.

“My central thesis, the thing that’s really the driving force behind the company, is the conviction that we’re entering an age in which humans will no longer be the sole agents of innovation. Instead, new knowledge, technologies and sophisticated real-world products will be invented by smart robotic platforms called empirical computation engines. An empirical computation engine is an artificial system capable of recursively and intelligently searching a solution space.”

LabGenius’ flagship technology is called “EVA,” which Field describes as a “machine learning-driven, robotic platform” capable of evolving new proteins. “As a smart robotic platform, EVA is capable of designing, conducting and critically learning from its own experiments,” he says.

The goal: to discover and develop new protein therapeutics that are currently hard for humans alone to find. 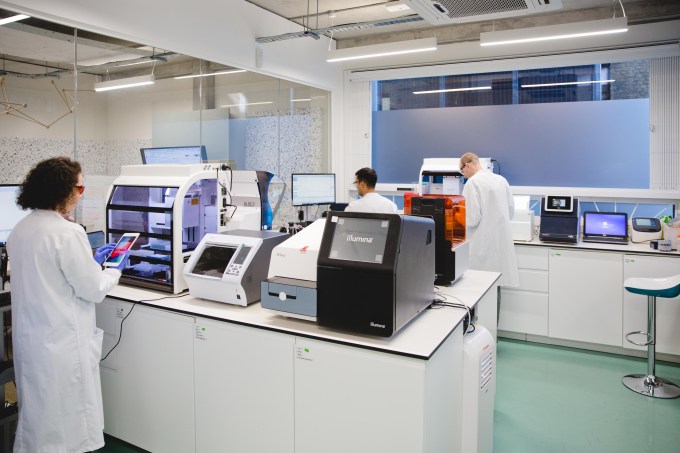 “For protein engineers, that dream has now entered the realm of possibility. The rapid pace of technological development across the fields of synthetic biology, robotic automation and ML has given us access to all the essential ingredients required to create a smart robotic platform capable of intelligently discovering novel therapeutic proteins.”

To that end, Field frames the development of EVA as a “long-term, ambitious undertaking” that he says will enable the startup to address previously unsolvable protein engineering challenges and in doing so, develop urgently needed therapeutics.

“My ultimate goal for LabGenius is to establish a fully integrated biopharmaceutical company powered by the world’s most advanced protein engineering platform,” he adds. “Quite honestly, this is a gargantuan undertaking and, while we’ve already established one of the world’s most technically sophisticated protein engineering operations, we’re only just scratching the surface of what’s possible.”

More broadly, there is a tension that many deep tech companies face, which is determining how best to develop technology that’s tightly aligned to real-world commercial needs (before running out of capital!). “For LabGenius, we’ve achieved this in a highly intentional way by undertaking a series of commercial projects of increasing complexity from the company’s earliest days,” Field says.

One on-going project is with Tillotts Pharma AG to identify and develop new drug candidates for the treatment of inflammatory bowel disease (IBD).

“Our business model is pretty simple,” says the LabGenius founder. “We use EVA to discover and characterise new drug molecules and then partner with pharma companies who can take these molecules to market. For example in a typical partner-financed early discovery program, we’ll take a project from concept to early pre-clinical stage. Typical deal structures include a blend of R&D payments, milestones & royalties.”

Meanwhile, LabGenius will use the capital to scale its team, expand the scope of its discovery platform and initiate an “internal asset development program.” The next goal is to evolve novel antibody fragments capable of treating conditions that cannot be addressed using conventional antibody formats.