Leading the round is London-base VC firm Atomico, with participation by Intel Capital, Global Brain and btov Partners. All previous investors, including Balderton Capital, Amadeus Capital Partners and Jonathan Milner, also followed on.

Healx says the new financing will be used to develop the company’s “therapeutic pipeline” and to launch its global Rare Treatment Accelerator programme, which will partner with patient groups in an attempt to make rare disease drug discovery much more efficient.

More broadly, the aim is to discover new treatments and move them toward clinic “within 24 months,” which is significantly faster than the status quo. Meanwhile, many rare conditions aren’t currently the focus of new treatments at all.

“There are over 7,000 rare diseases affecting 400 million people worldwide (50% of these are children). Of these diseases, 95% still lack an approved treatment today,” Healx co-founder and CEO Dr. Tim Guilliams tells TechCrunch.

“The traditional model of discovery and clinical development of new medicines is very expensive in terms of costs, timelines and efficacy. To bring a new drug to market typically costs $2-3 billion, takes 12-14 years to develop and has a 95% failure rate.”

Specifically, Guilliams says that the current model doesn’t work for diseases which have a small patient population, as the return on investment from drug sales simply won’t work with the discovery and development costs being so high. What’s needed is a “radical change of course” by using AI to discover alternative uses for existing drugs.

“By focusing on approved drugs and harnessing the power of AI we’ve been able to make the rare disease drug discovery process a faster and more efficient one,” he claims. “We’ve since made it our mission to progress 100 rare disease treatments towards the clinic by 2025.”

Of course, applying AI technology to drug discovery isn’t unique to Healx and nor are the challenges in doing so. BenevolentAI, for example, has grabbed lots of headlines, most recently reportedly having its valuation cut. However, Guilliams says Healx is taking a different approach than other companies in the space, which also includes Recursion Pharmaceuticals and Insilico Medicine.

“Our focus and approach is quite different. We focus on rare genetic diseases and have the world’s leading biomedical knowledge graph for rare diseases… [and] we don’t develop new molecules, we maximise the value of already-approved drugs.”

In addition, Guilliams says that Healx’s technology is data-driven and “hypothesis-free,” which is very different from traditional target-based drug discovery. “We are able to predict drug combinations and translate them very fast in the clinic… [and] we work extremely closely with patient groups, as strategic partners and disease experts,” he adds.

It’s also worth mentioning that Healx co-founder Dr. David Brown has invented several drugs that have made it to market (including being one of Viagra’s inventors). These have turned over $40 billion in revenue, apparently. “We know how to do this,” says Guilliams.

Healx claims to have validated its innovative model with the FRAXA Research Foundation. “Fragile X syndrome” is the leading genetic cause of autism and I’m told there are currently no approved treatments for the disease. That could be about to change with Healx and FRAXA set to soon launch early clinical trials to test multiple treatment combinations. Further clinical programmes for other rare diseases will begin later in 2020. 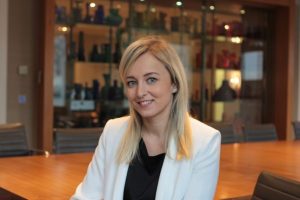 Meanwhile, I asked Atomico principle Irina Haivas, who led on behalf of the firm, what attracted her to the investment and how she views the risks associated with backing a company like Healx, given it is trying to find a needle in a haystack (drug discovery) and also needs to commercialise those discoveries. In other words, there are a lot of unknowns and a very long time to market.

“One of the reasons I chose to join Atomico is precisely because they are not afraid to make these sorts of bold, long-term bets knowing that if it works then Healx will dramatically improve the lives of 400 million people living with a rare disease,” she tells me.

“Obviously, such ambitious bets also come with a certain degree of risk, but I would say that in the case of Healx all the early signs are there that we can use AI to solve this ‘big search’ problem better than humans traditionally did. However, the ultimate proof will be getting treatment to market, of course.”

With that said, she also cautions that startups like Healx are creating a new category of companies. That’s because they are neither traditional tech nor traditional biopharma.

“They will need a different framework from an investor perspective; some investors will take time to get comfortable with that,” adds the surgeon-turned-VC.