For years now, Apple’s been judicious with its MacOS updates. Understandably so. Given the massive online outcry every time Facebook changes the placement of a button, it’s in UX designers’ best interest to keep changes gradual and subtle. These days, the overarching philosophy of operating system design seems to be more about guiding the user’s hand and making pronounced changes over time.

By the standard of annual consumer electronic upgrades that Apple has played a key role in perpetuating, updates to MacOS have, perhaps, been too subtle to foster the same sort of excitement. And honestly, that’s perfectly fine. If a laptop is a flashy new car, the operating system is the great steering wheel that doesn’t whiff out the window while you’re driving.

Catalina bucks the trend of recent MacOS updates a bit, in that the updates feel more pronounced. While it’s true that the underlying principles are the same, there are some fundamental changes to day-to-day applications that both impact current use and lay the groundwork for future evolutions of the desktop operating system.

The most pronounced change is the much ballyhooed death of iTunes. The name will continue to exist in some residual instances, but for most intents and purposes, iTunes is being laid to rest with Catalina. Eighteen years was a pretty good run, of course, and signs of the once mighty music application will very much live on in Apple Music. But the new operating system finds the company very much planting its flag with premium content plays, the undisputed future of Apple’s massive revenue generating machine.

That extends, of course, to the arrival of an upgraded TV app, which sets the stage for TV+ and Arcade, which also gets a handful of new arrivals to celebrate today’s public release of Catalina. Podcasts also gets its own desktop app, but for now, at least, that’s not a direct revenue source for the company. It is, however, important for the company to lay claim to the rapidly mainstreaming medium to which it indirectly gave name.

The arrival of Catalyst, meanwhile, lays the seeds for the future of Mac apps. Following the arrival of Apple’s own News, Stocks, Voice Memos and Home, the company has opened the program up to all iPad developers to easily port their apps to the desktop. In a broader sense, the move continues to blur the lines between the two operating systems, for better and worse. For Apple, however, the decision is much more pragmatic: Mac software development has stalled as iOS has boomed. This is a simple solution to help keep thing this in check.

Accessibility gets some much welcome updates, too, including much improved Voice Control, while Apple continues to add updates on the security side.

For the sake of this writeup, however, I’m going to start with the bit that gets me the most excited: Sidecar. From my own perspective, Apple tends to bury the lede in its own feature set. Though I completely understand that it’s simply not as universal an application as, say, Music, TV or (likely) Arcade. Maybe it’s because I’m just getting back from yet another work trip (we held a little event in San Francisco), but Sidecar is a legit productivity game changer for me.

Against all recommendations, I opted to run a beta of Catalina on my primary work machine. I know, I know, but when a beta drops while you’re on the road, there’s really no other option. I had some issues with the software I won’t go into here, because betas gonna beta. I surprisingly had some issues getting the feature to work again with the latest version of iPadOs and the GM of Catalina, but everything should be smooth sailing by the final release.

There’s no doubt, of course, that this is the latest bit of Sherlocking — Apple integrating its own version of a popular third-party app into the operating system. But with something like this, there’s really no competing with native support for most users. For those who need fair more nuanced use of things like Apple Pencil for, say, art making, Duet and Luna may still be worth checking out. If, like me, you just want to use the iPad as a second screen for some added real estate on the road, Sidecar’s the thing.

Enabling the feature is as simple as signing into all of your accounts: Make sure all of the relevant wireless protocols are turned on and then select the associated device from the drop-down. Your primary desktop can either be mirrored or used as an extension like a standard external monitor. The primary benefit of mirroring seems to be the ability to essentially use the screen as a touchscreen and iPad input. This should prove appealing for artists and a potential alternative to a pro tablet like the kind Wacom makes. 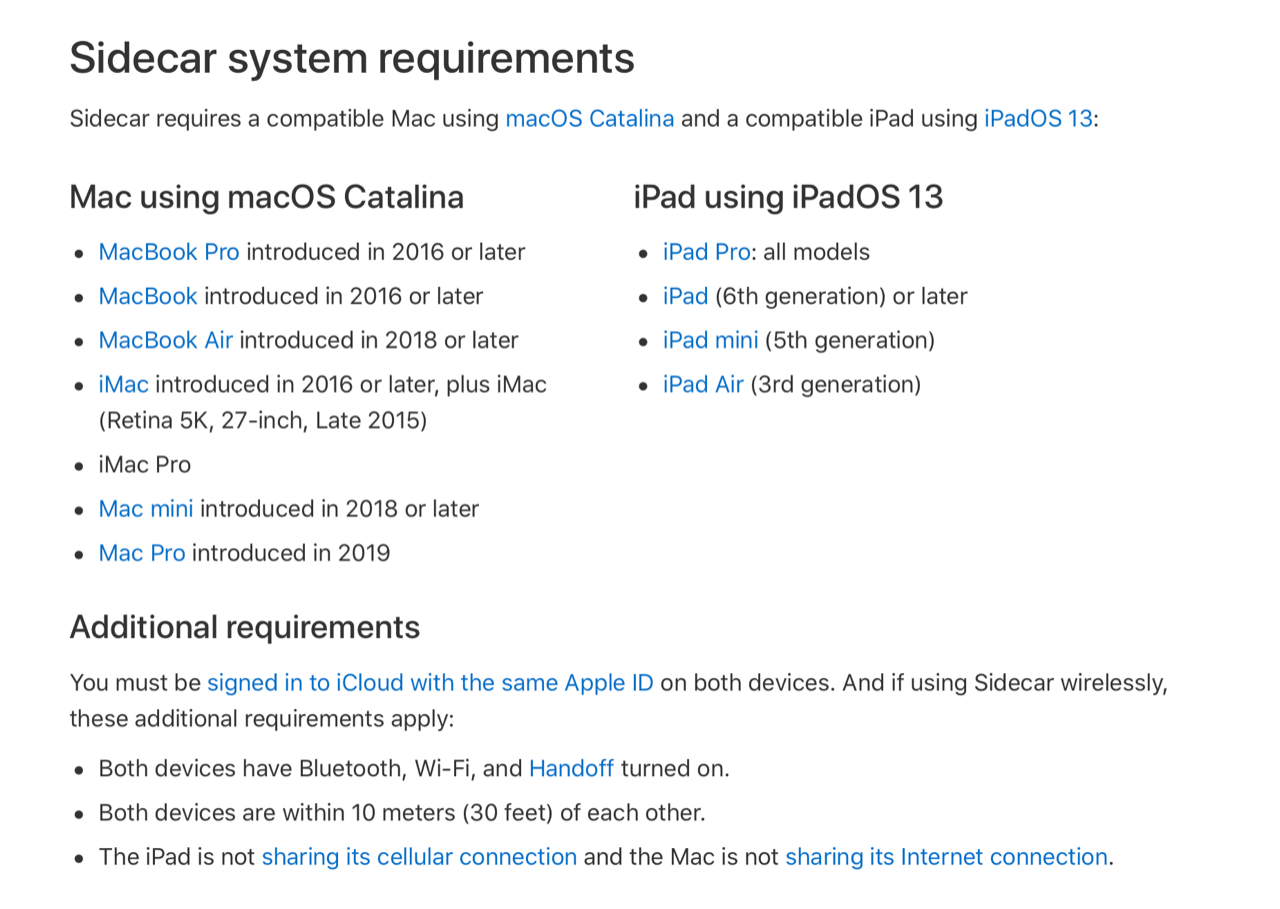 For me, the second display is the thing. Hooking up the extending real estate is a big sigh of relief, making it far easier to keep multiple windows open at the same time. Having Slack open on the iPad while I use Pages and Chrome on the main desktop is a pretty significant time saver.

A small quibble: Keeping the Sidecar and display settings separate is a bit of an annoyance. The side I ultimately use for the iPad usually comes down to where I’m sitting. It would be great to be able to swap on the fly. The addition of a virtual sidebar, meanwhile, is an interesting one, but pretty redundant in mirrored mode.

All told, however, Sidecar is far and away the best addition to MacOS in recent memory.

I’m less in love with the loss of iTunes. I totally understand why Apple made the switch, and honestly, I’m a bit surprised it took them this long. I’m a long-time Spotify user with no interest in making the jump to Apple Music. I prefer the device flexibility Spotify affords. Among other things, the move to Music feels like an opportunity to constantly push users to “Try it Free.”

Music can still be used to play a locally stored song, but the move to streaming service has weaned me off of the notion of digital music ownership. Somewhere in my apartment, there’s a dusty old hard drive with hundreds of gigs of music, including weird old stuff that no one bothered to obscure the distribution rights for. Perhaps one day I’ll dive back in, but honestly it’s feeling increasingly less likely. 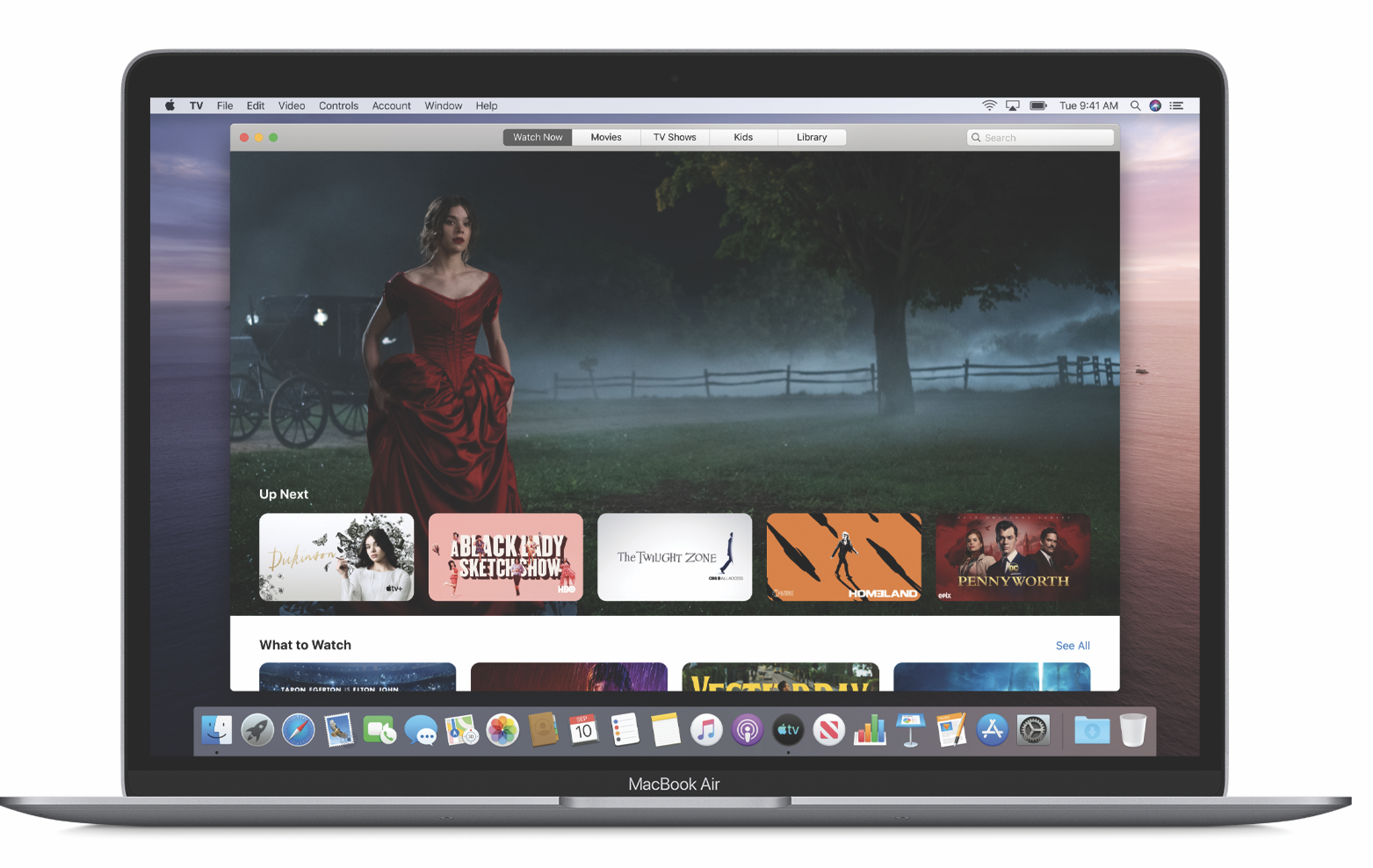 The principles of Podcast should be familiar to anyone who’s ever used the mobile app. It’s all pretty simple and, like Music, focused on discovery. Separating it from Apple Music seems to imply that the company doesn’t have much interest in making huge Spotify-esque investments in the category. And for now, at least, why bother? Apple has a pretty massive head start in the space.

Apple TV gets a nice refresh, as well. It, too, is focused on discovery. Even more importantly for Apple’s long game, however, it lays the groundwork from TV+, which is set to arrive next month. Premium channels like HBO, Showtime and Starz have been integrated here, in a bid to become a more robust cable replacement for cord cutters. Also nice is the arrival of a dedicated Kids section with curated all ages content.

Arcade certainly isn’t what people are referring to when discussing the Mac’s long journey to becoming a more serious gaming system. And while the titles are largely designed to be played on mobile devices, those subscribing at $5 a month will no doubt welcome the ability to play on the desktop. There’s a lot to be said for the ability to take a quick work break with a round of the excellent Zelda knockoff/homage, Oceanhorn 2.

Photos adopts some key features from its mobile counterpart. AI/ML will determine and highlight your best shots, while images are categorized by days/months/years. Photo previews are large and now include live photo and video playback.

On the more pragmatic side of things, syncing and backup get some nice upgrades, now available outside of iTunes. That’s a change that certainly makes sense, with those features now accessible through the Finder. Honestly, that’s where they belong. Accessing them through iTunes always felt like a relic of the early iTunes/iPod days. This information is available directly in the main Finder sidebar.

As ever, there’s no hesitation in recommending Mac users update to the latest version of the operating system. Of course, that’s helped along by the fact that it’s a free upgrade. This is one of the more transformative MacOS updates in recent memory, and most of the new features are welcome — as I said, I’m not in love with Music for personal workflow reasons, but Sidecar is a biggie.

MacOS Catalina is now available for all users.