Users should be able to Twitter as normal now or very shortly, per an update sent via its support account. It suggests anyone still experiencing problems should “give it a a few more minutes”, as well as thanking users for their patience.

The issue is just about fixed. You should be able to access Twitter as usual. If not, give it a few more minutes! Thanks for waiting.

In an update on its status page the history section now records the issue — categorizing it as a “partial service disruption”.

Per this page Twitter only began investigating the outage at 8:23AM UTC although its support account tweeted that the company was working on a fix several hours earlier. 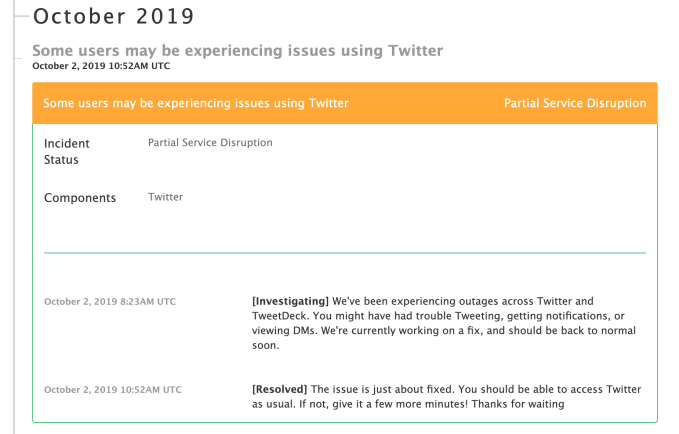 Our original report on the service issues follows below…

It’s not just you, Twitter has gone wobbly again. Users of the social network in Asia and Europe are reporting a range of problems tweeting and viewing certain types of content this morning.

Among the problems being reported are not being able to post certain types of content to the site (such as polls and media), though at least some users are still able to post text tweets saying they’re having problems.

Other users aren’t seeing latest replies to their tweets. In my case I’m unable to view latest replies on Twitter’s desktop product but can see them on an (older) version of Twitter’s iOS app.

Some Twitter users are also reporting problems posting to Android. Trending topics also appears to be down.

A Twitter spokeswoman confirmed to TechCrunch it’s having problems — pointing us to a tweet from @TwitterSupport where the company says it’s experiencing outages across both Twitter and its alternative client, TweekDeck.

The problem is also affecting being able to view DMs, per the tweet.

“We’re currently working on a fix, and should be back to normal soon,” Twitter adds, without providing detail about the cause of the issues.

We've been experiencing outages across Twitter and TweetDeck. You might have had trouble Tweeting, getting notifications, or viewing DMs. We're currently working on a fix, and should be back to normal soon.

The flakey service comes a few months after a major outage for Twitter.

Back in July Twitter’s service went down for a full hour. In that case an “internal configuration change” caused the issue — which Twitter subsequently rolled back.

It also suffered problems with direct messages in the same month.

Coincidentally or not, the company rolled out a major redesign of its desktop product this summer.

Twitter’s new ‘Facebook-style’ look has not been universally popular, to put it politely. Whether the redesign is the root cause of the recent bout of service flakiness remains to be seen.

Twitter’s status page sheds zero light on the matter — currently reporting that “all systems are operational” when that’s patently not the case.

We’ll update this report with any further details on the problems from Twitter.