In October of 2018, Y Combinator published a mega list of the top 101 companies to have gone through the accelerator, as sorted by each company’s valuation.

Valuation as a ranking metric has its faults, of course. It’s a measurement largely of perception; a projection of a company’s perceived potential, rather than a direct indication of how much a company is actually making at a given moment. When publishing last year’s list, YC openly admitted that “valuation is a poor way to measure a company’s value in the short term.”

But it still provides some rather interesting insights into which of YC’s 2,000+ investments have grown the most, which have held strong over time and which sectors perform the best. YC says that all of the companies that made this year’s list are each currently valued at $150 million or more, with a cumulative valuation of $155 billion.

While the top 10 companies remain largely the same from 2018, a few of them have danced around a bit, while others have disappeared entirely. Airbnb was No. 1 last year, while Stripe was No. 2; in 2019, they’ve swapped places. Machine Zone, creators of the once wildly popular mobile game Game of War and the No. 7 company in 2018, doesn’t appear on the list at all — nor does last year’s No. 9, Zenefits. YC notes that this list isn’t necessarily exhaustive, as they “allowed alumni to opt out of being listed for any reason.”

Most of the companies on the list are at least 4 or 5 years old, which makes sense — it’s pretty uncommon for companies to hit massive, record-breaking valuations right out of the gate. There are, of course, exceptions: Grin, a Latin American scooter rental company that sits at No. 27 on this year’s list, just went through YC in Summer of 2018. Atrium, the tech-driven startup law firm founded by Twitch co-founder Justin Kan, sits at No. 83 and was part of the Winter 2018 class. ZeroDown, a company that aims to help people buy homes without a down payment, squeezed onto the list at No. 101 after launching just months ago.

The Summer 2016 batch, meanwhile, has more appearances on the list than any other group, with the one class alone accounting for 10% of the list. The oldest company on the list is Reddit, which was part of YC’s Summer 2005 class, at number 13.

Sorted by sector, B2B Software/Services just absolutely dominates YC’s Top 101, accounting for 52% of the list. The next closest sector is fintech at 15%, followed closely by consumer goods/services at 11%. 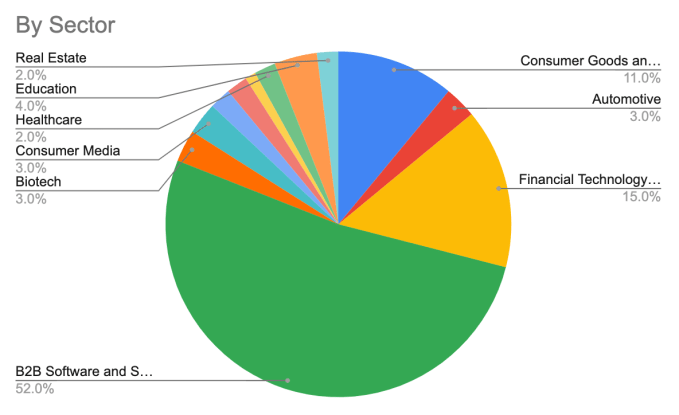 The vast majority (71%) of the list calls the Bay Area home, with 63% of the Top 101 companies hosting their headquarters in San Francisco. Four companies on the list, meanwhile, call no one physical place home — GitLab, Zapier, Mattermost and SFOX all consider themselves primarily remote.