WhatsApp users may soon get the ability to have their messages self-destruct after a set period of time. That’s according to a highly reliable tipster who spotted the feature combing through the code of a beta version of the app.

Twitter user WABetaInfo said on Tuesday that the recently released public beta of WhatsApp for Android — dubbed v2.19.275 — includes an optional feature that would allow users to set their messages to self-destruct.

The ability to have messages disappear forever after a fixed amount of time could come in handy to users who share sensitive information with friends and colleagues on the app. It’s one of the most popular features on instant messaging client Telegram, for instance. 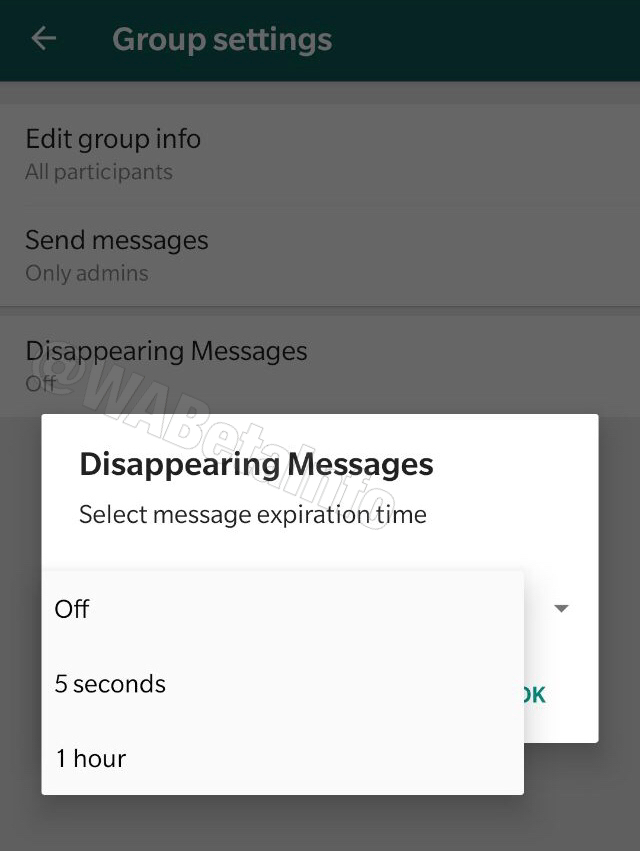 Telegram offers a “secret chat” feature wherein users can engage with each other and their messages disappear from their devices after a set amount of time. The messaging platform says it does not store the text on its servers and restricts users from forwarding the messages or taking a screenshot of the conversation, to ensure there is “no trail” of the texts.

“All secret chats in Telegram are device-specific and are not part of the Telegram cloud. This means you can only access messages in a secret chat from their device of origin. They are safe for as long as your device is safe in your pocket,” it explains.

Facebook, which owns WhatsApp, also offers a “secret chat” feature on its Messenger app. But there, the secret chat feature only encrypts end-to-end messages and media content shared between two users. On WhatsApp, messages between users are end-to-end encrypted by default.

Currently, WhatsApp is testing the feature in a group setting that supports participation from multiple individuals. Messages could be set to self-destruct as soon as five seconds after they have been sent and as late as an hour. Additionally, an image shared by WABetaInfo shows that group administrators will have the ability to prevent other participants in the group from texting.

Some third-party WhatsApp apps have allowed a self-destructing messages feature in the past. But in recent years, WhatsApp has started to crack down on third-party services to ensure safety of its users. WhatsApp is used by more than 1.5 billion users each month.

It remains unclear how soon — if ever — WhatsApp plans to roll out this feature to all its users. We have reached out to them for comment.