Only about 10% of India’s 1.3 billion people know English. Yet, that is the only language Amazon’s digital assistant Alexa, which was launched in India two years ago, understands in the nation. That is changing today.

At a press conference in New Delhi on Wednesday, the e-commerce giant said Alexa now supports Hindi, a language spoken by roughly half a billion people in India, as the company looks to expand its reach in the nation. Bringing support for Hindi to Alexa was in the works for more than a year, company executives said, noting the unique contextual, cultural and content-related challenges that Hindi implementation posed.

Users can now ask Alexa their questions in Hindi, and the digital assistant will be able to respond in the same language. The feature, which will begin rolling out through a software update to Alexa devices starting today, currently only supports one voice type for Hindi. (For English, Alexa offers multiple voice types.) In the months to come, Amazon said it plans to add support for multilingual households, which will enable members of the family to interact with Alexa in the language they each prefer.

Support for local languages has proven immensely beneficial to customers in the past, Manish Tiwari, head of devices category business for Amazon India, said at the event. Amazon last year introduced support for Hindi language on its apps and website. It has seen Hindi usage grow on the site and app by six times in recent months, he said.

Rohit Prasad, VP and head scientist of Alexa AI at Amazon, said the adoption of Alexa in India has been phenomenal, though he did not share any figures. Prior to today’s update, Alexa supported some Hinglish words, a combination of English and Hindi, but the company said it wanted to bring full-fledged support.

“A lot of how people in India engage with their smartphones and internet services is different from those in the United States. For instance, in India, people often search the name of an actor instead of the singer or the band when they are looking for a particular song,” he added. Alexa supports variants of about 15 languages, executives said. 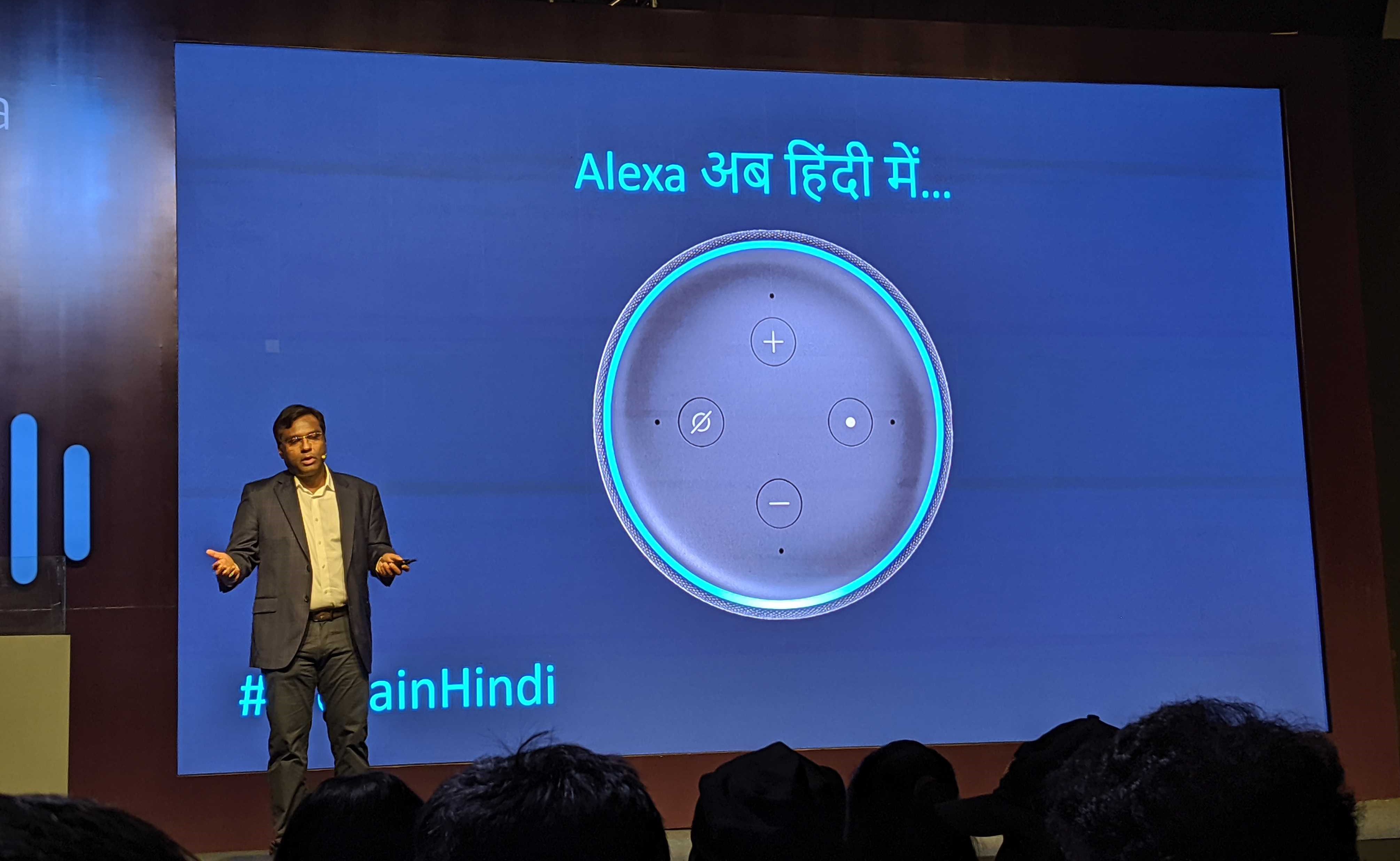 Amazon exec Prasad onstage at an event in New Delhi

Amazon says it offers Alexa customers in India more than 30,000 skills across various categories, including cricket, education and Bollywood. The company’s voice assistant is available to users through its smart speakers — Echo Dot, Echo Plus and more — and over three-dozen devices from other manufacturers, including Sony, iBall and LG, the company said.

Hindi should also help Amazon’s smart speakers maintain their lead over Google’s in India. Amazon commanded the local smart speakers market with a 59% market share in 2018, according to research firm IDC. (Google launched its smart speakers in India months after Amazon. IDC has not updated its findings since March this year.)

Both companies are locked in a global battle to win users through their digital voice assistants. And they should be: In many markets, including India, first-time internet users are increasingly showing that they are more comfortable engaging with their phones through voice instead of typing. Search through voice queries is growing by 270% year-over-year.