People win prestigious prizes in tech all the time, but there is something different about The Bold Prize. Unless you’ve been living under a literal or proverbial rock, you’ve probably heard something about the late Jeffrey Epstein, a notorious child molester and human trafficker who also happened to be a billionaire philanthropist and managed to become a ubiquitous figure in certain elite science and tech circles.

And if you’re involved in tech, the rock you’ve been living under would have had to be fully insulated from the internet to avoid reading about Epstein’s connections with MIT’s Media Lab, a leading destination for the world’s most brilliant technological minds, also known as “the future factory.”

This past week, conversations around the Media Lab were hotter than the fuel rods at Fukushima, as The New Yorker’s Ronan Farrow, perhaps the most feared and famous investigative journalist in America today, blasted out what for some were new revelations that Bill Gates, among others, had given millions of dollars to the Media Lab at Jeffrey (no fucking relation, thank you very much!) Epstein’s behest. Hours after Farrow’s piece was published, Joi Ito, the legendary but now embattled Media Lab director, resigned.

But well before before Farrow weighed in or Ito stepped away, students, faculty, and other leaders at MIT and far beyond were already on full alert about this story, thanks in large part to Arwa Michelle Mboya, a graduate student at the Media Lab, from Kenya by way of college at Yale, where she studied economics and filmmaking and learned to create virtual reality. Mboya, 25, was among the first public voices (arguably the very first) to forcefully and thoughtfully call on Ito to step down from his position.

Imagine: you’re heading into the second year of your first graduate degree, and you find yourself taking on a man who, when Barack Obama took over Wired magazine for an issue as guest editor, was one of just a couple of people the then sitting President of the United States asked to personally interview. And imagine that man was the director of your graduate program, and the reason you decided to study in it in the first place.

Imagine the pressure involved, the courage required. And imagine, soon thereafter, being completely vindicated and celebrated for your actions. 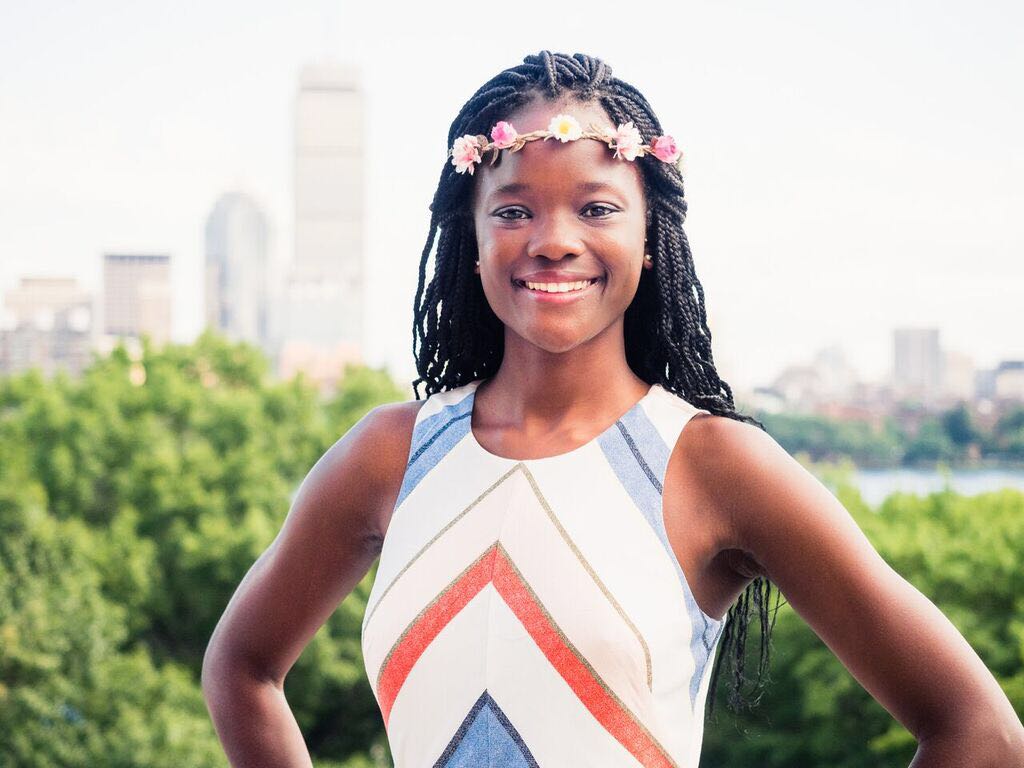 That is precisely the journey that Arwa Mboya has been on these past few weeks, including when human rights technologist Sabrina Hersi Issa decided to crowd-fund the Bold Prize to honor Mboya’s courage, which has now brought in over $10,000 to support her ongoing work (full disclosure: I am among the over 120 contributors to the prize).

Mboya’s advocacy was never about Joi Ito personally. If you get to know her through the interview below, in fact, you’ll see she doesn’t wish him ill.

As she wrote in MIT’s The Tech nine days before Farrow’s essay and ten before Ito’s resignation, “This is not an MIT issue, and this is not a Joi Ito issue. This is an international issue where a global network of powerful individuals have used their influence to secure their privilege at the expense of women’s bodies and lives. The MIT Media Lab was nicknamed “The Future Factory” on CBS’s 60 Minutes. We are supposed to reflect the future, not just of technology but of society. When I call for Ito’s resignation, I’m fighting for the future of women.”

From the moment I read it, I thought this was a beautiful and truly bold statement by a student leader who is an inspiring example of the extraordinary caliber of student that the Media Lab draws.

But in getting to know her a bit since reading it, I’ve learned that her message is also about even more. It’s about the fact that the women and men who called for a new direction in light of Jeffrey Epstein’s abuses and other leaders’ complicity did so in pursuit of their own inspiring dreams for a better world.

Arwa, as you’ll see below, spoke out at MIT because of her passion to use tech to inspire radical imagination among potentially millions of African youth. As she discusses both the Media Lab and her broader vision, I believe she’s already beginning to provide that inspiration.

Greg Epstein: You have had a few of the most dramatic weeks of any student I’ve met in 15 years as a chaplain at two universities. How are you doing right now?

Arwa Mboya: I’m actually pretty good. I’m not saying that for the sake of saying. I have a great support network. I’m in a lab where everyone is amazing. I’m very tired, I’ll say that. I’ve been traveling a lot and dealing with this while still trying to focus on writing a thesis. If anything, it’s more like overwhelmed and exhausted as opposed to not doing well in and of itself.

Epstein: Looking at your writing — you’ve got a great Medium blog that you started long before MIT and maintained while you’ve been here — it struck me that in speaking your mind and heart about this Media Lab issue, you’ve done exactly what you set out to do when you came here. You set out to be brave, to live life, as the Helen Keller quote on your website says, as either a great adventure or nothing.

Also, when you came to the Media Lab, you were the best-case scenario for anyone who works on publicizing this place. You spoke and wrote about the Lab as your absolute dream. When you were in Africa, or Australia, or at Yale, how did you come to see this as the best place in the world for you to express the creative and civic dreams that you had?

Mboya: That’s a good question — what drew me here? The Media Lab is amazing. I read Whiplash, which is Joi Ito’s book about the nine principles of the Media Lab, and it really resonated with me. It was a place for misfits. It was a place for people who are curious and who just want to explore and experiment and mix different fields, which is exactly what I’ve been doing before.

From high school, I was very narrow in my focus; at Yale I did Econ and film, so that had a little more edge. After I graduated I insisted on not taking a more conventional path many students from Yale take, so [I] moved back to Kenya and worked on many different projects, got into adventure sports, got into travel more.

Epstein: Your website is full of pictures of you flipping over, skydiving, gymnastics — things that require both strength and courage.

Mboya: I’d always been an athlete, loved the outdoors.

I remember being in Vietnam; I’d never done a backflip. I was like, “Okay, I’m going to learn how to do this.” But it’s really scary jumping backwards; the fear. Is, you can’t see where you’re going. I remember telling myself, ” Okay, just jump over the fear. Just shut it off and do it. Your body will follow.” I did and I was like, “Oh, that was easy.” It’s not complicated. Most people could do it if they just said, “Okay, I’ll jump.”

It really stuck with me. A lot of decisions I’ve [since] made, that I’m scared of, I think, “Okay, just jump, and your body will follow.” The Media Lab was like that as well.

I really wanted to go there, I just didn’t think there was a place for me. It was like, I’m not techie enough, I’m not anything enough. Applying was, ’just jump,’ you never know what will happen. 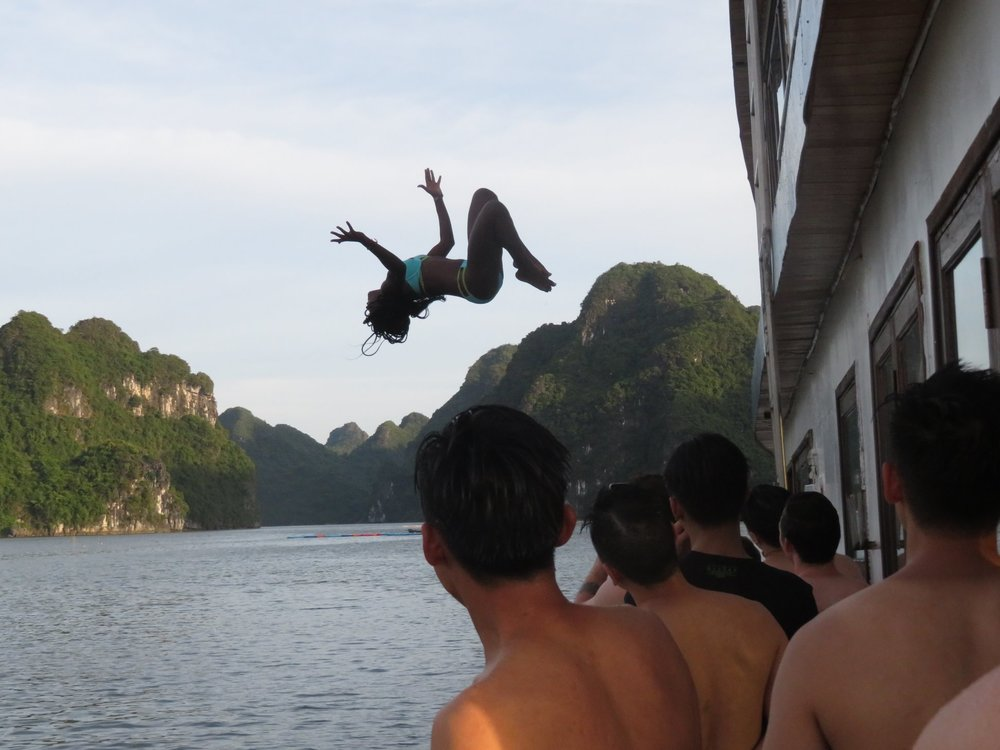 Epstein: Back when you were applying, you wrote about experiencing what applicants to elite schools often call “imposter syndrome.” This is where I want to be, but will they want me?