As the antitrust investigations stack up on US tech giants’ home turf there’s no sign of pressure letting up across the pond.

European Commission president-elect Ursula von der Leyen today unveiled her picks for the next team of commissioners who will take up their mandates on November 1 — giving an expanded role to competition commissioner Margrethe Vestager. The pick suggests the next Commission is preparing to dial up its scrutiny of big tech’s data monopolies.

Under the draft list of commissioners-designate, which still needs to be approved in full by the European Parliament, Vestager has been named executive VP overseeing a new portfolio called ‘Europe fit for the digital age’.

But, crucially, she will also retain the competition portfolio — which implies attention on growing Europe’s digital economy will go hand in glove with scrutiny of fairness in ecommerce and ensuring a level playing field vs US platform giants.

“Executive vice-president Margrethe Vestager will lead our work on a Europe fit for the digital age,” said von der Leyen at a press conference to announce her picks. “Digitalization has a huge impact on the way we live, we work, we communicate. In some fields Europe has to catch up — for example in the field of business to consumer but in other fields we’re excellent. Europe is the frontrunner, for example in business to business, when we talk about digital twins of products and procedures.

“We have to make more out of the field of artificial intelligence. We have to make our single market a digital single market. We have to use way more the big data that is out there but we don’t make enough out of it. What innovation and startups are concerned. It’s not only need to know but it’s need to share big data. We have to improve on cyber security. We have to work hard on our technological sovereignty just to name a few issues in these broad topics.

If tech giants were hoping for Europe’s next Commission to pay a little less attention to question marks hanging over the fairness of their practices they’re likely to be disappointed as Vestager is set to gain expanded powers and a broader canvas to paint on. The new role clearly positions her to act on the review of competition policy she instigated towards the end of her current mandate — which focused on the challenges posed by digital markets.

Since taking over as Europe’s competition chief back in 2014, Vestager has made a name for herself by blowing the dust off the brief and driving forward on a series of regulatory interventions targeting tech giants including Amazon, Apple and Google. In the latter case this has included opening a series of fresh probes as well as nailing the very long running Google Shopping saga inherited from her predecessor.

The activity of the department under her mandate has clearly catalyzed complainants — creating a pipeline of cases for her to tackle. And just last month Reuters reported she had been preparing an “intensive” handover of work looking into complaints against Google’s job search product to her successor — a handover that won’t now be necessary, assuming the EU parliament gives its backing to von der Leyen’s team.

While the competition commissioner has thus far generated the biggest headlines for the size of antitrust fines she’s handed down — including a record-breaking $5BN fine for Google last year for illegal restrictions attached to Android — her attention on big data holdings as a competition risk is most likely to worry tech giants going forward.

See, for example, the formal investigation of Amazon’s use of merchant data announced this summer for a sign of the direction of travel.

Vestager has also talked publicly about regulating data flows as being a more savvy route to control big tech versus swinging a break up hammer. And while — on the surface — regulating data might sound less radical a remedy than breaking giants like Google and Facebook up, placing hard limits on how data can be used has the potential to effect structural separation via a sort of regulatory keyhole surgery that’s likely to be quicker and implies a precision that may also make it more politically palatable.

That’s important given the ongoing EU-US trade friction kicked up by the Trump administration which is never shy of lashing out, especially at European interventions that seek to address some of the inequalities generated by tech giants — most recently Trump gave France’s digital tax plans a tongue-lashing.

von der Leyen was asked during the press conference whether Vestager might not been seen as a controversial choice given Trump’s views of her activity to date (Europe’s “tax lady” is one of the nicer things he’s said about Vestager). The EU president-elect dismissed the point saying the only thing that matters in assigning Commission portfolios is “quality and excellence”, adding that competition and digital is the perfect combination to make the most of Vestager’s talents.

“Vestager has done an outstanding job as a commissioner for competition,” she went on. “At competition and the issues she’s tackling there are closely linked to the digital sector too. So having her as an executive vice-president for the digital in Europe is absolutely a perfect combination.

“She’ll have this topic as a cross-cutting topic. She’ll have to work on the Digital Single Market. She will work on the fact that we want to use in a better way big data that is out there, that we collect every day — non-personalized data. That we should use way better, in the need for example to share with others for innovation, for startups, for new ideas.

“She will work on the whole topic of cyber security. Which is the more we’re digitalized, the more we’re vulnerable. So there’s a huge field in front of her. And as she’s shown excellence in the Commission portfolio she’ll keep that — the executive vice-presidents have with the DGs muscles to deal with their vast portfolios’ subject they have to deal with.”

In other choices announced today, the current commissioner for Digital Economy and Society, Mariya Gabriel, will be taking up a new portfolio called ‘Innovation and Youth’. And Sylvie Goulard was named as ‘Internal Market’ commissioner, leading on industrial policy and promoting the Digital Single Market, as well as getting responsibility for Defence Industry and Space.

Another executive VP choice, Valdis Dombrovskis, looks likely to be tackling thorny digital taxation issues — with responsibility for co-ordinating the Commission’s work on what’s been dubbed an “Economy that Works for People”, as well as also being commissioner for financial services.

In prepared remarks on that role, von der Leyen said: “We have a unique social market economy. It is the source of our prosperity and social fairness. This is all the more important when we face a twin transition: climate and digital. Valdis Dombrovskis will lead our work to bring together the social and the market in our economy.”

Frans Timmermans, who was previously in the running as a possible candidate for Commission president but lost out to von der Leyen, is another exec VP pick. He’s set to be focused on delivering a European Green Deal and managing climate action policy.

Another familiar face — current justice, consumer and gender affairs commissioner, Věra Jourová — has also been named as an exec VP, gaining responsibility for “Values and Transparency”, a portfolio title which suggests she’ll continue to be involved in EU efforts to combat online disinformation on platforms.

The rest of the Commission portfolio appointments can be found here.

There are 26 picks in all — 27 counting von der Leyen who has already been confirmed as president; one per EU country. The UK has no representation in the next Commission given it is due to leave the bloc on October 31, the day before the new Commission takes up its mandate.

von der Leyen touted the team she presented today as balanced and diverse, including on gender lines as well as geographically to take account of the full span of European Union members.

“It draws on all the strength and talents, men and women, experienced and young, east and west, south and north, a team that is well balanced, a team that brings together diversity of experience and competence,” she said. “I want a Commission that is led with determination, that is clearly focused on the issues at hand — and that provides answers.” 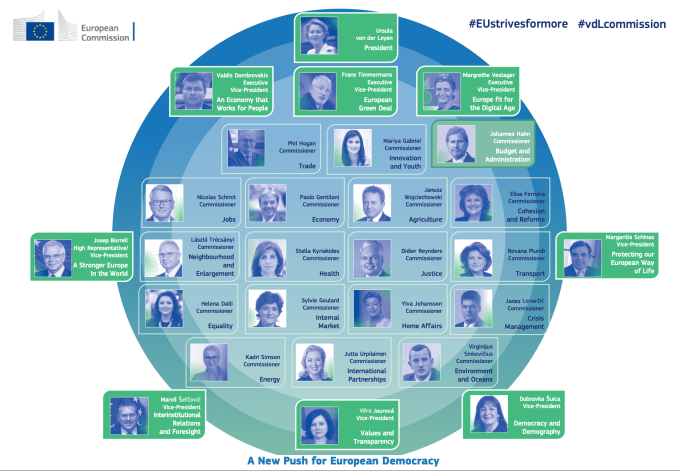 “There’s one fundamental that connects this team: We want to bring new impetus to Europe’s democracy,” she added. “This is our joint responsibility. And democracy is more than voting in elections in every five years; it is about having your voice heard. It’s about having been able to participate in the way our society’s built. We gave to address some of the deeper issues in our society that have led to a loss of faith in democracy.”

In a signal of her intention that the new Commission should “walk the talk” on making Europe fit for the digital age she announced that college meetings will be paperless and digital.

On lawmaking, she added that there will be a one-in, one-out policy — with any new laws and regulation supplanting an existing rule in a bid to cut red tape.

Von der Leyen has also previously said reducing bureaucracy for startups is a priority, writing in her Agenda For Europe that “we need more young and nimble innovators with breakthrough technologies, like this generation’s tech giants were only a decade ago”, and pledging to “make it easier for small businesses to become large innovators”.

The shape of the next Commission remains in draft pending approval by the European Parliament to all the picks. The parliament must vote to accept the entire college of commissioners — a process that’s preceded by hearings of the commissioners-designate in relevant parliamentary committees.