Parallel Markets is a new startup aiming to make it as easy to buy and sell private company shares as it is to buy public company stock.

COO Nicholas Goss said this is becoming an issue for startups as they stay private longer, which means early employees can find their equity locked up for longer periods of time — and that’s assuming they can even afford to exercise their stock options.

“This is the type of thing that’s really changing the game when it comes to attracting talent,” Goss said.

CTO Brian Muller added, “There’s a pent-up demand, both for the ability to sell and the ability to buy … We’re bringing our platform into the mix to work directly with issuers to support that liquidity in a structured way.”

That idea of working with issuers (in other words, the companies whose stock is being sold) is a big part of what the Parallel Markets team said distinguishes them from other secondary marketplaces, which they described as focused primarily on targeting employees and investors with private stock. Co-founder and CEO Tony Peccatiello said that while these sales usually happen without involving the company throughout the process, Parallel Markets is taking a different approach, one that “puts the control over these transactions in the hands of a CFO.”

In other words, Parallel Markets will work with company executives to create what Peccatiello described as “structured liquidity events,” where employees can sell their stock to designated buyers at a given time. The platform also gives the companies additional controls, like setting floors and ceilings on the price per share.

Meanwhile, all the employees get notified when there’s an opportunity to sell their stock. And the sales are handled by Parallel Markets’ subsidiary broker dealer in a way that’s compliant with the various regulations.

Peccatiello said the startup — which has raised $1.4 million itself from friends and family — is already working with some initial partners, although it hasn’t actually powered any stock purchases yet: “We expect to be doing those in Q4 of this year.”

Goss (who previously worked as an IPO lawyer at Latham & Watkins, as well as on the investment banking team at Credit Suisse) predicted that over time, startups will make this a bigger part of their compensation packages, where it “almost mimics in reverse the vesting cliff,” so there’s not just a schedule for receiving stock, but also “when you can start selling into these liquidity events.” 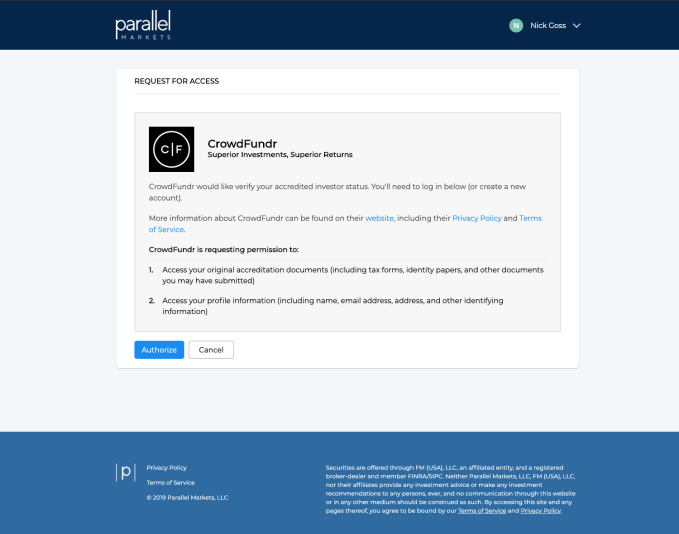 He explained that equity crowdfunding sites, plus other platforms that work with accredited investors, currently need to subject those investors to “a lengthy and arduous on-boarding process” that involves uploading a variety of documents to confirm their accredited status.

With Passport, on the other hand, investors can go through the verification process just one time. After that, when they’re looking to invest through a platform that uses Passport, they can simply click a button to give Passport permission to share their information.

“We looked for partners who could provide this, but we did not find anyone who could provide an ongoing identity verification tool that worked across multiple platforms,” Peccatiello told me in a follow-up email. “We want identity to be truly portable — not only on other third-party websites but also places like the blockchain, which provides an interesting use case with smart contracts.”

Updated to clarify Peccatiello’s comparison with other secondary markets.

In hot market for secondary shares, one player, Equidate, just locked down $50 million in new funding