It is probably not a coincidence that Starboard Value invests in companies whose stock has taken a bad turn. Box’s share price has been on a roller coaster ride in the years since 2015, when its stock was priced initially at $14.00/share but then surged to $23.23 on its opening day. In recent years, its share price has gone as high as $28.12, but the declines have been steep: its 52-week low is $12.46 per share. 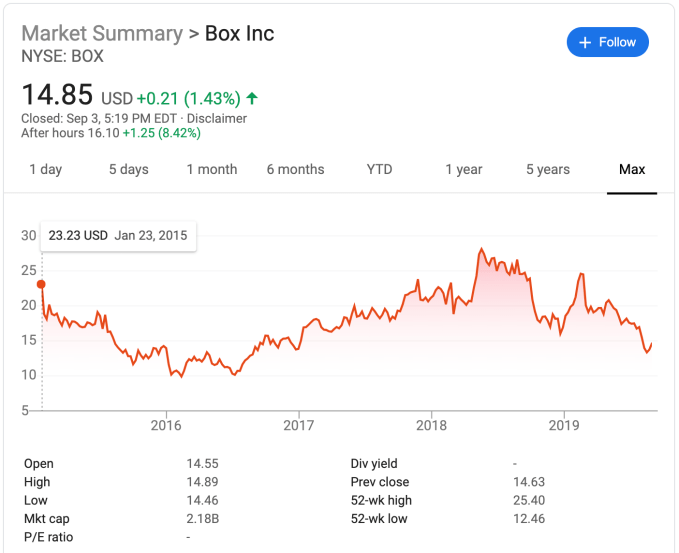 “While we do not comment on interactions with our investors, Box is committed to maintaining an active and engaged dialogue with stockholders. The Board of Directors and management team are focused on delivering growth and profitability to drive long-term stockholder value as we continue to pioneer the Cloud Content Management market,” a Box spokesperson told TechCrunch.

Indeed, it is too early to tell what Starboard’s investment will mean longer term. But more generally, it has been known to take a very active role in its portfolio companies, sometimes increasing its stake to secure places on the board and using that position to advocate management changes, restructuring, sales and more.

And Box is now, in a sense, on notice. From Starboard’s filing:

Box began life as a consumer storage company but made the transition to enterprise software several years after it launched in 2005. It raised more than $500 million along the way, and it was a Silicon Valley SaaS darling until it filed its S-1 in 2014.

That S-1 revealed massive sales and marketing spending, and critics came down hard on the company. That led to one of the longest IPO delays in memory, taking nine months from the time the company filed until it finally had its IPO in January 2015.

Levie will be appearing at TechCrunch Sessions: Enterprise on Thursday.

We emailed Starboard Value for comment on this article. Should it respond, we will update the article.