It has been one week since U.S. border officials denied entry to a 17-year-old Harvard freshman just days before classes were set to begin.

Ismail Ajjawi, a Palestinian student living in Lebanon, had his student visa canceled and was put on a flight home shortly after arriving at Boston Logan International Airport. Customs & Border Protection officers searched his phone and decided he was ineligible for entry because of his friends’ social media posts. Ajjawi told the officers he “should not be held responsible” for others’ posts, but it was not enough for him to clear the border.

The news prompted outcry and fury. But TechCrunch has learned it was not an isolated case.

Since our story broke, we came across another case of a U.S. visa holder who was denied entry to the country on grounds that he was sent a graphic WhatsApp message. Dakhil — whose name we have changed to protect his identity — was detained for hours, but subsequently had his visa canceled. He was sent back to Pakistan and banned from entering the U.S. for five years.

Since 2015, the number of device searches has increased four-fold to over 30,200 each year. Lawmakers have accused the CBP of conducting itself unlawfully by searching devices without a warrant, but CBP says it does not need to obtain a warrant for device searches at the border. Several courts have tried to tackle the question of whether or not device searches are constitutional.

Abed Ayoub, legal and policy director at the American-Arab Anti-Discrimination Committee, told TechCrunch that device searches and subsequent denials of entry had become the “new normal.”

As a Pakistani national, Dakhil needed a visa to enter the U.S. He obtained a B1/B2 visa, which allowed him to temporarily enter the U.S. for work and to visit family. Months later, he arrived at George Bush Intercontinental Airport in Houston, Texas, tired but excited to see his cousin for the first time in years.

It didn’t take long before Dakhil realized something wasn’t right.

Dakhil, who had never traveled to the U.S. before, was waiting in the immigration line at the border when a CBP officer approached him to ask why he had traveled to the U.S. He said it was for a vacation to visit his family. The officer took his passport and, after a brief examination of its stamps, asked why Dakhil had visited Saudi Arabia. It was for Hajj and Umrah, he said. As a Muslim, he is obliged to make the pilgrimages to Mecca at least once in his lifetime. The officer handed back his passport and Dakhil continued to wait in line.

At his turn, Dakhil approached the CBP officer in his booth, who repeated much of the same questions. But, unsatisfied with his responses, the officer took Dakhil to a small room close but separate from the main immigration hall.

“He asked me everything,” Dakhil told TechCrunch. The officer asked about his work, his travel history and how long he planned to stay in the U.S. He told the officer he planned to stay for three months with a plan to travel to Disney World in Florida and later New York City with his wife and newborn daughter, who were still waiting for visas.

The officer then rummaged through Dakhil’s carry-on luggage, pulling out his computer and other items. Then the officer took Dakhil’s phone, which he was told to unlock, and took it to another room.

For more than six hours, Dakhil was forced to sit in a bright, cold and windowless airport waiting room. There was nowhere to lie down. Others had pushed chairs together to try to sleep. 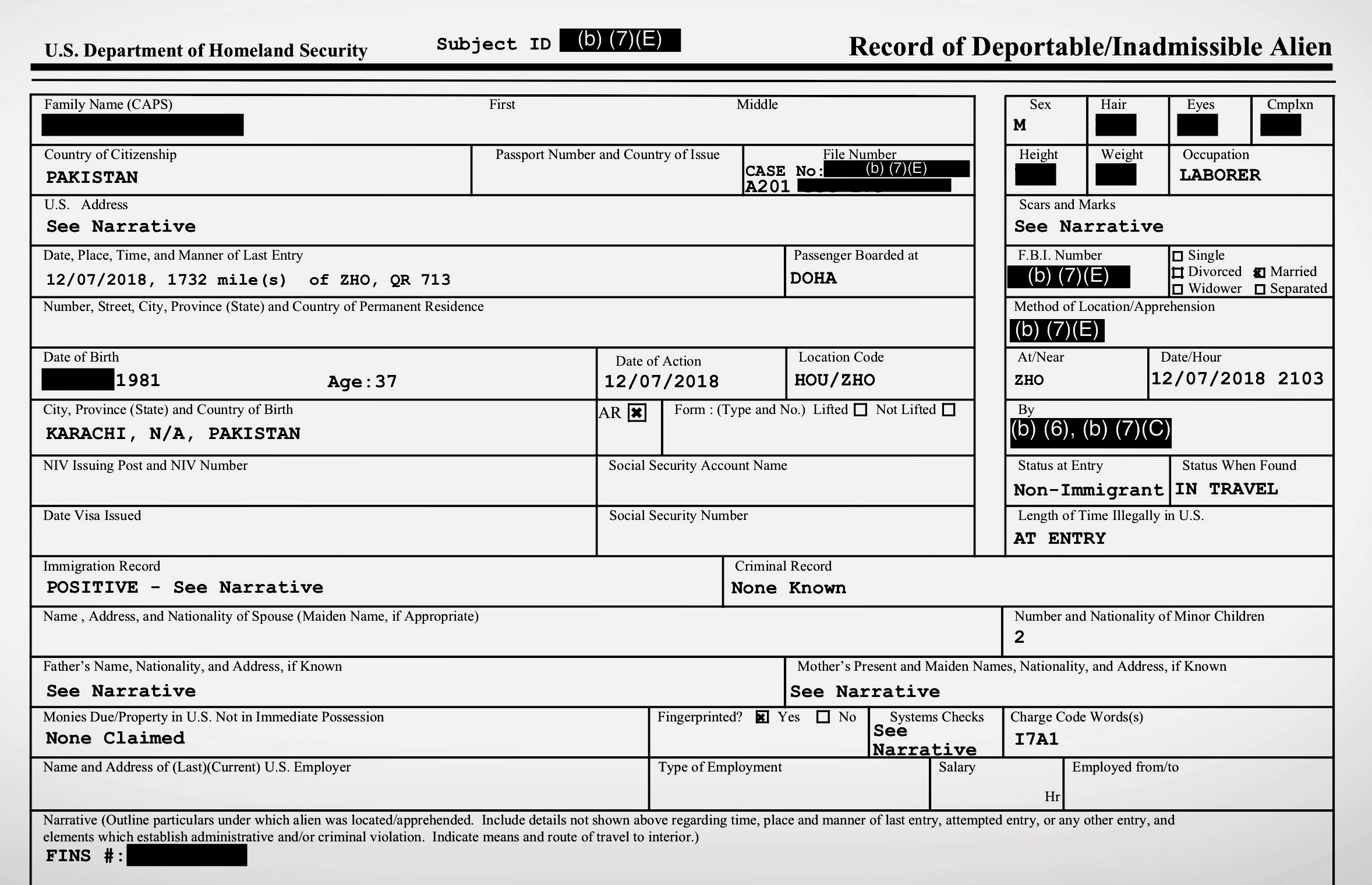 Dakhil said when the officer returned, the questioning continued. The officer demanded to know more about what he was planning to do in the U.S. One line of questioning focused on an officer’s accusation that Dakhil was planning to work at a gas station owned by his cousin — which Dakhil denied.

“I told him I had no intention to work,” he told TechCrunch. The officer continued with his line of questioning, he said, but he continued to deny that he wanted to stay or work in the U.S. “I’m quite happy back in Karachi and doing good financially,” he said.

Two more officers had entered the room and began to interrogate him as the first officer continued to search bags. At one point he pulled out a gift for his cousin — a painting with Arabic inscriptions.

But Dakhil was convinced he would be allowed entry — the officers had found nothing derogatory, he said.

“Then the officer who took my phone showed me an image,” he told TechCrunch. It was an image from 2009 of a child, who had been murdered and mutilated. Despite the graphic nature of the image, TechCrunch confirmed the photo was widely distributed on the internet and easily searchable using the name of the child’s murderer.

“I was shocked. What should I say?” he told TechCrunch, describing the panic he felt. “This image is disturbing, but you can’t control the forwarded messages,” he explained.

Dakhil told the officer that the image was sent to him in a WhatsApp group. It’s difficult to distinguish where a saved image came from on WhatsApp, because it automatically downloads received images and videos to a user’s phone. Questionable content — even from unsolicited messages — found during a border search could be enough to deny the traveler entry.

The image was used to warn parents about kidnappings and abductions of children in his native Karachi. He described it as one of those viral messages that you forward to your friends and family to warn parents about the dangers to their children. The officer pressed for details about who sent the message. Dakhil told the officer that the sender was someone he met on his Hajj pilgrimage in 2011.

“We hardly knew each other,” he said, saying they stayed in touch through WhatsApp but barely spoke.

Dakhil told the officer that the image could be easily found on the internet, but the officer was more interested in the names of the WhatsApp group members.

“You can search the image over the internet,” Dakhil told the officer. But the officer declined and said the images were his responsibility. “We found this on your cellphone,” the officer said. At one point the officer demanded to know if Dakhil was organ smuggling.

After 15 hours answering questions and waiting, the officers decided that Dakhil would be denied entry and would have his five-year visa cancelled. He was also told his family would also have their visas cancelled. The officers asked Dakhil if he wanted to claim for asylum, which he declined.

“I was treated like a criminal,” Dakhil said. “They made my life miserable.”

It’s been almost nine months since Dakhil was turned away at the U.S. border.

He went back to the U.S. Embassy in Karachi twice to try to seek answers, but embassy officials said they could not reverse a CBP decision to deny a traveler entry to the United States. Frustrated but determined to know more, Dakhil asked for his records through a Freedom of Information Act (FOIA) request — which anyone can do — but had to pay hundreds of dollars for its processing.

He provided TechCrunch with the documents he obtained. One record said that Dakhil was singled out because his name matched a “rule hit,” such as a name on a watchlist or a visit to a country under sanctions or embargoes, which typically requires additional vetting before the traveler can be allowed into the U.S.

The record did not say what flagged Dakhil for additional screening, and his travel history did not include an embargoed country. 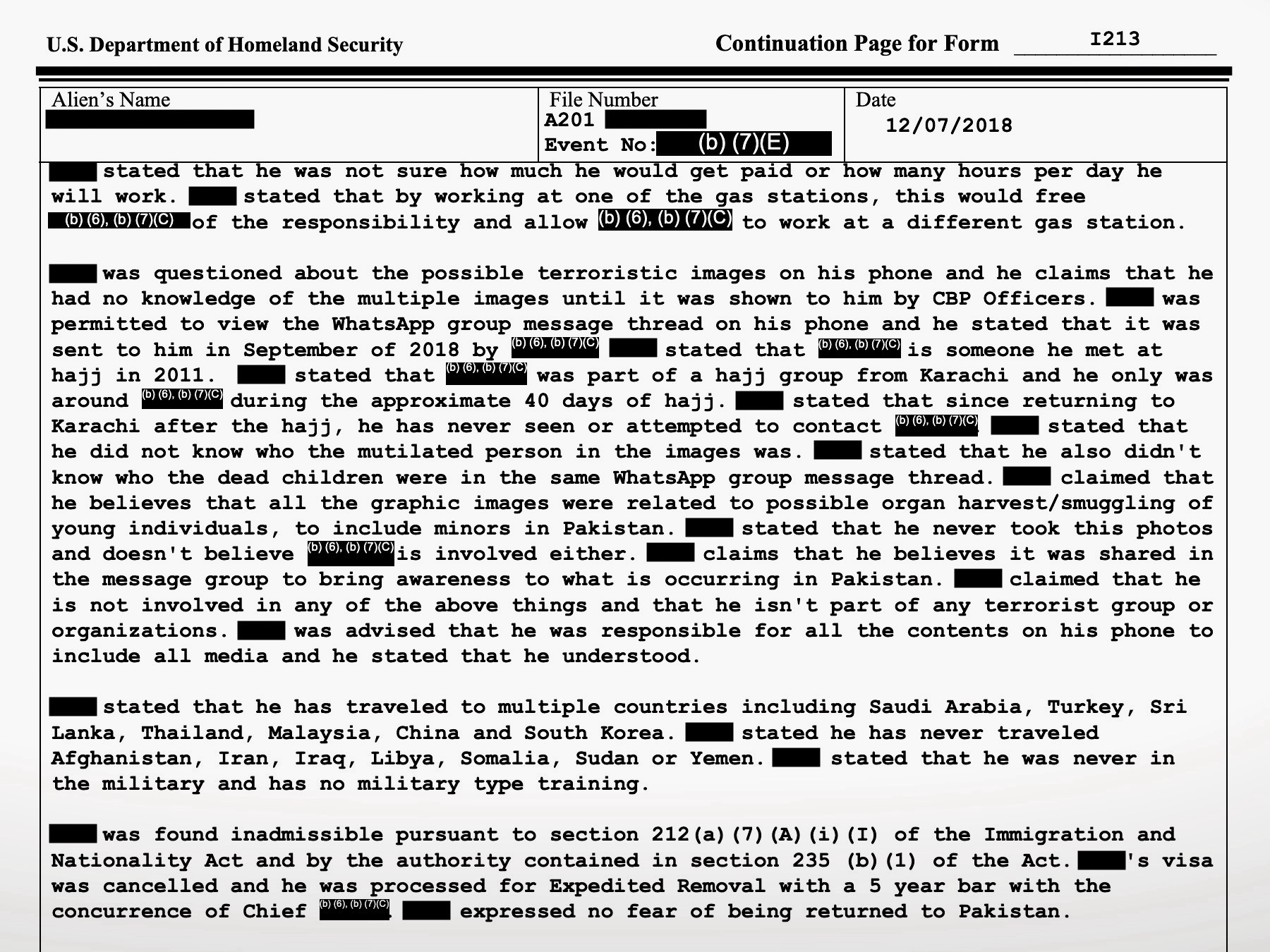 CBP’s reason for denying entry to Dakhil obtained through a FOIA request.

One document said CBP denied Dakhil entry to the U.S. “due to the derogatory images found on his cellphone,” and his alleged “intent to engage in unauthorized employment during his entry.” But Dakhil told TechCrunch that he vehemently denies the CBP’s allegations that he was traveling to the U.S. to work.

He said the document portrays a different version of events than what he experienced.

“They totally changed this scenario,” he said, rebutting several remarks and descriptions reported by the officers. “They only disclosed what they wanted to disclose,” he said. “They want to justify their decision, so they mentioned working in a gas station by themselves,” he claimed.

The document also said Dakhil “was permitted to view the WhatsApp group message thread on his phone and he stated that it was sent to him in September 2018,” but this was not enough to satisfy the CBP officers who ruled he should be denied entry. The document said Dakhil stated that he “never took this photo and doesn’t believe [the sender is] involved either,” but he was “advised that he was responsible for all the contents on his phone to include all media and he stated that he understood.”

The same document confirmed the contents of his phone was uploaded to the CBP’s central database and provided to the FBI’s Joint Terrorism Task Force.

Dakhil was “found inadmissible” and was put on the next flight back to Karachi, more than a day after he was first approached by the CBP officer in the immigration line.

A spokesperson for Customs & Border Protection declined to comment on individual cases, but provided a boilerplate statement.

“CBP is responsible for ensuring the safety and admissibility of the goods and people entering the United States. Applicants must demonstrate they are admissible into the U.S. by overcoming all grounds of inadmissibility including health-related grounds, criminality, security reasons, public charge, labor certification, illegal entrants and immigration violations, documentation requirements, and miscellaneous grounds,” the spokesperson said. “This individual was deemed inadmissible to the United States based on information discovered during the CBP inspection.”

CBP said it also has the right to cancel visas if a traveler is deemed inadmissible to the United States.

It’s unlikely Dakhil will return to the U.S., but he said he had hope for the Harvard student who suffered a similar fate.

“Let’s hope he can fight and make it,” he said.