Software APIs help different tools communicate with one another, let developers access essential services without having to code it themselves and are critical components for driving a platform-driven strategy. Yet they require solid documentation to help make the best use of them. ReadMe, a startup that helps companies customize their API documentation, announced a $9 million Series A today led by Accel with help from Y Combinator. The company was part of the Y Combinator Winter 2015 cohort.

Prior to today’s funding announcement, the company had taken just a $1.2 million seed round in 2014. Today, it reports 3,000 paying customers and that it has been profitable for the last several years, an unusual position for a startup. In spite of this success, co-founder and CEO Gregory Koberger said as the company has taken on larger customers, they have more sophisticated requirements, and that prompted them to take this round of funding.

In addition, it has expanded the platform to use a company’s API logs to help create more dynamic documentation and improve customer support kinds of scenarios. But by taking on data from other companies, it needs to make sure the data is secure, and today’s funding will help in that regard.

“We’re going to still build the company traditionally by hiring more engineers, more support people, more designers, the obvious stuff, but the main impetus for doing this was that we started working with bigger companies with more secure data. So a lot of the money is going to help make sure that we handle that right,” Koberger explained. 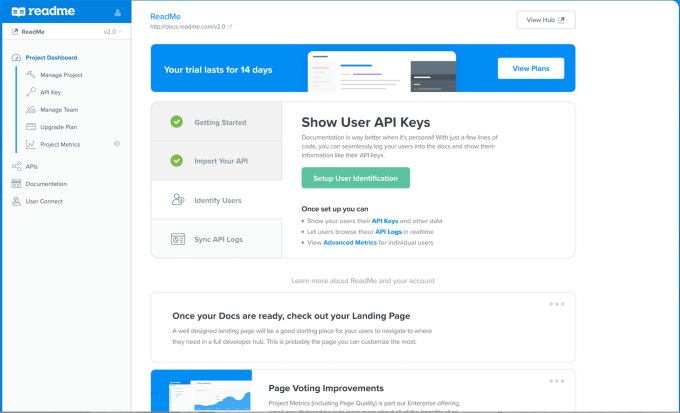 He says this ability to make use of the API logs has opened up all kinds of possibilities for the company, as the data provides a valuable window into how people use the APIs. “It’s amazing how much you get by just actually seeing what the server sees. When people are having problems with an API, they can debug it themselves because they can actually see the problems, the support team can see it as well,” Koberger said.

Accel’s Dan Levine, whose firm is leading the investment, believes that having good documentation is the difference between making and breaking an API. “APIs don’t just create technical integration, they create ecosystems around core services and underpin corporate partnerships that generate billions of dollars. ReadMe is as much a strategy as it is a service for businesses. Providing clean, interactive, data-driven API documentation to make developers love working with you can be the difference between 100 partnerships or 1,000 partnerships,” Levine said.

ReadMe was founded in 2014. It has 22 employees in their San Francisco office, a number that should increase with today’s funding.