Starship Technologies invented the category of rolling autonomous sidewalk delivery robots, and to date, the company has made more than 100,000 commercial deliveries on behalf of customers. The milestone comes as Starship adds $40 million in Series A funding, bringing its total funding to $85 million. When it announced an additional $25 million in June 2018, Starship was also piloting its first university deployment — and now the company has a plan to expand to 100 university campuses over the next two years based on the strength of that pilot.

“When I came on board, I was testing a whole bunch of different go-to-market strategies,” explained Starship Technologies CEO Lex Bayer. “We were testing grocery delivery, university campuses, corporate campuses, industrial campuses, and we’ve actually seen tremendous traction on most of these environments. Our grocery business north of London, in Milton Keynes, is going exceptionally well […] But one of the experiments was to try university campuses. And I think as a company that’s a startup still, we have to always focus and have sequencing in terms of how we grow. And the university campus has just been pulling our business forward — not only our students pulling it, meaning there are more orders than the restaurant or the robots can keep up with and we had to add restaurants and add hours. And so we’ve seen signal from the students, but we’ve also seen signal from universities reaching out to us, and from the food service providers.”

This vertical focus on post-secondary schools will see Starship robots deployed at the University of Pittsburgh today, and Purdue University in Indiana on September 9, with many more to follow. Starship’s ambitious goal is to deploy at 100 schools within the next two years, as mentioned, and it’s going to be using this funding in pursuit of that expansion. The market appetite is strong, as Bayer notes, and it’s a way to show that the robots can operate in all kinds of environments, in and among campuses that blend seamlessly with public city streets and sidewalks. Plus, the student population has proven the ideal initial customer base. 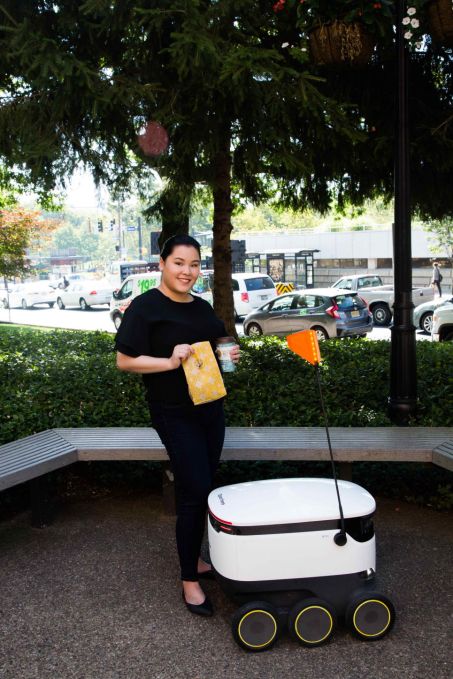 And that perceived normalcy leads to high utilization: One of the robots serving one of the universities where Starship operates manages to drive the equivalent of the distance between San Francisco and New York City, which is quite an accomplishment when you consider that they only travel at a top speed of four miles per hour. Starship’s all-electric delivery robots have, in total, racked up 350,000 miles across its delivery trips, and delivered 9,000 rolls and 15,000 bananas, among various other grocery and food items.

“The first few years were really proving that this could be done, and that this technology is even possible,” Bayer explained. “And so it took us four years to get to the first 10,000 deliveries. And then it took us eight months to go from 10,000 deliveries to 50,000 deliveries, and now it’s taken us less than four months to get to 100,000. So that is a major milestone, and we’re the first autonomous vehicle company to do that. It’s something we’re obviously very proud of. But it really shows the sort of inflection that our company’s going through and how we’re really scaling up.”

Starship’s funding this round was led by Morpheus Ventures, and included existing investors Shasta Ventures, Matrix Partners, MetaPlanet Holdings and more, along with new investors TDK Ventures, Qu Ventures and others.