Porsche is upping its plug-in hybrid game with several new vehicles added to its lineup, including a power-packing 2020 Cayenne Turbo S E-Hybrid.

The plug-in version of this flagship SUV combines a 14.1-kilowatt-hour battery and 134-horsepower electric motor with a 4.0-liter twin turbocharged V8 engine found in the traditional gas-powered Cayenne Turbo. The electric motor is located between the V8 engine and its standard eight-speed transmission.

The upshot is a 670-horsepower plug-in beast that produces 663 pound-feet of torque and can travel from 0 to 60 miles per hour in 3.6 seconds. Not bad for an SUV.

But it’s not all about power. Porsche also increased the energy capacity of its battery, 30% more than the one used in previous generation plug-in hybrid Cayenne models. EPA fuel economy figures have not been released yet, but if it’s like other Porsche plug-in hybrids, the range will be somewhere around 20 or so miles.

The automaker has a number of nifty standard items in the Cayenne Turbo S E-Hybrid (and two new plug-in variants of the Cayenne Coupé), including a 7.2 kW onboard charger and 21-inch AeroDesign Wheels. The upgraded charger enables a complete recharge of the battery in as little as 2.4 hours when using a 240-volt connection with a 50-amp circuit, according to Porsche. 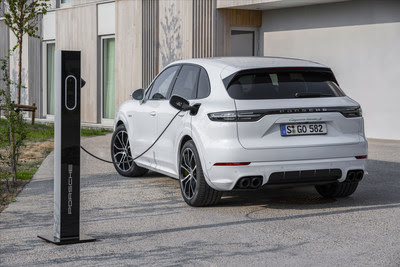 Porsche also took the wraps off of two other plug-in variants of its new Cayenne Coupé, a smaller, flashier version of the Cayenne. Both Cayenne Coupé variants feature a fixed spoiler above the rear window with a new adaptive rear spoiler below it that’s designed to enhance aerodynamic stability.

But the two high-end vehicles share many of the same standard items and stats. Both vehicles can travel from 0 to 60 miles per hour in 3.6 seconds and reach a top speed of 183 miles per hour, which is electronically limited.

Porsche also unveiled a less powerful and cheaper 455-horsepower Cayenne E-Hybrid Coupé that has a V6 engine and a base price of $86,400. This coupé version, which has the same powertrain as the Cayenne E-Hybrid, has a top speed of 157 mph and can travel from 0 to 60 in 4.7 seconds.